(1) On the longest day of the longest year, I did not sleep. I stood as witness with the maximum tilt of the Arctic Circle toward the sun.

(2) I live with my husband in Queens, the storied borough of New York City frequently cited as the most diverse place in one of the most diverse metropolises in the world. But when peeled away, diversity is exposed as disparity. At the peak of the Covid-19 pandemic, in April 2020, Queens, specifically its western triangle of Corona, Elmhurst, and Jackson Heights, was the epicenter of the epicenter.

(3) Friday, March 13, was my last trip to Manhattan before sheltering-in-place. On the subway my skin was prickly, my body vigilant. I picked up my running shoes from my office at Columbia University. I figured I’d stay fit and run in the mornings and “be productive” while waiting for the pandemic to stroll on by.

(4) From Rainer Maria Rilke’s Duino Elegies, the Second Elegy: “. . . we breathe ourselves out and away; from ember to ember / yielding a fainter scent. True, someone may tell us: / ‘You’ve got in my blood, the room, the Spring’s’ . . .”

(5) Neighborhoods with the highest number of Covid-19 cases per capita were areas with the lowest median incomes and the largest household size. Meaning: black and brown people. Queens is an immigrant, working-class enclave, most of its residents employed in service industries. The less you earn the more people you serve.

(6) I am an immigrant from Asia, a son of immigrants. Which is all about family, means togetherness. Village, colony, tribe. Power and survival in numbers. Dangerous antithesis.

(7) New Yorkers tolerate tiny apartments because we live publicly. We live in a cavernous theater. The wider cultural cosmology of our megalopolis.

(8) Mrs. Dalloway is unable to go out to get the party flowers herself.

(9) My husband and I bought our co-op apartment in a prewar building in the historic district of Jackson Heights in December 2016. Since then, we “opened it up” with renovations befitting a West Elm catalog. I turned the guest bedroom into a remote office. We over-tip delivery men for bringing us pad see ew and cemitas and lamb vindaloo.

(10) Ennui diluted in my glass of rosé, who has heard of such a thing?

(11) I coughed and I worried. I checked my forehead frequently. Tickle in my throat and it was spring: allergy season. Was having a rash a symptom? Nasal congestion? The cough persisted for a week, two. Wet not dry. My muscles ached. From sleeping too much, from lying down on the couch too long, sleepless till dawn, then up by 11am. Oatmeal, sometimes eggs for lunch.

(14) I love staring out of windows. It’s almost telescopic. Threshold and lens. Protective, removed yet bearing witness to the elements. Windows suspended in between two sides of history.

(15) Social media had prepared us for the pandemic by inculcating social distancing.

(18) A friend, an ophthalmologist, at Queens Hospital spied on the refrigerated morgue trucks parked near the public lot. There were bodies stacked on top of each other, she said.

(19) I am not to be scapegoated for the “Chinese flu,” nor the “kung flu,” with its European strain, spewed by a weak fascist with no capacity nor compassion to lead. 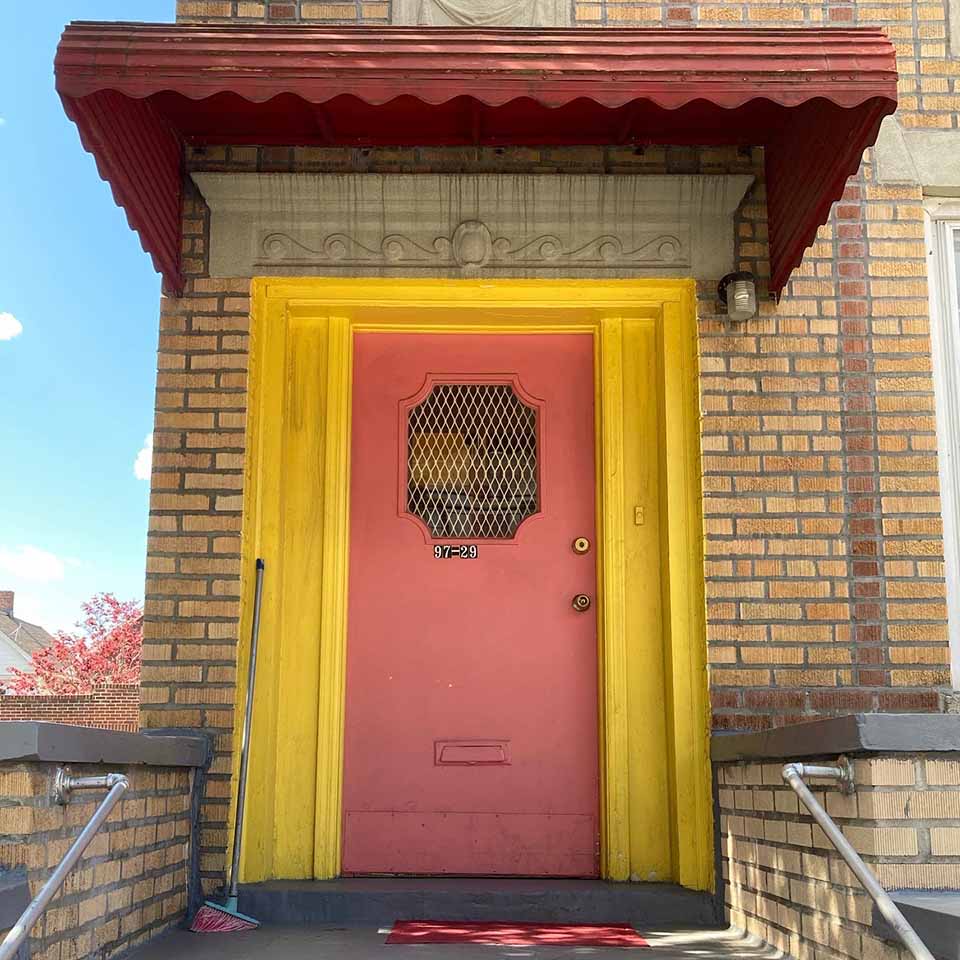 I am not to be scapegoated for the “Chinese flu,” nor the “kung flu,” with its European strain, spewed by a weak fascist with no capacity nor compassion to lead.

(20) Weekly, I Zoom with close friends. They share with David and me their son who is our godson, a real city kid who’s more than happy to stay indoors. For weeks we each curated a virtual mixtape of seven songs that fashioned a personal narrative. Here’s the group’s “7 Songs” playlist.

(21) “Where are you, world? / Window, portal. / Blank page before / me a sieve. / Does the lamp / flicker toward / a doorway? The door / leads to air, / emptiness. On the desk / a photograph. / My mother bronzed, / swelled in sepia, / whisper, the disappeared / in the here and now.” (Video Poem, Queensbound, Onassis Foundation, Queens Museum)

(22) Elmhurst Hospital is .6 miles from my home, about a few minutes’ walk. Ambulance sirens pierce all through the days and nights.

(23) Marlon, a friend, high school teacher, marathoner, fellow Filipino-American my age, was admitted to Elmhurst Hospital with Covid-19. For three days in the emergency room he was attached to a ventilator. When a bed finally opened up upstairs, he was moved to complete his recovery.

(24) During the pandemic, a walk is an awkward dance with strangers, equally afraid and cautious. The art drained from New York streets made for walking and strutting and sashaying. Trust is gone, no urgency but anxiety. We all have nowhere to go.

(26) Sourdough: no yeast, just starter. A perfect canteen of a bread.

(27) Through your mask I see you smiling.

(28) My mother calls from suburban California. “I’m bored,” she says. She doesn’t have Netflix or Hulu. She’s lost salary by not working. She is seventy-eight and deathly scared. She boasts taking vitamin C supplements. She won’t even go out in her yard. Her roses fend for themselves.

(29) I sheared off my long hair, electric razor buzzed like a lawnmower. I’m caterpillar eyebrows and sharp cheekbones. Who is that in the mirror? He is familiar so I assume we’ve met before.

(31) The plague has brought out the birds, riotous in the branches and air. The city has been transformed into a country. Flowers shimmer, and the azure sky sparkles.

(32) Every day at 7pm in the gloaming, clatter and holler and clapping like birds released out of the city balconies and windows.

(33) The Second Duino Elegy: “For it seems that everything’s / trying to hide us. Look the trees exist; the houses / we live in still stand where they were.”

(34) To be reminded of time I listen to Nina Simone’s recorded live concert rendition of “Who Knows Where the Time Goes?”

(35) Yet another killing of a black man has unleashed unrest and anger the pandemic cannot contain.

(37) The 1918 flu pandemic lasted for fifteen months, infecting 500 million people worldwide. It was caused by an H1N1 virus “with genes of avian origin.” Terrible angels!

(38) Please do not eat and blame the pangolin.

(40) David and I stumbled upon a Covid-19 testing site sprouted from a lot amid a shopping mall and car dealerships in Woodside, Queens. A kind South Asian health-care worker swabbed up the most inner recess—corona, if you will—of my nasal passages.

(41) There is a shortage of bicycles. So we leased a Kia Forte for three years, having never owned a car in the city. Restlessness is a disease.

(42) Being a writer, I thought I was built for isolation since inwardness was my cottage industry. Four walls and a low ceiling can trap a person. There is simply the present, inert. Yourself, staring.

(43) I realized what I’m carrying heavily is grief. Incalculable deaths. Yet no collective mourning. As humans, we need the ritual, to perform the rites. This pandemic is persistently lonely.

I realized what I’m carrying heavily is grief. Incalculable deaths. Yet no collective mourning.

(44) Pandemic is a grotesque child birthed by a monstrous society.

(45) During the heyday of the Holy Roman Empire, there were incidences of the dancing rage, or choreomania, a social phenomenon where groups of people, sometimes in the thousands, danced erratically until they collapsed in exhaustion. It was said to be the byproduct of the Black Plague, or long periods of isolation due to contagion.

(46) The Second Duino Elegy: “I know / why you so blissfully touch: because the caress persists, / because it does not vanish, the place that you / so tenderly cover . . .”

(48) The summer solstice was at 5:43pm edt, Saturday, in the northern hemisphere. The sun rose at its highest peak. The day showered with flagrant sunlight. 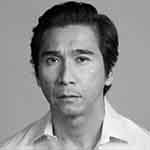 Joseph O. Legaspi is the author of the poetry collections Threshold and Imago (CavanKerry Press) and the chapbooks Postcards (Ghost Bird Press), Aviary, Bestiary (Organic Weapon Arts), and Subways (Thrush Press). He co-founded Kundiman and guest-edited the Philippine-American lit section in the March 2018 issue of WLT.