A Poem from Russia Samoylov as a soldier in the Red Army in the 1940s

Translator’s note: In June 1944 David Samoylov (1920–1990), an important Russian-language poet who was then a soldier in the Red Army, was sent to Ukraine to help suppress the nationalist insurgents fighting against both Nazi and Soviet occupation. The poem below, written in 1946, is, on the surface, a loyal Soviet soldier’s account of eliminating a hostile element—in this case, a woman who had ambushed and killed one of his comrades. Still, the reader cannot but admire the dignity of this “bandit,” a follower of Stepan Bandera (1909–1959) and Taras Bulba-Borovets (1908–1981). Writing in the 1980s, Samoylov recalled this period in his life: “It seemed self-evident that anyone who didn’t fight on the side of the Red Army, whatever their reasons may have been, was our enemy, abetting the fascists. That was also my point of view. Yet my poem ‘Bandit Woman,’ which was written after the war, shows that my feelings were always truer and more honest than my thoughts.” The poem reflects, in bold terms, the complexity of Russian-Ukrainian relations, then and now, as well as a commitment to understanding—or trying to understand—the other side of any conflict. – Boris Dralyuk

I led a bandit out, to shoot her.
She didn’t beg, she didn’t plead —
Just glared at me with pride and anger.
Her pain was bad. She clenched her teeth.

And then she said: “Now listen, fella,
You’re gonna shoot me anyway.
Before you lay me down forever,
Just let me look at my Ukraine.

Across Ukraine our horses gallop
Under the banner of Bandera.
Across Ukraine we’re stashing weapons,
Searching for a faith to honor.

Green moonshine boils in whitewashed huts
Around Berezne, in the woods —
We grin and press our sawed-off guns
Against the Russkies’ drunken heads.

Time for the Pechenegs to raid!
High time that Russian women sobbed!
There’ll be no more Ukrainian bread
For the damned Russkies and the Swabs!

Don’t want them gorging on our lard,
Drinking our vodka, getting merry!
Your scribes, however hard they try,
Cannot co-opt our nation’s story!

Bulba’s men ride across the fields,
Their bridles jangling loud, like coins!
Let Commies realize their ideals
The way they want to back at home . . .

It’s them that came up with the kolkhoz
Where any bum can eat for free.
For us Ukrainians, what’s the difference —
Gestapo or NKVD?”

And then I said: “Come on, you fiend,
It’s time you got what you deserved.
Wasn’t it you who killed my friend,
Who knifed him dead without a word?

The world is full of scum like you.
There aren’t enough like him around.
No sense in waiting for tribunals —
You’ll soon be rotting in the ground.”

And on we went. The land was brutal.
A bird was crying in the trees.
I led a bandit out, to shoot her.
She didn’t beg, she didn’t plead.

Translation from the Russian
By Boris Dralyuk 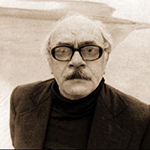 David Samoylov (1920–1990) was an important Russian-language poet who was a soldier in the Red Army and was a notable poet of the War generation of Russian poets. He has also translated literature from Estonian, Polish, Czech, Hungarian and other languages into Russian. 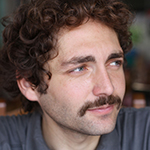 Boris Dralyuk is the executive editor of the Los Angeles Review of Books. He has translated and co-translated several volumes of poetry and prose from Russian, including Isaac Babel’s Red Cavalry (Pushkin Press, 2015) and Odessa Stories (Pushkin Press, 2016) as well as Mikhail Zoshchenko’s Sentimental Tales (forthcoming from Columbia University Press, 2018). He received first prize in the 2011 Compass translation competition and, with Irina Mashinski, first prize in the 2012 Brodsky/Spender translation competition. He is co-editor, with Robert Chandler and Irina Mashinski, of The Penguin Book of Russian Poetry (Penguin Classics, 2015) and the editor of 1917: Stories and Poems from the Russian Revolution (Pushkin Press, 2016).