A Dispatch from Dhaka 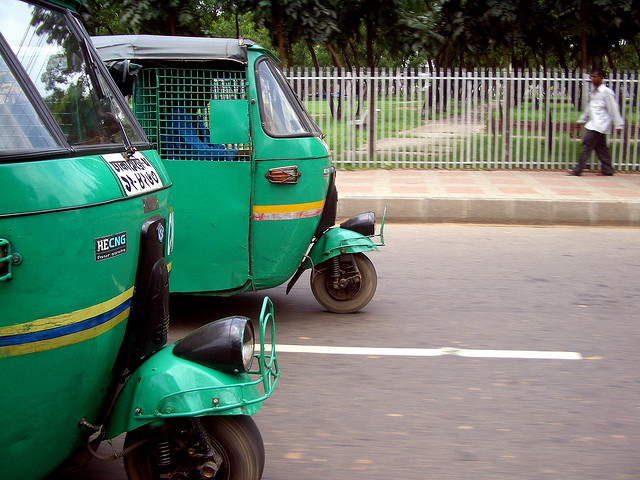 I’m in Dhaka, Bangladesh, for just the second time, almost exactly one year after my first visit, but things are eerily different. The drive from Dhaka International—which, in contrast, has stubbornly resisted the slightest evolution—is idyllic, which in Dhaka, the world’s most densely populated city, suggests the post-apocalyptic. The main thoroughfare leading into the city from the airport is almost deserted. A CNG—the ubiquitous three-wheeled motorcycle taxi converted to run on compressed natural gas—driver clutches his wheel with a death grip, cigarette wilting between his index and middle fingers: he’s never been able to drive anywhere this fast. It’s the thin silver lining of Hartal, an eighty-four-hour strike called by opposition party Jamaat-e-Islami, a countrywide protest punctuated by violence against those who fail to observe its shutdown. Today is the third day of Hartal, and the newspaper headlines are about the arson of a public bus, which severely injured ten passengers.

I’ve returned for a second year to the Dhaka Hay Festival, the Bangladeshi chapter of the international festival of literature and culture that first took root in the small town of Hay-on-Wye, Wales. Last year’s visit led to the special feature on Bangladeshi writing in the May–June 2013 issue of World Literature Today. This year’s visiting writers and thinkers include Eliot Weinberger, Tariq Ali, Mario Bellatin, and Tishani Doshi, with over seventy-five panel discussions and readings.

Does it matter? Does literature mean anything when buses are being burned in political protest and food supplies are running out because workers are on strike? I want to think so. I’m supposed to believe—and most of the time I do—that our literary activities mean something to the wider world, beyond being worthwhile in and of themselves. But I’m prone to skepticism, and Dhaka’s Hartal makes me doubt the importance of the writerly life. Not the importance of writing, but of its hallowed halls and somber audiences, its remove from the everyday.

I haven’t given up. I really do believe that featuring readings in all twelve of Bangladesh’s languages, not just the majority Bangla, will encourage listeners to humanize and respect each tongue’s speakers, that inaugurating the Dhaka Translation Centre is an important moment for the coexistence and mutual celebration of the country’s languages and cultures, that Eliot Weinberger might share some secret wisdom gleaned from the literary gods, and that the launch of new collections by subcontinental women will continue rectifying the gender imbalance that our literary systems have engendered. I hope to be a small part of that small bettering of our world.

In that way, Hay Dhaka is an experiment in literature’s mattering, in its helping make sense of the world. It’s not happening in spite of Hartal but because of it. Literature and life, Hay and Hartal—there’s not one without the other, and to pretend so is disingenuous, delusional, and potentially dangerous.

So I’m here, speeding through the empty streets of Dhaka, past the prime minister’s residence and the army barracks, past Louis I. Kahn’s Jatiyo Sangsad Bhaban and a gym that offers special hours for women to exercise. Mario Bellatin wants to buy a crow. There’s a special breed available only in Bangladesh, he claims. Crows that aren’t bravo, he explains. Sweet crows, like kittens, not at all like the aggressive variety we know in the Americas. No clawing, no pecking, no stealing shiny things. Good pets. We discuss the feasibility of taking one back to Mexico. It’s absurd, exciting, complicated. Petty, especially once I've seen the photos on the cover of today’s Tribune.

We don’t understand Hartal. We can’t. But here we are, in Dhaka, to share in the Bangladeshi experience and to share our own experience as best we can. I think that’s what this literature thing is all about—I hope it is.

Tagore in Dhanmondi from David Shook on Vimeo.

While visiting Dhaka for the Hay Festival, Shook also went for a walk through Dhanmondi with Mario Bellatin and Chris Heiser. He recorded this version of (“Over the green and yellow...”) based on Rabindranath Tagore's self-translation from the Bengali.