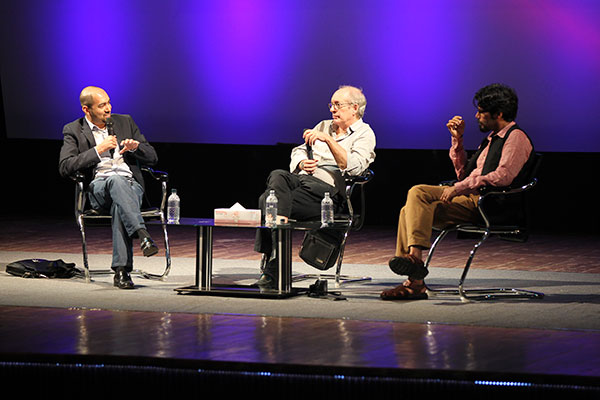 A foreignness defined only by place of production or setting is rather banal. World Literature should be defined by foreignness of form. A true expansion of form will make room for that infinitude of human experience that has been left out of literature.

For three days this November, the Bangla Academy in Dhaka came alive with the voices of writers from home and abroad. It was the third edition of the Hay Festival Dhaka, welcoming Tariq Ali, Ahdaf Soueif, and Nadeem Aslam, among a host of other international and Bangla writers. We gathered one morning by the Burdhwan House, one of the great treasures of colonial architecture, for the opening. In the front loomed a famous banyan tree that has shaded countless readings. In a far corner rose a stunning modern building next to an old, green pond. This charming mismatch of properties, coupled with all the elements of a Dhaka winter—soft sun and cool breeze, women wrapped in shawls—made a perfect setting for the first panel of the day: “Is There a World Literature?”

It was my privilege to moderate the opening panel and to have on hand two perfect stalwarts for that discussion: Eliot Weinberger and Pankaj Mishra. We decided to tackle the topic, for the sake of practicality, with a focus on the kind of works that have come to be recognized as World Literature since the 1960s. I started by asking my panelists what World Literature meant to them in their youth. For Pankaj, who had famously bought the entire set of New York Review of Books from his local library, there was no well-defined canon before him. Similarly with Eliot, who read whatever he came across and, being a New Yorker, that included works from many corners of the world.

Vans full of books came to our school and we grabbed whatever world classics—from Greek tragedies to Maxim Gorky—that happened to be on offer.

Growing up in Dhaka, my experience was a bit different. In the 1980s, a famous professor of Bangla started the World Literature Center (Bishsho Sahitya Kendra), which also ran a lending library. Vans full of books came to our school and we grabbed whatever world classics—from Greek tragedies to Maxim Gorky—that happened to be on offer. Thanks to the BSK and a richly arbitrary collection at home which dated from my grandfather’s time, my personal taste was strongly skewed to foreign authors, despite being a Bangla medium student. As a teenager I was lucky to be exposed to modern Bengali classics, while I chanced upon a range of foreign authors: Tolstoy to Asimov, Maupassant to Maugham, and Singer to Camus.

So many years later, sitting on the panel at Hay Dhaka, I raised a question that began to form during my haphazard but hungry adolescent readings: Beyond the obvious categorical imperatives set by the publishers and academe, what are the main determinants that help some works to travel across borders more easily than others? Is it form or content? Linguistic style and the putative translatability of a work, or the relative obscurity of its cultural idiom and references?

As one can imagine, there was no easy answer to these questions, except that the zeitgeist of the receiving culture can have a lot to do with a work and its fate. Thus a Milan Kundera or an Ismail Kadaré—both personal favorites—found a great audience in the West when equally worthy peers, say, a Danilo Kiš or a Sándor Márai did not. Despite the ways that geopolitics seeps into cultural inflections, we also agreed that neither cross-border circulation served as proof of quality, nor did a work’s obdurate rootedness deny its merits. The question of what inherent traits help a work travel was placed not as a judgment but simply to identify any formal markers of such works.

The other issue we raised, and one that haunts World Literature, even when it’s not explicitly raised, was that of tradition and authenticity. Are all postcolonial cultures at this point unavoidably embedded within a broader Western tradition? I placed this question first to Pankaj, as he has devoted his recent works to delineating an Asian tradition apart from the colonial impact. Pankaj said, “We can find a few novels here and there. . . . But primarily many of the societies did not have the novel. . . . It is only recently I think, last twenty years or so, that the novel has become dominant over other genres. The novel we know now is really a creation of the European bourgeoisie and adopted by the middle class. Russia first, then the Germans. . . . But people like García Márquez redefined the novel by taking it away from the stereotype.”

Milan Kundera has famously asserted a European patent on the novel. Even as the European precedence is given its due, Pankaj suggested that it is “novelists from outside the West who are responsible for the novel’s most attractive and bracing recent incarnations.” Eliot goes a bit further to insist that the novel is not only a Western invention. “Because there are Chinese novels in the seventeenth century,” he said, “alongside a spate of other examples, such as the Tale of the Genji.”

The issue gets more interesting if one looks at poetry. Pankaj pointed out that “poetry was the primary literary genre in countries like India and Egypt and Indonesia “ until quite recently. A phenomenon that might be quite beyond the range of imagination of Western readers or writers of more recent generations. Eliot added that in poetry “the boundaries between foreign and domestic are much less clear. . . . Modern American poetry, for example, is inextricable from its discovery and invention of classical Chinese poetry. Beginning in the 1910s and 1920s, there was a haiku mania in the US and in many European languages. So if, as an American, I write a haiku, am I influenced by the Japanese, or García Lorca, or Pound’s ‘In a Station of the Metro?’”

A diversity of influences is perhaps intrinsic to all literary forms—in all ages and all places. But since the 1990s, with the end of the Cold War and a globalism-on-steroids in motion, a certain kind of writing—about displaced people and disrupted places—came to be identified more and more as the core of a World Literature. A recent article in the magazine n+1 has rightly taken the more middlebrow versions of this form to task. That segment of global writing seems mainly about telling Western readers about how things are “over there” and/or how things are for folks from “there” in our midst, meaning in Western metropoles.

There is nothing wrong with either accounts of any given place—heavily disturbed or apparently placid—nor with displaced people, irrespective of origins or destinations. But n+1 takes exception to writing that feeds a comfortable Western multiculturalism and in the process becomes complicit in a process of muzzling literature’s potentially oppositional nature.

One recalls a time when certain aisles in UK supermarkets used to be labeled “Foreign Food.” For now, all writing from other places—irrespective of their nature—gets labeled as World Literature.

For all its progressive thrust though, the article shares a fundamental fallacy with the objects of its criticism: it defines World Literature—from its metropolitan vantage—foremost as writings from “elsewhere.” It then calls on this writing to adopt avant-garde stylistic techniques and an ethos of anti-imperial opposition. These are laudable aspirations, but it is not clear why this burden of worthiness should fall disproportionately on the Third World writer. Why should Western authors be exempt from the obligation to produce fiction that is international?

One recalls a time when certain aisles in UK supermarkets used to be labeled “Foreign Food.” For now, all writing from other places—irrespective of their nature—gets labeled as World Literature. Conversely, critics in other places too tend to view World Literature as something apart from their national literature. Our panel seemed to be straining, however, toward a notion that it is not locale but form that better indicates what is World Literature.

A great deal of Western writing has enjoyed global circulation—thanks to their status as voices from imperial centers—without actually being international in any sense. And a complementary advantage is now being enjoyed by certain types of “foreign” and especially “ethnic” writing.

A foreignness defined only by place of production or setting is rather banal. World Literature should be defined by foreignness of form. In this sense, formal alienation ought also to mean something more than deviations from realism or metatextual calisthenics. A true expansion of form will make room for that infinitude of human experience that has been left out of literature.

Formal breakthroughs in this respect will encompasses not only the so-called subaltern experience, but also throw familiar social terrains into entirely new relief. This is what made, say, a V. S. Naipaul once so urgent. In the works from Miguel Street to A Bend in the River, he went beyond mere reportage to renovate the house of literature for inhabitants who had never entered it before. So too did Salman Rushdie in Midnight’s Children (the nonrealist pyrotechnics of that book may come to be viewed as its less interesting aspect in time).

As we concluded the session, a comment of Eliot’s summed up the conundrums of influence best: “Latin American poetry was enormously influential on US poetry in the 1960s. Beginning in the 1990s, there was a generation of Latin American poets enamored with the US poets who had begun in the 1960s. It’s like a Sufi parable: one travels far to discover what was at home all along.”

We are already part of one another. Literature—be it World or otherwise, as long as it is true—is about the thrilling uncertainty of journeys and unexpected jolts of recognition.

Editorial note: For more on the festival, read David Shook’s “Dispatch from Dhaka.” 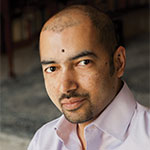 K. Anis Ahmed is the author of Good Night, Mr. Kissinger and The World in My Hands (WLT, May 2013, 49–52). He is also the publisher of the Dhaka Tribune and a co-director of the Dhaka Lit Fest.