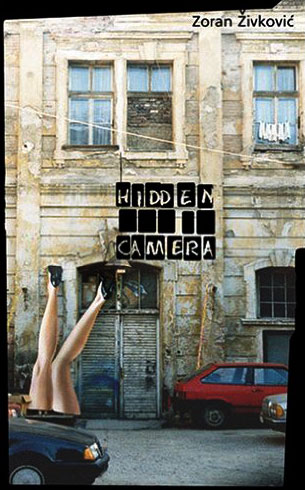 Zoran Živković’s Hidden Camera (translated by Alice Copple-Tošić) unfolds within that indefinite space between dream and reality. Upon receiving a mysterious film-screening invitation wedged in his apartment door, a simple undertaker finds himself cast as the main protagonist in what he assumes to be a candid-camera television show. An engaging story with curiosity around every corner, the book sends the undertaker on a quest to discover what’s at the end of this show (which he assumes is filming at each appointed destination he’s given). The production seems to employ just two actors and an actress to perform in each scene that’s cleverly orchestrated in a journey across the nondescript town.

While selecting a soundtrack to pair with this novel, I was often drawn to songs with repetitive melodies or rhythms. The repetition seems to parrot the book in two ways: it matches the narrator’s obsessive thought patterns, and alternatively it also mimics the soothing and ever-changing patterns of the fish swimming in the undertaker’s fish tank. He goes into detail about how watching the fish gives him tranquility. Many of the songs I’ve selected allude to a similar comfort in patterns, including those satisfying moments of expectantly waiting for the patterns to change into something new and interesting.

As mentioned, the undertaker explains the odd comfort he feels from observing the fish in his fish tank. A bit deeper into the book, it starts to seem like it’s the undertaker who is in the tank—it appears that someone is always observing his seemingly erratic behavior. The chorus in Björk’s “Human Behaviour” equates the sensation:

If you ever get close to a human
And human behavior
Be ready, be ready to get confused

The song (as well as its music video directed by Michel Gondry) gives the sensation of viewing humans from an animal’s point of view. The effect is synchronous with the reader’s point of view in Hidden Camera—we’re positioned as spectators to curiously observe the undertaker and wonder what he will do next.

This extended, instrumental version of “Stupid Things” by Yo La Tengo paints a variety of melodies over an entrancingly repetitive, electronic beat. Živković’s book—with its very minimal dialogue—fits well with this song as it seems to reflect the effect of having very little dialogue. The instrumental piece is twelve minutes long, and it seems certain the narrator could easily walk the entire length of this song and not have a single human interact with him in the strange, empty city.

Post-punk music is distinctive in its use of extensive repetition, and this song by British band Magazine is no exception. The way the guitar loops the same melodic theme reminds me of how the undertaker loops various hidden-camera scene situations in his head, playing out each possibility before he carefully takes an action. This song particularly reminds me of when the undertaker is choosing his actions in “scene two” at the used bookstore. With only a notification that the store will be closing in an hour, he finds himself walking cautiously through the aisles and meticulously thinking through what the supposed camera crew wants him to do. The lyrics “The conspiracy of silence ought / To revolutionize my thought” sum up perfectly what he hopes to achieve in all his ruminations in the quiet, deserted bookstore. It’s entertaining to watch him overcompensate his actions in an effort to maintain a level of dignity that he thinks a television audience won’t find too laughable or pathetic.

José González’s “Vissel” is another instrumental piece that seems to pair well with the novel. The simple melody that’s whistled and played on guitar reverberates with ruminating patterns to create an altogether pleasant melody. The music seems to echo gently into an empty space, and it creates an airy, dreamlike lightness that matches the relief the undertaker feels when each presumed hidden-camera scene ends.

In a quest to make it to one of the hidden camera scenes, the undertaker catches a ride with a stranger, and on the ride he notices music coming faintly from the car’s speakers.

“I couldn’t understand why the man didn’t turn up the sound or turn off the music. This way you could only listen if you strained your ears. I had to make a real effort in order to finally ascertain that it was a composition for piano and flute. A woman’s voice appeared from time to time, but the singing was more or less inaudible.”

This song resurfaces when the undertaker finds himself alone outside the monkey cage at the zoo. A pianist, flautist, and vocalist begin performing the same song in full bravado. I imagine that the jovial nature of “La Capinera” could successfully inspire that moment in the book where the protagonist erupts with enthusiastic applause.

“Anita” features a lone piano played by Cuban pianist Francisco Emilio Flynn. This particular recording isn’t grandiose, and as such it fits well with the simple undertaker. The effortlessness of a simple melody on piano fits well with his solitary life.

With such lyrics as “I wouldn’t worry / Your melodramas are embarrassing,” and “Imagine menace under everything,” the song keys in on some of the undertaker’s obsessive apprehensions throughout the book. In spite of those worries, he still curiously thrusts himself into the trust of the hidden-camera performers who help him through each scene with a distant balance of kindness and cruelty. If the performers communicated with him more, they might have cryptically spoken these lyrics: “Well the best is yet to come / Love, the enemy.”

A sweeping eeriness in this song matches well with the overall tone of Živković’s story. In the background the keyboard carries a steady, repetitive melody, and the lyrics “I don’t care too much for this sentiment” fit so well with the undertaker’s overall disposition. The chorus echoes, “We can find an easy way out” and resonates with the protagonist’s thirst to find his way to the end of this production that depends on his participation.

And finally, as a counterpoint to the jovial flute, piano, and vocalist piece from before, this flute and piano duet is more somber and pairs with the dark and dream-like setting of the novel very fittingly.