Book Review: Words without Borders: The Best of the First Ten Years 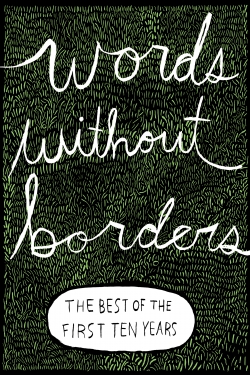 “Perhaps this approach to discussing the art of translation is not very different from the tradition of midrash, where the holy book is revisited again and again, so the years bring only more richness and variety. By admitting that no poem can truly be translated, but that a new poetics can flow from the originals, a literary tradition is established in that midrash-like handshake between the author of the original and her translators.” – Ilya Kaminsky, “Correspondences in the Air”

Has anyone ever made you a mixtape? I remember receiving a few from friends in high school and college, and I recall the delight in hooking the headphones to my cassette or CD player, cranking up the volume, and devouring the handpicked tunes with total focus and devotion. There’s a deeper intimacy not only between the listener and each song/artist but also between the listener and friend. And with that first listen each song is a pleasing discovery.

In the same way, the recently released ebook Words without Borders: The Best of the First Ten Years provides that same sense of discovery—it’s an eclectic collection of international authors and, thus, a broad variety of short stories and poetry. In a single collection, readers encounter poetry from Argentina, Japan, Poland, and Slovenia and stories ranging from gritty wars and exile to comedy and evangelism. Transitioning from story to story can often be jarring—like a mixtape jumping from Tchaikovsky to Tupac—but it’s also pleasing to cover so much ground in regard to genre and style. And much like the post-mixtape experience, the anthology had me adding authors to that ever-growing “to-read” list.

Every contribution in this anthology is a translation, and Words without Borders includes two excellent, thoughtful essays—by Ilya Kaminsky and Lawrence Venuti—that celebrate the art and ruminate on the process of translation. The translators occupy a proper pedestal in this collection, and the essays increase the reader’s appreciation for the translators’ careful work.

For example, in Venuti’s essay titled “How to Read a Translation,” he lays down five rules for reading translations. In the third, he elaborates, “We should view the translator as a special kind of writer, possessing not an originality that competes against the foreign author’s, but rather an art of mimicry, aided by a stylistic repertoire that taps into the literary resources of the translating language.” For me, delving into Venuti’s five rules amplified the pleasure in reading this collection. Following are just a few of the stories that particularly lingered with me long after reading them.

“Eagles,” by Kader Abdolah and translated by Peter Constantine, is immediately grasping with a vivid sense of place among the mountains. A boy and his father are traveling and searching for a place to properly bury his brother, and the tension and grief propel the story forward in a gripping manner. When the boy comes to understand the purposeful urgency in his father’s quest, it’s a relief to feel the contention between them dissipate and watch the story unfold.

“Easter Lunch,” by Gabriella Ghermandi and translated from the Italian by Brenda Porster, was a riveting journey of comedy and tribulation as a young girl toils for her grandmother to approve of her “white boyfriend.” It’s an adolescent trial that’s probably familiar to many, but Ghermandi’s story is so refreshingly entertaining as the collision of Ethiopian and Italian culture underline this child’s unique coming-of-age experience within a family where “to belong, you had to have the soul of a nomad.”

Another riveting standout was a work of science fiction by Marek Huberath titled “Yoo Retoont, Sneogg. Ay Noo.” Translated from the Polish by Michael Kandel, the piece is one of the longest in the collection and also one of the most engaging. The world within this futuristic story unwraps like a mystery, and it’s deeply character-driven—it’s hard not to feel compassion for the characters Piecky, Snorg, and Tib. The outcome is a fine tale of loyalty and heroism in a bizarrely fascinating, post-apocalyptic world.

Seasoned World Literature Today readers will find many familiar writers and translators in the collection as well: Alison Anderson, Carmen Boullosa, Peter Constantine, Gabriella Ghermandi, Ilya Kaminsky, and Abdellah Taïa grace the pages, just to name a few. Ultimately, this “mixtape” is for readers looking to broaden their literary horizons.