A New “Murmuration” Among Translators: The Starling Bureau 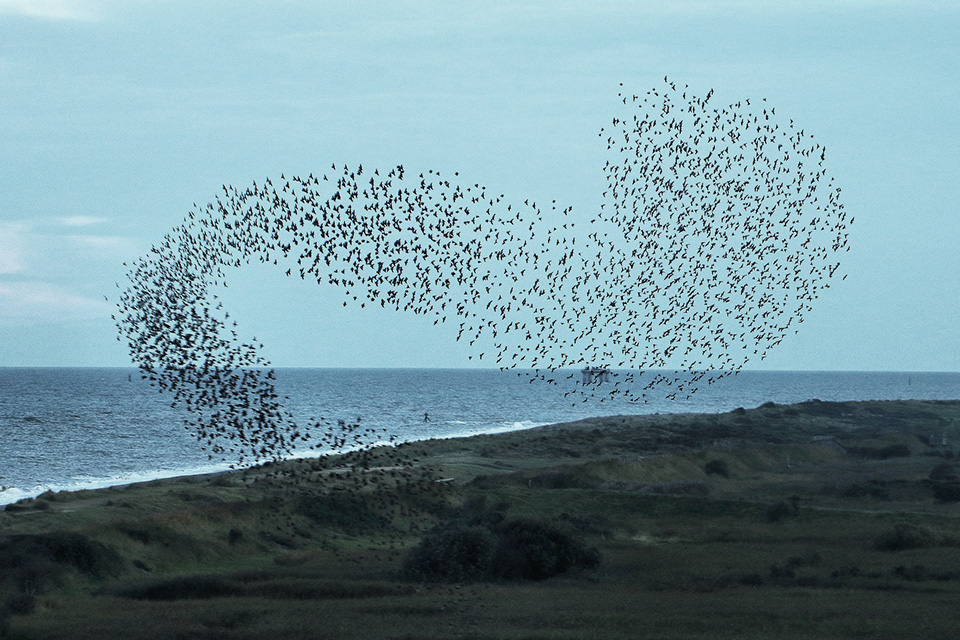 In this interview, Roland Glasser shares how the collective formed, what they are doing to transform the process of pitching books to publishers, and how their collective ties into the ongoing conversation about improving translators’ rights.

Jen Rickard Blair: How was the idea for the Starling Bureau born? Do you recall a single moment when the idea sparked, or was it perhaps a more gradual evolution?

Roland Glasser: The idea of forming some kind of “literary translators’ agency”—which would perform a similar role to an author’s agency—is one that translators have been mulling over for years. After all, such agencies exist for most other creative professions, such as illustrators, actors, musicians, and designers. But it’s a rather tough nut to crack for literary translators, mainly because there simply isn’t enough money in literary translation to make such a venture financially sustainable.

This is why there has been increasing talk of a “collective” model, a more formal and focused way of doing what so many of us do already, but which does not necessarily need to make any money (beyond the individual book contracts each member might sign) in order to be beneficial to its members. Zoë Perry and I were at the ALTA conference in Oakland in October 2016, where a bunch of our New York-based colleagues announced that they had set up just such a collective (Cedilla & Co.). Zoë and I looked at each other there and then and made a pact to set up our own collective as soon as we got back to London. We joined forces with three other close colleagues, people we knew we could work with, who were also London-based, and translated from different languages, and The Starling Bureau was born.

BLAIR: Great ideas often arise when thinking about a particular problem—is there a specific challenge in the literary translation and/or publishing world that you and your colleagues had in mind when forming this collective?

GLASSER: Literary translation is, by its nature, an isolated profession. We each build our own networks of contacts with publishers and agents. Conversely, when a publisher is looking for a translator, they will either work with people they know already, or else they will ask those people to recommend someone. All of us therefore have to expend a lot of time and energy on promoting ourselves. Finding and pitching great books to publishers is a key part of both self-promotion and finding work. But this effectively requires us to work as literary scouts, yet without the retainers or commissions that a literary scout would receive. And it also takes a lot of time and effort to pitch a book properly—each title might well be pitched to half a dozen publishers (or more), with a number of follow-ups, reminders, and nudges needed just to get them to consider it. . . .

Yet the literary translation community is generally very supportive. We help and advise each other and pass on contacts and tip-offs. For example, the word might go round that publisher X is looking for this or that kind of title; or translator A might ask translator B to look over their book pitch or their sample before submission, or ask translator C to look over a draft contract they’ve received. We come together through formal organizations such as the UK Translators Association (equivalent of ALTA in the US), or more informal setups, but nobody has much more than a friendly interest in their colleagues’ success or career development.

But by working as a small collective, The Starling Bureau can leverage all of the skills, experience, and contacts of its members in a much more structured and focused way, making us both more efficient and more effective.

BLAIR: And how did you and your fellow translators in the collective meet?

GLASSER: The five of us first met in 2012, at a week-long Literary Translation Summer School run by the British Centre for Literary Translation in partnership with Writers’ Centre Norwich. In the years since then, we have come to know each other better through being active on the London translation scene, and by our involvement with organizations such as the Translators Association, the Emerging Translators’ Network, and the European Literature Network. The fact that we were all friends certainly made it easier to get the collective rolling. We all have quite strong personalities—which provides a useful creative friction—but we’re very supportive of each other. It’s a good balance. 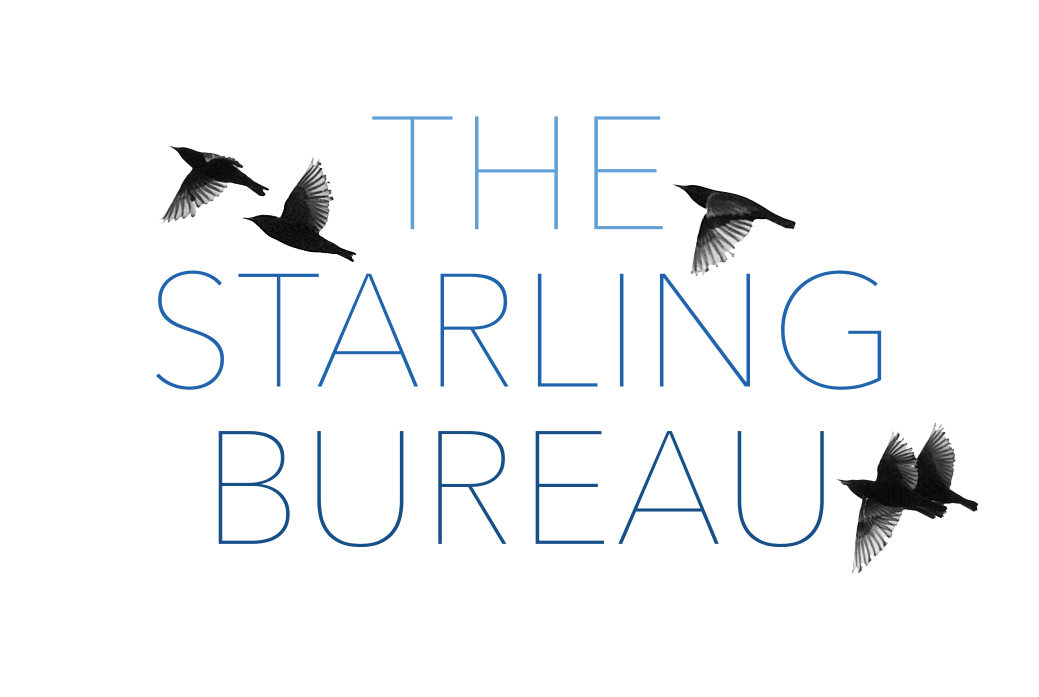 BLAIR: Why a starling? Does this bird have a special symbolism?

GLASSER: We wanted our name and logo to say something about what we do, how we do it, and where we’re based, yet without being too explicit. Birds are age-old symbols of communication and transmission—a cliché perhaps, but sometimes a cliché is precisely what you need! Starlings are able to move in such impressively huge and maneuverable groups because each bird in a starling flock (or “murmuration”) is in close communication with up to seven of its neighbors—a notion that fits our collective perfectly. And the starling is one of the three most common bird species in London—our base. A starling’s plumage is also a beautiful range of intricate, inky shades—which in close-up evokes some of the inside-cover designs found in antiquarian books—a feature we thought might prove interesting for future branding.

Starlings are able to move in such impressively huge and maneuverable groups because each bird in a starling flock (or “murmuration”) is in close communication with up to seven of its neighbors—a notion that fits our collective perfectly.

BLAIR: It’s easy to focus on only the most obvious aspects of a translator’s work—that of translating a work of literature into another language. Do you think the collective can also serve a broader role of communicating the other important roles a translator plays in the entire process of publishing translated books?

GLASSER: Yes, of course. A collective can become a “go-to” point for publishers seeking information about a particular author or book or funding and promotional opportunities for particular languages. Members of a collective would usually have good contacts with people working with languages not covered by the collective, so they can point a publisher in the direction of a reliable colleague. And we should not forget relations with the source-language publishers and agents. Being part of a collective, having a “brand,” can make it easier to conduct that other essential aspect of our business, namely finding books with good potential for translation, checking the availability of rights, and so on.

There are also many more translation-related events these days, some of which are aimed squarely at the general public (festivals, readings, etc.) and others more at members of the profession (industry days, workshops, etc.). The Starling Bureau has already been approached several times by event organizers seeking a speaker or panel participant, and we have been very happy to provide someone.

We also hope that our growing position in the translation ecosphere will provide yet another platform to talk about and improve translators’ rights—and by extension authors’ rights in general.

Lastly, while there have been some improvements over the last few years regarding the contractual terms offered to translators, there is still a lot more progress to be made. As a collective, we can take a more robust position in contract negotiations, thanks in part to being able to consult with each other, but also by establishing a common policy on certain points. And we also hope that our growing position in the translation ecosphere will provide yet another platform to talk about and improve translators’ rights—and by extension authors’ rights in general.

BLAIR: Publishers Weekly identified just two other translator collectives: Paper Republic, which focuses on Chinese literature, and another, relatively young one established in October 2016 called Cedilla & Co. Do you think the Starling Bureau might help catalyze a change in how translators establish their role in the publishing world?

GLASSER: Definitely. After all, The Starling Bureau would not exist (or at least not yet) if it weren’t for Cedilla & Co. inspiring us! And there are as many ways to make a collective as there are ways to translate a book! Paper Republic is a single-language model, while Cedilla and Starling are both multilanguage, and I have heard murmurings of plans to set up a collective for Slavic languages. One might also imagine collectives forming with the aim of focusing on art books, say, or crime, or children’s/YA, or another genre. As I said before, there are many informal structures which exist already, but formalizing a structure, feeling responsible for (and responsible to) others, sharpens your focus and forces you to think concretely about all those aims and ideas that are so easy to fling around over a beer or two but much harder to realize when you find yourself back home, alone.

BLAIR: You recently translated Fiston Mwanza Mujila’s Tram 83 from French to English for Deep Vellum. Do you always feel a strong certainty when you know you’ve found someone who needs to be translated, or does the process sometimes require more speculation and research?

GLASSER: It almost always requires some speculation and research, because as much as you might love a book, or feel that it would be exciting and fulfilling to translate, it might simply not be suited to your target market. Perhaps the themes and subject matter are very specific to the source culture, or maybe there is an excess of similar material already published in English. Perhaps the book is exceedingly long and funding short. Or maybe, as much as you enjoyed the book, it’s just not quite good enough. Saddest of all are the books that really have something amazing about them, but are just way too long or badly structured, too verbose, too lacking in plot and complexity or character development. There are of course occasions where you realize that some judicious editing on your and the publisher’s part could (with the author’s permission) turn a book into a real jewel, but sometimes the road is just too steep, and you must, reluctantly, set aside the title and move on.

Again, this is where a collective is very useful. In The Starling Bureau, every book that one of us wants to pitch to publishers must first be pitched to the rest of the collective. And then, once the title has been accepted by all, the collective will work to hone that pitch (and accompanying translation sample) in order to present the book not only in the best light but also to include all of the information the publisher would want, from a synopsis to sales figures.

BLAIR: Which other French-language authors do you think presently need to be translated into English?

GLASSER: That’s always a really tricky question, partly because it’s so subjective. So I would rather not answer. But I can assure you that any readers and publishers who visit our website over the coming months and years will find much to entice them. . . . 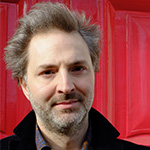 Roland Glasser translates from French to English, and his translation of Fiston Mwanza Mujila’s Tram 83 won the Etisalat Prize for Literature 2016 and was longlisted for the Man Booker International Prize and the Best Translated Book Award. He has translated a wide variety of authors, including Anne Cuneo, Martin Page, Marc Pouyet, Ludovic Flamant, Robert Morcet, and Clémentine Beauvais. Glasser has contributed articles and essays to The White Review, Asymptote, Lit Hub, Chimurenga, In Other Words, and the Fitzrovia and Bloomsbury journals.­