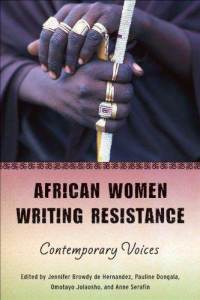 African Women Writing Resistance is a compelling and satisfying anthology. It goes beyond presentation of the challenges facing modern African women to feature the ways in which women overcome adversities, how they discern the root causes, and how women engage these challenges on a personal level. The contributors to this anthology know how to tell a good story and are aware that their stories are essential to resistance. As the letter writer in "Letter to My Cousin" reports, "My personal ethos is that there are some truths that people need to be told." The form the individual women take to effect resistance does not always result in a positive effect, yet the goal of resistance is constant throughout the works: freedom and autonomy.

Touted as "the first transnational anthology to focus on women's strategies of resistance . . . in Africa today," the anthology never disappoints. It includes short fiction, nonfictional prose, testimonials, poetry, interviews, a performance piece, and a roundtable discussion. The selections recall and enlarge upon ideas proposed by the mothers of African literature: Bessie Head, Ama Ata Aidoo, and Buchi Emecheta, to name a few. Skillfully divided into seven sections, the anthology invites wonder, exploration, and dialogue. From the first part, "Engaging with Tradition," to the final part of the work, "Standing at the Edge of Time: African Women's Visions of the Past, Present, and Future," the anthology focuses on how tradition supports the oppression of women ("Interview with Elisabeth Bouanga"), how AIDS disrupts the family unit ("Slow Poison"), how so-called revolutionary moments are unable to sustain the promise of women's freedom ("The Good Woman"), and how the practice of polygamy paradoxically empowers and oppresses women ("The Battle of the Words").

The anthology is also comprehensive, featuring in-depth and humanizing information on interethnic conflict, the oppression of lesbians, rape as a tool of war, female genital cutting and mutilation, incest, religion, modern rituals, and the intervention of foreign influences. The interviews "Interview with Kaya a Mbaya" and "To Be or Not to Be a Lesbian" alone are especially insightful and compelling. The poetry of Ann Kitaka is mesmerizing. Nawal el Saadawi's "The Struggle to End the Practice of Female Genital Mutilation" clearly extends the implications of the phenomenon beyond of Islamic province. The editors assert that they are endeavoring "to raise awareness about the issues" through the anthology and "to promote an open-ended discussion about conditions for women in different regions of Africa." As a bonus, the work invites comparison of the condition of women globally.

In the richly complicated selection "Lovesung for a Father," poet Zindzi Bedu offers a perspective on the universal nature of patriarchy: "Sexual abuse is not just a legacy of slavery. What is outrageous is the silence and shame." Like other contributors to the anthology, she invites comparisons with both continental and diaspora writers who suggest that challenges facing women are the continuing legacy of the patriarchy. Maternal silence, yet another tool of the patriarchy, invites comparison with Zora Neale Hurston, Jamaica Kincaid, and Nawal El Saadawi.

The crowning achievement of this anthology is its ability to motivate the reader to learn more about the rituals, practices, and lives of modern Africans. Thus, it presents a view of the anthology as dynamic rather than a static rendering of what was. The final selection, "We Are Our Grandmothers' Dreams," invites dialogue as the editors proclaim that they are "awaiting the responses of our sisters and brothers in the ongoing struggle to envision and bring about a world in which all of us . . . can go beyond resistance."