Say Her Name by Francisco Goldman 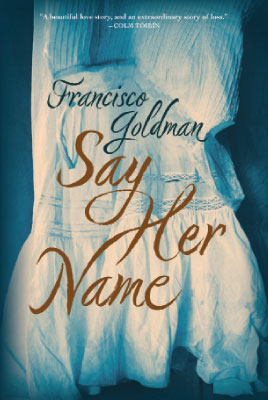 In July 2007 Aura Estrada, a promising Mexican writer studying in New York, sustained fatal neck injuries from bodysurfing off the Pacific coast of Mexico. She died soon after, leaving her husband, Francisco Goldman, to mourn. He immerses himself in all things sorrowful: from grief literature to alcohol, from destructive rebound relationships with Belle and Sebastian.

Rummaging through Estrada's remnants, Goldman pieces together his wife's life in order to better understand her. What results is Say Her Name, an unflinching and heartbreaking autobiographical novel that ruminates on some heady themes: grief and mourning, love and loyalty.

Near the beginning of the novel, Goldman recalls a trip the two took to Paris. Because Estrada was such a fan of Julio Cortázar's "Axolotl," they visited the Jardin des Plantes, hoping to see the creatures mentioned in the story. In the tale, the narrator obsesses over axolotls until midway through he becomes one of the animals. The story loosely serves as a model for the novel: Goldman obsesses over his late wife, in the process recreating Estrada from the fragments she left behind.

Goldman's narrative reach covers Estrada as a precocious little girl taking ballet classes in Mexico City, all the way through her teenage years, when she's taken to writing angst-ridden diary entries like this: "I'm a total pendeja of a girl. I never pay attention to anything and I'm fed up with myself, I hate myself. I want somebody I can tell all this to, somebody to hug, a lot and very tightly. But I look around, and I find no one." With her stepfather's career demanding that he travel for most of the year, Estrada becomes close to her mother. As she grows older, Estrada becomes torn between wanting to please her mother by becoming an academic and wanting to please herself and become a writer.

Though some reviewers have compared Say Her Name to Joan Didion's The Year of Magical Thinking and Joyce Carol Oates's A Widow's Story, a most-fitting analogue is Leonard Michaels's Sylvia. Both are based on autobiographical events, but instead of sticking to the factual restraints of memoir they employ narrative techniques found in fiction. There's a "narrative neatness" found in Say Her Name, as when Goldman, wanting to find some meaning behind Estrada's death, finds his wife's last story: "There were two open documents, the latest version of her story about the schoolteacher, and something new, probably the start of yet another short story, titled "'¿Hay señales en la vida?'" or "'Does life give us signs?'"

Goldman comes away from writing this novel with an understanding that though his wife's death was random and meaningless, her life wasn't: "Hold her tight, if you have her; hold her tight, I thought, that's my advice to all the living. Breathe her in, put your nose in her hair, breathe her in deeply. Say her name. It will always be her name. Not even death can steal it. Same alive as dead, always. Aura Estrada."