Was davor geschah by Martin Mosebach 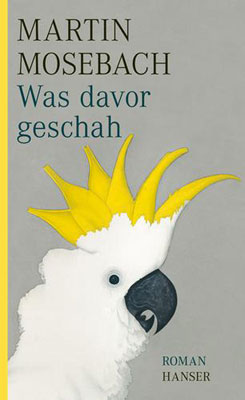 The title of Was davor geschah refers to the narrator's response to his new girlfriend's question, "What went on before I came along?" The question leads him to describe the little society he'd fallen in with upon moving to Frankfurt, in banking of course. This is the select group the Hopsten family entertains at its palatial villa in the Taunus foothills. The narrator has become acquainted with son Titus Hopsten, and he is thus brought into this circle and becomes infatuated with Titus's sister Phoebe.

Martin Mosebach is quick to demonstrate just how reliable a narrator we (and the girlfriend) are dealing with. On the train to the Taunus he sits across from a couple of women, both in jeans and t-shirts, one rather old and slovenly, the other young and ethereal. He wishes he could spend his weekend with this young "proletarian" instead of hobnobbing with the pretentious bankers. The young woman turns out to be Phoebe. And so the confabulations proceed. Often compared with Thomas Mann, Mosebach is an ingenious storyteller, using language magisterially across all registers, from the highly precise to the nicely salacious.

The parents—Rosemarie, whose one-piece bathing suit shows her Maillol-figure to particular advantage, and Bernward, who is slightly wooden but ever the gentleman—are the perfect couple. The frequent guest of honor is a retired, long-serving government minister, a regal figure whose son is a "mere paperback edition" of him—though he has managed to marry the languorously enticing German-Brazilian Silvi (whose wineglass host Bernward keeps unfailingly topped up). Another regular is Rosemarie's best friend, Helga, a designer who has done all the decorating of this villa, including its centerpiece. Rosemarie had wanted something "precious and lively" that moved without having to be wound up. This is the cockatoo in his pagoda-like cage in the center of the "salon." (If this were a novella, this would be its falcon.)

Needless to say, over the course of the narrative, practically the whole constellation of relationships shifts. It all starts when Joseph Salam, an "oriental" (a Lebanese-Austrian) joins the group, whom Mosebach uses to mock multicultural correctness. Salam plays his exotic role well, so totally overwhelming Rosemarie with his manliness that she plunges into an instant affair with him. This coincidentally throws Bernward and Silvi together. And so it goes. The grand villa is put up for sale—the cockatoo winds up on eBay. Phoebe finally calls the narrator, but before he can follow up, Helga comes by his building with another young woman who invites him to join them at the restaurant they're heading to.

This is the young woman the narrator is telling these stories to, but I won't give away her identity. It would take away from the plot trajectories that are every bit as baroque as the language is acrobatic. In Was davor geschah, Martin Mosebach offers a glittering wealth of intellectual as well as sensual pleasure: social satire at its best.