A Brief Conversation with Laleh Khadivi 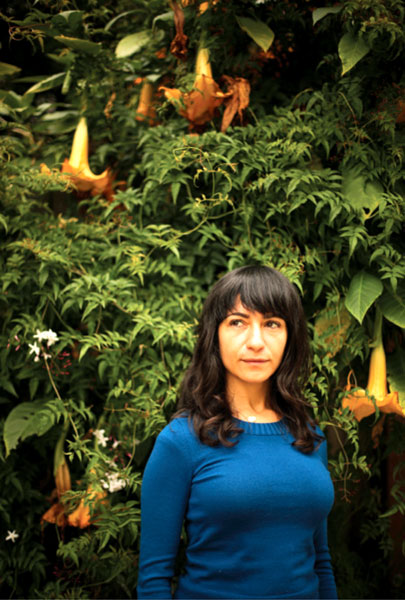 WLT: What recent book has captured your interest?

Laleh Khadivi: W. G. Sebald and Roberto Bolaño call to me again and again. Their work dissolves the membrane between the events of history and the emotional core of our modern lives. They seem to converse with me, from their thoughts to the page to my ear. This relaxed narrative form, at once personal and constructed, opens the doors of time such that at one moment we are together in the present of the story and also behind that present moment, with all the history and circumstance and drama that made the moment. They strike me as incredibly intuitive writers able to honor both the story they want to write as well as the story that wants to be written. In the case of Rings of Saturn or Austerlitz or Last Evenings on Earth, an entire history of violence courses behind mundane episodes of life. Violence is so often depicted in literature somewhere at the extremes of a spectrum that ranges from blunt to hysterical, and Bolaño and Sebald build books like houses, structuring an edifice of window frames and doorknobs all in service to the ghosts that will eventually wander the halls when no one is home. Their works have, over the years, enchanted and terrorized me, and they continue to echo in my work like all insistent inspiration, in waves loud and soft.

WLT: What outside of literature has recently captured your attention?

Laleh Khadivi:  Too much. Global sociopolitical instability. Climate change. The precise control of Alfred Hitchcock’s vision. Hummingbirds. New albums by P. J. Harvey and Björk. Everything by Leadbelly. TheKreutzer Sonata. Nonverbal commu­nication. The expansive control of Terrance Malick’s vision. Lina Wertmüller. Human migration in the twenty-first century. Postnational identities in the twenty-first century. Fluidity versus discipline. The obsession with longevity and youth. Silence versus sound. The constant truth that behind every face lies a universe of stories.

WLT: Does Iranian and Iranian American literature do the cultural work of humanizing Iranians to Western readers, providing a necessary counter to the Western media’s negative portrayal?

Laleh Khadivi: Yes and no. I don’t think it is the job of literature to do the cultural work of humanizing Iranians to Western readers. The media is a beast far beyond our control, and the only thing that can counter it is civil discourse, openhearted curiosity about the lives of others, and maybe a good pair of earphones and a TV/computer-free house in the woods. When America was in the midst of a cold war with Russia, books (Solzhenitsyen, Nabokov, Pasternak) did some of the work of opening a door onto a culture and a people, but that was only secondary to the immense draw of their stories. What those texts mostly did was reinforce the already-established American notions of Soviet life and communism and “them.” And even if literature did do such “humanizing” work, it would be up to the publishing houses to decide who and when and how much. I am afraid that much of the Iranian and Iranian American literature that publishers are willing to put out does the same. Much work has not been translated into English (Shahriar Mandanipour’s short stories for example), and so Iranian literature remains largely unavailable. As to the Iranian American literature, I am curious to see how brave the New York publishing houses are willing to be when they are faced with narratives that take on the unending complexity of exile and identity that offer no clean or comfortable endings and leave the readers with more questions than answers. As a writer who belongs more to Edward Said’s exilic consciousness than to any one particular country, I would like to think that literature is appealing because it rises above nationality and nationalism and draws people to places where they can suspend judgment, assumption, and belief. Each day, as I sit to write, I try my best to quiet whatever voices are generally expected of me—expat or refugee or immigrant—and aim to listen instead to the deeper noise that binds me all the way back to Scheherazade, who made a universe of stories that not only humanized her in the eyes of the raging sultan, but also saved her life.

A novelist and filmmaker, Laleh Khadivi was born in Iran and emigrated to the United States after the Iranian Revolution. The Age of Orphans, her debut novel and the first in a trilogy, follows the lives of three generations of Kurdish men as they grapple with landlessness, migration, and national identity. She is a recipient of the Whiting Writers’ Award and several fellowships.