"A Case of Time-Release Insight: The 2011 NSK Prize Lecture" 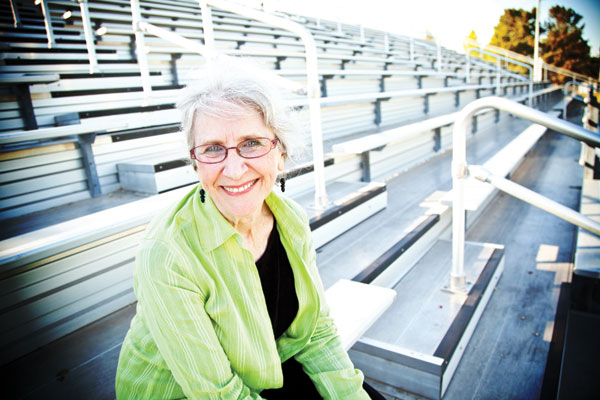 When she received the NSK Prize at the University of Oklahoma in September 2011, Virginia Euwer Wolff's poignant acceptance speech traced the influences that led her to write for children "at an age of vertiginous uncertainty."

Thanking all of you is one of the great pleasures of this Oklahoma adventure. The Neustadt tradition, now in its third generation, is bearing fruits that many of us may never exactly know. Their gifts have benefited students whom we may never meet, and those students may change our world in ways that might be too subtle for us to find out about.

The late Walter Neustadt Jr. and his wife, Dolores, so generous to the university, have done some nifty childrearing. The three Neustadt sisters, Nancy, Susan, and Kathy, have ventured into kids' lit, and their juries have honored Mildred D. Taylor, Brian Doyle, Katherine Paterson, and Vera B. Williams. So: My broad and deep thanks to the Neustadts, and to the University of Oklahoma, for letting me in on the Neustadt family fun.

I'd like to cite two moments from our Western literature. One is from a play that is not too widely known, and the other is from a story that nearly everybody has read.

These are two of the central concerns in literature for young readers: the moments of life-shaping decisions, and the secrets that the world seems to want to prevent the children from finding out about.

The play is one I saw in New York a few years ago. It's about two branches of a family living in two neighboring houses in the United States in the 1930s. Onstage we see the back porches and yards of the two neighboring houses, and each yard has a big tree, standing like pillars. Living in the houses are four aging sisters and three aging husbands. Through the first act, several people say about one of the aging men, "He hasn't started that business with the fork, has he?" and "Don't let him start in on the fork. . . ." So we in the audience are listening for it.

There was a time in his youth when he came to a fork in the road of his life, and made a choice, and in later years he's become obsessed with it. He wishes he had made the other choice, one that might have changed his life. He's trying to find his way "back."

I tell you this because books for young readers are so often written about that very moment: the moment of the fork. The moment the old man cannot return to.

I think we can all agree that every adult has thought about going "back to the fork." Not necessarily wanting to change our choices, but we all want the chance to look at that fork again.
The play is called Morning's at Seven by Paul Osborn, first produced in 1939. I saw a Broadway revival fifty years later. And we notice that in the play, the other family members don't want Grandpa to reexamine his life.

The second anecdote is from The Secret Garden, published one hundred years ago by Frances Hodgson Burnett. In the story, little Mary Lennox has gone to live in a huge English country house after her parents have died in India. In this cavernous house, little Mary hears a haunting, distant sound, like a child weeping. She tells the housekeeper, who says to her—remember what the housekeeper says?—"You didn't hear anything of the sort." What follows is not only a great story but a promise to us that there's always more than meets the eye. Always.

These are two of the central concerns in literature for young readers: the moments of life-shaping decisions, and the secrets that the world seems to want to prevent the children from finding out about. I have a task that I sometimes ask young students to do: to make two private lists. The first list is "the things your family or the people you live with always seem to talk about." I give them a very few minutes to jot these topics. And then I ask them the opposite: "List the things your family—or the people you live with—never, ever mention." I watch the brows furrow, I hear the ballpoint pens begin to click, I see the heads and hands dive for the paper.

This is an excerpt. To read the rest of Virginia Euwer Wolff's acceptance speech for the 2011 NSK Neustadt Prize for Children's Literature, see the January 2012 issue of WLT in print or digital format.

Virginia Euwer Wolff was born in 1937 in Oregon. After graduating from Smith College, she taught school, reared two children, and attended graduate school in four states before beginning to write for young readers in her mid-forties. Her novels focus on a learning-disabled sixteen-year-old boy (Probably Still Nick Swansen, 1988); twelve-year-old violinist Allegra Leah Shapiro (The Mozart Season, 1991); two sixth-grade softball teams in 1949 (Bat 6, 1998); and an unmarried teen mother, her two children, and their babysitter (Make Lemonade, 1993; True Believer, 2001; and This Full House, 2009).

She has lived in New York, Philadelphia, and Washington, D.C., but now reads, writes, and plays chamber music in Oregon.