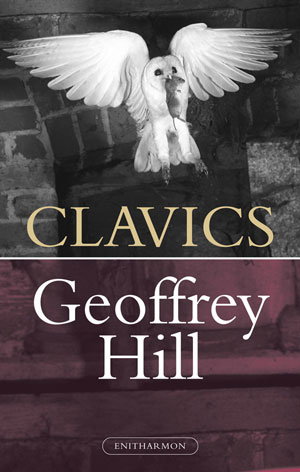 Only a poet with a sense of time as expansive as Geoffrey Hill's would attempt an elegy for a man dead almost four hundred years, as Hill does for the composer William Lawes. Yet Clavics is more than a lament for the loyalist composer slain in battle at Rowton Heath. It is a meditation on time and memory, on faith and the struggle to believe.

Hill's poetry has always been allusive, not merely as a matter of technique but also as a matter of subject, which is to say that he uses allusion to ruminate on memory itself. This tendency is evident in the form Hill adapts for Clavics, each section broken between two halves, the first of which mirrors George Herbert's "The Alter," the second his "Easter Wings." Herbert's poetry is itself a site of struggle between faith and doubt, and Hill appropriates this agon for his own purposes, pushing it even further with a syntax that strains against meaning. With the struggle for comprehension a central theme in the work, Clavics will certainly not lessen Hill's reputation as a "difficult" poet, a point the book's opening lines recognize in comparing the work at hand to Kabbalah and to numerology.

Yet when Clavics stumbles, obscurity is not at fault; abstraction is. In place of the vivid engagement with the concrete world that typifies such Hill classics as Mercian Hymns, the poem aims to maintain its momentum through accumulation of abstract statement. Consider these lines from the twenty-third section: "Dearly beloved, grasp these sureties: / Decrepit lies the world and all things fail, / Exact their toll; / the Judgement must / Make trial, trust / Late Dorothy's – Doctor D. Bethurum's – Lorn expertise / Locked in her Sermo Lupi ad Anglos." Knowing that Bethurum is an editor of the homilies of Wulfstan II, in which one may read the Sermo Lupi ad Anglos, may relieve the passage of its obscurity but not of its lack of concreteness. Even when Hill seems to offer a solid image, he doesn't, as in his reference to "the dense / Fluctuations of the material" or his statement that "aesthetics are an inclined plane." Both phrases flirt with the physical but lack enough detail to make the image real.

Yet one keeps reading, despite all that, because Clavics is wonderful for its sense of play in language and in time: words collapsing into other words, times collapsing into other times. Such play amounts at its best to what Hill himself calls "wit let-tipple into Grace." At a high point in his career, when other poets may be tempted to wax sententious, Hill remains playful and interesting. This sense of serious fun covers a multitude of sins and is one reason Hill remains a major presence in English-language poetry.