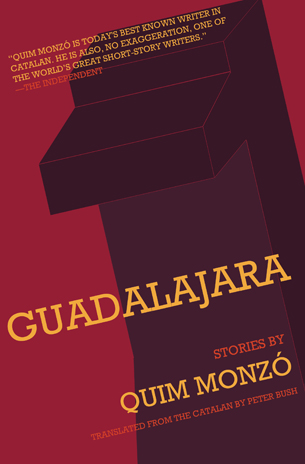 In "Family Life," the opening story to Quim Monzó's newly translated collection of stories, a little boy—fearing a ritual dismemberment—pleads to his father that he doesn't want his finger chopped off. "I want to be normal," the scared boy says, "like the other kids at school," to which his father replies, "Being normal has nothing to do with having one finger more or less." This line sets the tone for Monzó's Guadalajara, brilliantly translated by Peter Bush: a normal world has nothing to do with the normal.

Both Franz Kafka and John Barth (whom Monzó has translated, along with J. D. Salinger and Ernest Hemingway) are heavy influences on several of the stories. In one titled "Gregor," Monzó rewrites The Metamorphosis as a beetle waking up to find himself as an overweight teenage boy. As he struggled to control his new burdensome body, "his family stared at him from one corner of the room with a mixture of admiration and panic." In "Centripetal Force," a man tries to leave his apartment only to find himself back in his hallway. When he tries to enlist the help of firemen, they too get stuck in a stairwell reminiscent of an M. C. Escher print. Monzó's gift isn't in creating existential loops, but in creating characters who will do anything to escape these traps.

The second of five sections of the collection, in which Monzó rewrites myths and fairy tales through a contemporary, thus cynical, lens, reveals Monzó's Barthian influence. In "Outside the Gates of Troy," Ulysses and his soldiers fester in the wooden horse for days, waiting for the Trojans to fall for the simplistic trap. "Helvetian Freedoms" follows up William Tell, this time focusing on his son, Walter. Now a grown man, Walter recalls to his teenage son the legendary story of his father shooting an apple off his head. "How could you let him do that?" his son asks, making Walter reexamine that moment: if William cared for him, Walter reasons, his emotions would have made his hands tremble, making him miss his target.

Though one of the pitfalls of existential or absurdist literature is the sacrifice of "heart" and emotion for "ideas" and philosophy, Monzó, in small, masterful strokes, gives his stories a full-bodied existence. In "Gregor," for example, as the transformed beetle-now-boy lies naked on the floor, helpless in his predicament, his mother, still a bug, strokes her son's eyelashes with her antennae.
In Guadalajara, Quim Monzó joins contemporary short-story writers such as Etgar Keret and George Saunders with the ability to show the absurd in the real, and how the absurd reveals the real.