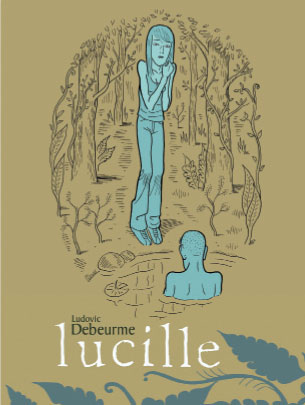 Ludovic Debeurme's Lucille is an entrancing addition to the library of contemporary bande dessinée available to English readers. Debeurme opens the story with a tentative series of vignettes that introduce the reader to two emotionally crippled teenagers. Vladimir, the son of a Polish sailor, develops obsessive-compulsive disorder in response to his father's progressively self-destructive alcoholism. The titular character becomes anorexic after her own father's absence destroys her self-esteem. In time, their paths cross, and fiercely blossoming first love acts as a salve to their inadequacies.

Debeurme strikes a perfect balance throughout between narrative and visual storytelling. His approach to the page is engaging, eschewing panel borders and allowing the captions and dialogue to coexist almost without separation in the perceived gutters between visual units. The clarity that emerges from this recipe for chaos is a testament to Debeurme's ability to guide the reader across the page. He unspools his story slowly in short narrative segments that give his characters plenty of time to reveal their eccentricities and pays off in generous emotional dividends once their two stories become one.

His drawing style is disarming in its simplicity, at key moments in the book reducing down to faces with no bodies. Yet, he is also capable of drawings of breathtaking sensitivity when giving the reader full access to the landscape adds some crucial element to the story. At times, his style is reminiscent of Canadian cartoonist Chester Brown. Whereas Brown is prone to locking his characters into tiny boxes to reinforce the reader's narrative distance from them, Debeurme allows them to loom large on the page, threatening to swallow it whole with their oversized emotions and all-too-recognizable human frailties. Lucille flirts with excursions into surrealism that bring a dreamlike quality to several key sequences in a manner reminiscent of fellow bande dessinateur David B. This element brings a poetic register to a story already pregnant with symbolism and pathos.

Though Lucille is a hefty book at 544 pages, Debeurme's narrative choices make it a quick but powerful read. Like adolescence itself, it concludes more abruptly than expected and with a bittersweetness that is not to be quickly forgotten. Lucille is one of the most arresting English-language debuts from the French market in quite some time and will hopefully pave the way for more works from Ludovic Debeurme in the years to come.