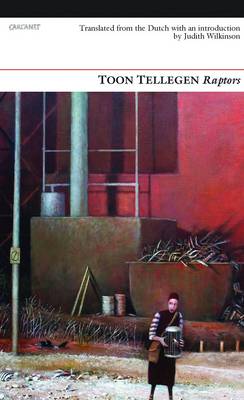 Toon Tellegen's Raptors is one of those books for which very little can really prepare you. Partly, we suppose we already know too much. It takes a book like this, seemingly hurled through the ether, to crack us on the head and wake us. This extraordinary long poem, with its startling inventiveness, tests our coma-inducing apathy to all things experimental.

In his preface, the Dutch poet opens: "Years ago I invented someone whom I called my father." Raptors is the product of those inventions. Each poem begins with the words "my father"; each circles, contorting around its theme of the inconstant patriarch. Each is a portrait in miniature of a man both comical and tyrannical, grotesque and pitiable: "My father / was a book // my brothers leafed through him, / pointed out the pictures to each other: / 'look, here we are superfluous / and there our souls have been trodden on / and there, look, there it would have been better not to have existed!'"

The sudden momentum swings of Tellegen's unorthodox narratives are marks of the poem's explosive power. Tellegen invents then quickly re-invents, draws then realigns and draws again in a series of constantly shifting scenes. And yet the reappearing figure of the father is coherent and convincing in much the manner Tellegen's translator, Judith Wilkinson, describes him in her introduction: a dominating and intense force "with his ominous, manic energy . . . His grandiosity, his constitutional hubris, his wild flights of fancy, coupled with a consummate neediness . . ."
Again and again, Tellegen visions him afresh: "My father / was something / no one could put their finger on // nice, said my mother, / but he wasn't nice, / brave, everything, / but he wasn't brave and not everything either."

It's one of the immense pleasures of this book that just when you think you've got the measure of the poem, Tellegen somersaults over your hand and off the page. His beautiful reversals and abrupt tempo shifts point back to a beginning, a new start, a fresh view, and the pace and elastic play of Wilkinson's English compels us to want to re-read a book we're still in the process of reading: "then my father fell on the ground, / changed his character and froze // and my brothers hacked a hoe in him, / fished in him for comfort and resignation, / built houses on him, and little palaces // and my father spread // like restlessness and standoffishness / despite himself."