The Sense of an Ending by Julian Barnes 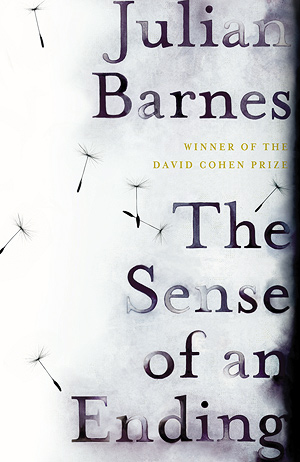 When it comes to contemporary British fiction, I've always been more of a Martin Amis man than a Julian Barnes one. However, after reading Barnes's latest Man Booker Prize winner, A Sense of an Ending, all that has changed. After reading this little treasure of a book, I have come to realize that I was missing the subtlety and grace of Barnes's prose. Where Amis may be more clever, and his prose more cutting, Barnes asks more of his reader, but again, more subtly, in more of an understated way. In a sense, Barnes's latest novel is like a very good single malt scotch, where Amis has always been more of a beer.

A Sense of an Ending is a short book, perhaps best read in one sitting, and preferably with that scotch. It is a novel about late middle age that is, I suspect, written for those approaching that time in their lives. The novel, written in two parts, tells a story about Anthony (Tony) Webster, perhaps the most boring and least likable protagonist in years. Part 1 recounts Webster's younger years and his friendship with two boys his age. When a third boy, Adrian Finn, walks into their lives, they are immediately taken with him. Throughout these recounted episodes, Webster begins dating Veronica Mary Elizabeth Ford, a young woman who may or may not be stringing him along. The first part ends with the suicide of Adrian.

The second part of the novel takes place many years later, with Webster divorced from his wife, Margaret, and in retirement. When he receives a mysterious letter from a lawyer informing him that Veronica's mother has left him five hundred pounds and Adrian's diary in her will, his past suddenly comes creeping back into his consciousness.

The rest of the book slowly reveals secrets and self-deceptions kept hidden by the weight of buried memories. Webster finds himself "on his own" as he attempts to navigate his way, sometimes awkwardly and shamefully, through the mystery of the last forty years of his life. But it's really the writing itself that stands out. There is a profound sadness here, and instead of turning the reader away, it grabs hold and forces us to listen to what it has to say.

Many "big" authors have recently taken up the subject of late middle age. Among those perhaps most prominent are J. M. Coetzee and Philip Roth. Yet Barnes does something with the subject that feels, at least to this reader, more honest than the others. Barnes gives us a sense of an ending rather than an ending. And perhaps that's all life really is—an ending that can only be sensed from all of the seemingly disparate strands of our lives, like some detached tension wires as they flail and snap in the wind and rain.