The Tao of Travel: Enlightenments from Lives on the Road by Paul Theroux 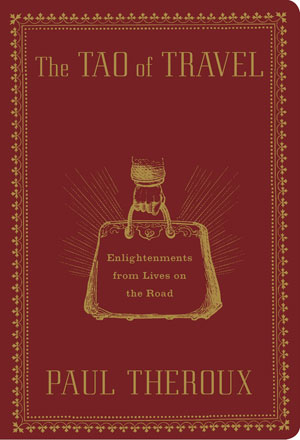 The Tao of Travel is a delightful collection of un-commonplace remarks and episodes by writers who have traveled, edited by a master of the genre. Even writers who have not traveled happily make for good reading, especially when a summer heat dome or winter's sub-zero has driven one indoors. Such conditions affirm Huysmans's thought that "the imagination could provide a more-than-adequate-substitute for the vulgar reality of actual experience."
The range of people and places, historic and present, runs to five index pages of double columns, from Edward Abbey and Africa to Yu Zhining and Yugoslavia. While most entries tend to be on the short side, certain writers get separate chapters: Henry Fielding, Paul Bowles, Claude Lévi-Strauss, Evelyn Waugh, and Samuel Johnson. Johnson is an example of a relatively untraveled writer who always interesting. On a walking tour, Johnson observes "how often a man . . . with his resolution, will, in the hour of darkness and fatigue, be content to leave everything behind him but himself." One travel writer named Murphy (Dervla) allows Theroux to create a chapter entitled "Murphy's Rules of Travel." Included in that chapter is this advice: "travel alone or with one prepubescent child," since children "rapidly demolish barriers of shyness or apprehension" when one approaches a community unused to foreigners. From a seasoned reporter, Theroux gets "Rosenblum's Rules of Reporting," and this useful advice: "On arriving in any distant place, the first thing you should do is learn the quickest way out." Well into the book, the observations lengthen in such delectable chapters as "Everything Is Edible Somewhere" and "Writers and the Places They Never Visited."

Ruskin says somewhere that an error or flaw in a masterwork is to be valued as evidence of individual human endeavor. Happily, the chapter on walking has one. It begins, "All serious pilgrims go on foot to their holy destinations—Chaucer's Canterbury pilgrims stand for so many others." Unfortunately, those pilgrims sat on horseback.

On the other hand, some of the best observations and stories come from Paul Theroux's own books—twelve listed. On trains, for instance: "Years before, I had noticed how trains accurately represented the culture of a country." Or, "In the best travel books, the word 'alone' is implied on every exciting page." His brief biographies of major travel writers enrich their excerpts and set them in useful contexts. His own contributions fittingly prevail in the end chapters, particularly in "Five Travel Epiphanies" that are published here for the first time.

The Tao of Travel is a text-filled volume, compact, eschewing the weighty illustrations that relegate it to the coffee table. For the reader who prefers to read of places that matter in their impacts on events and characters—in history or fiction—The Tao of Travel may seem quite enough, in and of itself. But with its handsome faux leather cover, rounded corners, and elastic bookmark, it is also ready to go somewhere.