The Audacity of Peace 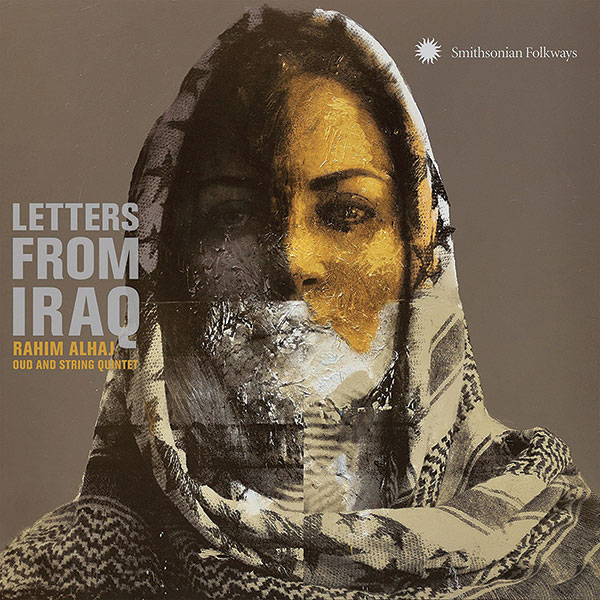 Iraqi-born composer Rahim AlHaj’s latest album, Letters from Iraq, is his most ambitious to date. AlHaj pairs masterful oud playing with a string quintet on eight original compositions that seamlessly blend a variety of Arab and European traditions. Moreover, each composition is inspired by an actual letter from Iraq, creating a kind of conceptual collage reflecting the mass disruption that has wracked the nation since the US invasion of 2003.

In his marriage of the oud with strings (and added percussion), AlHaj builds upon a musical formula first realized on selected tracks from his Little Earth album (Ur, 2010) but with a much greater sense of scope. The opening track, “Eastern Love,” draws most deeply from the Arab classical tradition: each section carefully modulating to the next; the melody, passed back and forth between the oud and the strings until they arrive together in unison and power; all expressed in ten beats to the measure even as the tempo quickens, ebbs, or disappears altogether depending on the structural demands of the section.

Other tracks push harder on the listener’s expectations as they blend the maqam (or scales) of the Arab music tradition with sections that call to mind the music of the Baroque. The string arrangements, overseen by Zack Kear, are remarkable in their chameleonic ability to shift from the powerful unisons that typify Egyptian firqah orchestras to the delicate harmonic interactions normally associated with the European chamber music tradition.

The sum is breathtaking in its capacity to evoke a wide variety of emotions in the listener: the wistful sadness of lost love in tracks like “The Last Time We Will Fly Birds”; terror in “Running Boy” and “Unspoken Word”; and even hope, which emerges from the closing pieces, “Fly Home” and “Voices to Remember.”

In the liner notes to the album, AlHaj declares his intention to “make music to make us realize peace.” It is a laudable goal and one that stands in stark contrast to a nonironic reading of W. H. Auden’s famous observation that “poetry makes nothing happen.” Although one might question how much of this intention may be fettered in an era when streaming provides none of the programmatic material that fuels the album, it is clear that the composer hopes to mine peace through the cultivation of empathy.

Through these compositions, AlHaj scales the incomprehensible violence, the crippling instability, the wave upon unyielding wave of grief, down to the unspoken voice of the individual—an individual whose story inspired the music and lends his or her name to the track. It is on this human level that we can grapple with a small piece of what can seem to be a labyrinth of suffering and loss otherwise.

It is an audacious claim in 2017 that music can help us realize peace, but, given the short supply of peace these days, perhaps the world could benefit from more audacity of a similar nature.