The Taste of the Earth by Hedy Habra 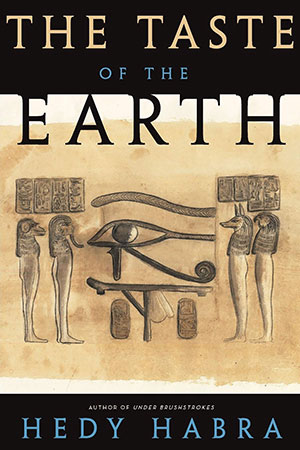 The collection first takes the reader into its intricate landscape through an amorphous mirror. Imagined, multicultural, and sensorial, the first poem’s mirror reflects a mélange of questions, realizations, feelings, and memories of those who populate or might have inspired Habra’s poetic expressions. Mirrors reappear in this collection as real objects but also as metaphors for bursting and unwanted recollections as well as deliberate remembrances. These processes accompany migrants, returnees, mourners, historical figures, just as they frame the making of words and imagination.

Memories are avid travelers in The Taste of the Earth. Such travels reignite the collection’s focus on the Middle East, where the mythical meets the quotidian through a complex combination of nostalgia and forgetting. We read, “Isn’t age supposed to dull our senses, the way we forget the features of loved ones, their faces losing their contours along with the fading memory of a feeling or frisson.” The frictions that memory and forgetting share are anchored in love of knowledge, love of learning, and love of texts as the most faithful companions until our death: “I have collected enough books to keep me company till the day I die.” For Habra, an Egyptian poet and winner of numerous book awards, the laudability of learning, creativity, and imagination must be resolutely rejoiced.

Mnemonic iterations hold specks of optimism but are never liberated from astonishment in Habra’s poems. “The House of Happiness” unfolds this dual quality to its maximum: “I wished to retrace forgotten steps steeped in oleander / but only see dried-up vines deserted / sidewalks where shadows sink in their own reflections.” Retracing the same past is hardly ever an inalterable process; it is nearly always somewhat new, amended, and astounding. While the articulation of memories boasts multidimensionality, the power of words is uniquely irreplaceable, especially in “Meditations over Phoenician Letters” and “Meditations over the Eye of Horus.”

Returning home, physically, mnemonically, and phenomenologically, is the collection’s most prominent leitmotif. Exiled subjectivities, in particular, confront the struggle of going home, which may turn into an alienating feeling: “Decades later, I no longer find my bearings, highways crisscross a city once mine in the map of memory.” Going home—which in The Taste of the Earth is subsequent to wars, personal loss, destroyed human lives, and annihilated landscapes—often manifests as a semblance of death. Coming home to the ruins of once-thriving communities and familiar but now perished human voices can also resemble an uncanny process of watching returnees’ expectations die abruptly. Dreams, nightmares, and hopes mix and blend, leaving us to confront the complexity of an exiled subjectivity, a subjectivity always caught between the imperfect past, nostalgia-plagued present, and indeterminate future.

The Taste of the Earth is firmly anchored in Middle Eastern localities without suspending its thematic universality. Habra’s themes cut across different cultures and eras and are richly palatable even when “some tastes remain unnamed, immured in silence.” The Taste of the Earth’s silences are, above all, interstitial, allowing further deepening of our own contemplative processes as we engage with Habra’s intellectual, cultural, and sensorial journeys.