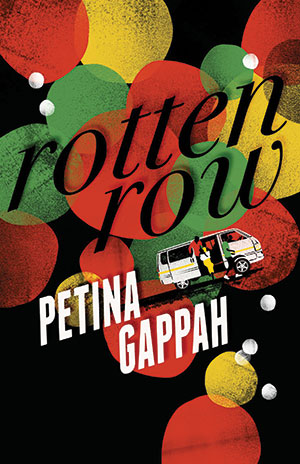 Petina Gappah’s new collection of stories is named after the street where the criminal courts in Harare sit: Rotten Row, where the powerful avoid punishment with a bribe and if the mob mentality doesn’t get you, a pothole probably will. The characters are policemen, divorcing spouses, the Old Familiar Faces gathered for a workshop, an executioner, and a ghost who will not depart until he sees justice. In two of her stories, Gappah, an international lawyer, creatively uses the forms of documents daily seen on Rotten Row, a postmortem report and a judicial opinion, to tell her stories. In the opinion, a female judge sets out in sixty-six numbered paragraphs the story of a failed marriage in her legal decision granting a divorce, including her explanation that since 2004 it is illegal in Zimbabwe for a man to rape his wife. In doing so, Gappah demonstrates the narrative dimensions of legal writing while bringing the law, literally, into her literature.

And what of the women in these stories? None of the stories is solely about how a woman suffers because of her sex. No, misogyny is omnipresent on Rotten Row and throughout Harare and across the geography of these pages. It rides the kombi in the second story, where a man harasses a female commuter; it speaks through a woman-hating female avatar online; and it has a beer over bro-talk in the concluding story. The women in these twenty stories are a murder victim, hair stylists, law students, feuding relatives, gossips, and “small houses”—mistresses defined by their male counterparts’ abilities to afford relationships with them. And through it all, they are more likely each other’s worst enemies than allies. For instance, there is Mrs. Chikombe, the Born Again Feminist, oppressing the woman at the conference who voices the reality of femicide due to domestic violence.

Like the best literature about the law, there are moments when the law fails to deliver justice as well as moments when it fulfills its promise. Or in the eyes of a character in “A Kind of Justice,” “maybe justice, when it came at all, always came late.” In this story a woman travels to Freetown, Sierra Leone, to research a documentary film. Once “a law student who cared about lofty principles, she had believed that she had the power to influence what happened in the world. . . . She had come to accept that the only power she had, if she had any at all, is that of witness.” While bearing witness to injustice throughout this collection, Petina Gappah also entertains, providing humor and even some room for hope.