Power: Limits and Prospects for Human Survival by Richard Heinberg 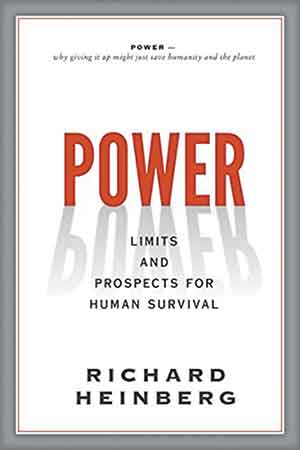 THE LATEST BOOK by environmental writer Richard Heinberg finds him working with familiar material but with a new and insightful twist. In Power (New Society, 2021), Heinberg welds the conceptual to the empirical in an interdisciplinary survey of the many meanings of power and how they operate in human culture, as well as how our relationship with power affects the ecological contexts from which our society and its comforts are derived.

Physicists typically express power as the rate at which energy is transferred, but Heinberg seizes on it as perhaps the ideal fulcrum for leveraging our understanding of how energy is concentrated and used to make change in the world, from the microscopic to the macrocosmic. By placing human exploitation of energy flows into a broader biological context, he demonstrates how our current predicaments (climate warming, dependence on nonrenewable resources, ecocide) are merely extensions of strategies that all life employs, often with recognizably disastrous consequences when not constrained by feedback from the system.

Heinberg explores social power in great depth, tying social complexity to the efficiency of energetic power exploitation. First postulated by H. T. Odum and later expanded upon by Joseph Tainter in The Collapse of Complex Societies, the “progress” of civilization is most plainly understood as an arc of exploiting energy in ever-more dense forms in order to produce more social hierarchy and, therefore, complexity. Somewhat counterintuitively, complexity not only increases the control that those at the top of the hierarchy can exert on those below (including those in the other-than-human world) but also the simplicity with which highly specialized tasks can be undertaken. The same power that allows us to use our phone to order a product manufactured on the other side of the world and have it delivered to our house also renders us dependent on those systems when power suddenly stops flowing smoothly and supply lines are choked out in its absence.

Power is a big book filled with big ideas amply supported by the variety of disciplines from which it draws its analysis. After two decades of writing on energy and its influence on industrial civilization, Richard Heinberg has both the breadth of knowledge and depth of understanding to make a compelling case for how our misconception and misuse of power has led to the confluence of predicaments we must now face.