A grandmother thinks of her two kite-flying grandchildren each time she wakes and sees the birds outside her window.

The windows start on the floor and stretch to the ceiling on all sides of the restaurant. From here, you can see the harvest fields and the wetlands further down surrounding us. Gabra and Teshome look like dust corns or stones that someone threw. They run fast and hard, as if they are on their way somewhere someone else decided for them. But it is only the wind and the kites that pull them along. They run down toward the wetlands, their jackets shining in purple and green.

Teshome runs ahead. He’s got taller legs than his sister although she is two years older. I worry they will continue onto the wetland when someone asks me how long we are open today. Gabra and Teshome don’t think we’ve noticed how they have been carefully unpacking and packing the kites back into their boxes in the attic.

We bought the kites in a winter market, one hour from here, two years ago. My daughter and her husband had just opened the restaurant then. It was one of those markets we understood came back every winter. The same day when the restaurant was empty, they tried them indoors. The kites hit against the ceiling, fell to the floor.

The children would not stop trying to get them outside. We started telling them stories to distract them, about children being carried away by heavy drakes, arriving somewhere completely different, but that just made them more interested. When spring finally came and we brought the drakes outside, the wind was perfect and they could fly the kites for hours. Their father and mother showed them first, ran down the gravel road while the kites flew in the wind.

When the last lunch guests have left, I walk after them. Their tracks are small with wide distances. It is clear that they have been running. There are also tracks after a stick Gabra usually keeps to see how much water there is on the wetland. Some say enough to keep an ocean underground, to provide water to the harvest fields close by. And on them the old herbs grow. It isn’t useless land.

Not like the large, excavated fields in our homeland. That needed to heal from the mining. The Italians looked for minerals during the occupation, then others took over, men from the government, companies. The sand earth spread over the last grass as if the earth was full of poison.

The tracks turn left, down toward the lake. Here, the boats are lined up like a necklace.

It is cold. I try to get my hands inside the arms of my jacket. The tracks turn left, down toward the lake. Here, the boats are lined up like a necklace. When I moved to this country Teshome and Gabra had already started school, but it was as if I had always been here with them. When their father and I came walking up the road toward the house the first time, Gabra cried granny so loud that the birds resting on the power lines scattered and flew away. It took a long time before they came back. Every time I wake and look out the windows I see the birds and think of them. Gabra and Teshome, brother and sister, looking straight ahead, with no thought of the wetland water.

When Teshome and I begin to fly the drakes, it’s like the wind won’t lift them high enough. We walk down the path by the harvest fields. When we begin to run, the wind catches on a little. Teshome tries to draw patterns with the lines, but it is hard not to get them entangled.

When we lose our grip on the kites, they quickly glide with the wind and then fall down far away, beyond the lake. We run in the same direction, plowing down the fields and then the wetland. It doesn’t matter that the fields should not be stepped on like this or that the wetlands are filled with water. We have to fetch the kites. When we reach the water there are no kites anywhere, instead there is garbage spread along the edge of the water and the small oak boats.

The boats look like they have always been there. Twigs and moss cover a few. Our boat is the last one in the row. It came with the restaurant. The old owner wanted to give it to us. He said he wouldn’t be able to use it where he was moving but that it had given him joy here. It was the best thing he knew, taking the boat out on Sunday mornings with his fishing pole even if there were hardly any fish left here in the lake.

We turn the boat upward, push it out a bit before we climb in and loosen the oars. It’s just a few meters before we reach the kites, floating on the surface. It’s like they are swimming. I stretch toward one of the drakes with my oar, reach it and pull it toward me. The ropes are tangled in seaweed. Teshome reaches the other kite and pulls it into the boat.

Around the fireplace, on the other side of the lake, there are four men in similar gray jackets: IGE logo in yellow letters, International Gold Exploration AB. They’ve been to the restaurant.

They are here to drill after minerals. They say there is copper ore under the wetlands, that we will see the copper smoke, feel the sulfur odor when they find it. Our grandmother has talked about it.

First she read the articles about it, then me or Teshome read them out loud so that she would not miss anything. It was as if she felt that if she did something now, it would make a difference back in time. 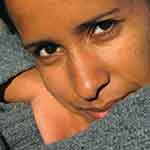 Lena Bezawork Grönlund is a writer from Sweden, born in Addis Ababa, Ethiopia. Her first novel, Slag, was published in Sweden in 2017. She has also published poetry in several journals.