In Krio, there is a word with Atlantic Ocean spray still swirling in its gut:
Freeborn. I heard this word often after dinner was prepared. If, say,

my sister and I couldn’t help but shovel soft, clementine-hued heaps
of jollof rice into our mouths on our way to the dining room, my mother

would stop us, demanding that we eat only after sitting at the table. Like
Freeborns. I should tell you that

she would then tuck herself into the corner of the kitchen, standing up,
no sound from her but the harpsichord clink of silverware against plate.

Freeborn—I’d still like to teach her to. Freeborn. Eye closed, I imagine us
Freeborning somewhere far from this beige bungalow, ripe with the smell of

stewed onions and tomatoes. We Freeborn elsewhere—with a coastal view,
on our beach-chair throne. The waves’ fangs hungrily rise before us.

Freeborn: I give my mother this old language, watch her grip it between
arthritic fingers, watch her toss the fossilized noun-verb back. Far. 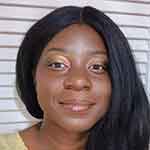 Yalie Kamara is a Sierra Leonean American writer, educator, and researcher from Oakland, California. She is the author of A Brief Biography of My Name (2018) and When the Living Sing (2017). Kamara’s writing can be found in Poetry Daily (Poetry Society of America), Adroit, Callaloo, and elsewhere. Kamara has been a finalist for the National Poetry Series competition and the Brunel International African Poetry Prize.