“THE CITY CENTRE was at once beautiful and scary. . . . The infrastructure alone—of brick and stone—was forbidding. The skyline—dotted by conical, sharp church steeples and tall chimneys—made him feel trapped. . . . Manchester brought to mind a Christian heaven of arches and arches, spires, steeples, pews and church bells. But why would the British sculpt snarling devils on their walls when they lived in such dark misty environs?”

This is how Manchester looks to the outsider, or more specifically to the Ugandan immigrant Abu, the protagonist in the first story in Jennifer Nansubuga Makumbi’s new collection, Manchester Happened. The date is 1950, but it could just as easily be 1800, when church steeples and mill chimneys clogged the smoky skyline like a chessboard midmatch. And it could just as easily be today, when, even though spire and chimney have given way to flat and office block, the city is still renowned for its gloomy atmosphere and the gothic, industrial architecture that confronts visitors at every turn.

Despite—or rather, because of—Manchester’s tenebrous reputation, the city has continued to attract writers for centuries. The beginning of Jane Eyre was written on the site where Manchester Metropolitan University now stands. Head north and you’ll find Chetham’s Library, the oldest public library in the English-speaking world, where Marx and Engels wrote The Communist Manifesto. Elizabeth Gaskell wrote her novels in a house on Plymouth Grove—you can still visit it. W. G. Sebald, who came to Manchester to teach, set the final, and most melancholic, part of The Emigrants against the foggy backdrop of “the sprawling mass of Manchester . . . a fire almost suffocated in ash.” My brother lives in a converted mill featured in one of the novel’s black-and-white photographs. If the photo had been taken from the other side, a few decades later, it would have displayed a sign that my brother misread as “burgers” (American cuisine is now ubiquitous in the city). It is in fact a sign for the International Anthony Burgess Foundation, a tribute to the writer who took the opposite trajectory from Sebald by leaving the city as soon as he could. But the “Manchester of frightful slums and hard-head magnates and cotton brokers gorging red meat in chophouses,” “the mother of liberalism and the cradle of the entire industrial system,” never left him.

I find myself in a similar position to Burgess, being continually drawn back to Manchester. The city has a staggering literary history, but it is perhaps more dynamic nowadays than it has ever been. Both universities boast renowned creative writing courses, with past and present teachers including Martin Amis, Jeanette Winterson, Lemn Sissay, and Carol Ann Duffy. In 2017 it was named a unesco city of literature. And as the most linguistically diverse city in western Europe, the city’s status as a cultural wellspring has become indisputable. The “dark misty environs” might remain, but now anyone can feel at home.

Books for Your Table in Chetham’s Reading Room 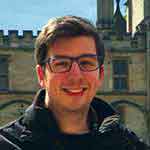 Joshua Allan works for Routledge books in Oxford, England, and writes extensively on the side. He has published in WLT, the Oxford Review of Books, Undercurrent Philosophy, Full Stop, Eunoia Review, and other magazines.