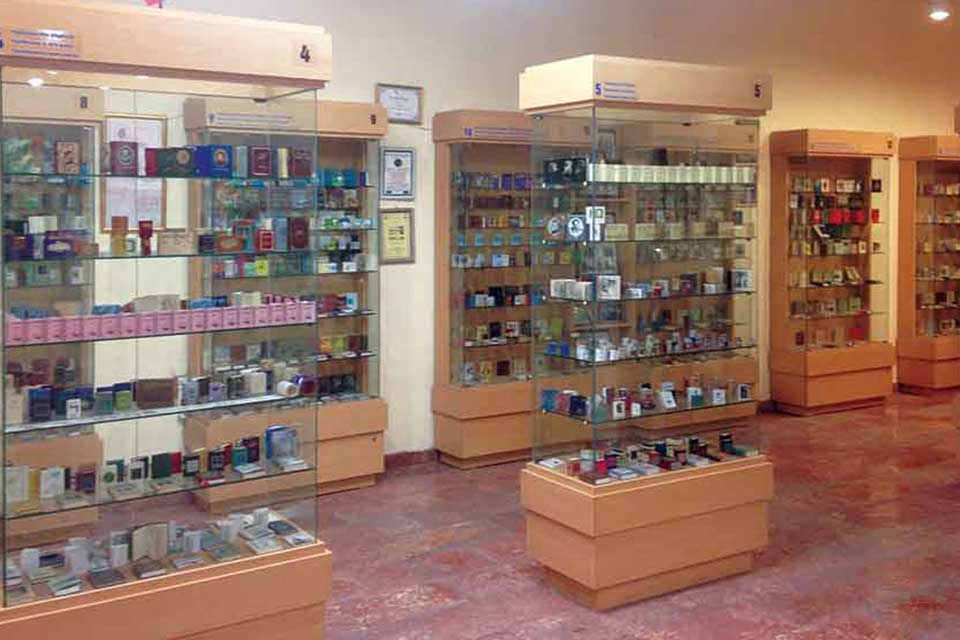 THERE ARE SOME moments in life when, upon entering a room, you realize you have stumbled upon that disturbing border where passion rubs up against obsession. In Baku, Azerbaijan, that place is the Museum of Miniature Books. On a quiet street within the walled Old City, Zarifa Salahova curates this spectacle of Lilliputian writing. There aren’t many books here that could be held comfortably, let alone read, but it’s a fascinating display of concentration and miniaturism. Needless to say, such collecting encourages hair-splitting, and here small isn’t just small but subdivided into the eye-straining range of macro-mini, miniature, micro-mini, and ultra-mini micro.

Even before I’d entered the door, museum assistant Aydın pounced, launching into a spiel about the museum containing some five thousand books from eighty-three countries. He led me breathlessly to the first glass case, containing a variety of petite religious texts. “This is our oldest book,” he said, pointing to an open tome on a tiny X-shaped lectern. “A Qur’an from 1632. One inch by one inch.”

Just how small can someone write? In 1929 North Dakotan James Zaharee covered a postage stamp with his name and the alphabet written thirty times each, plus the Gettysburg address written eighteen times. Ten years later, he put down the entire Declaration of Independence, including all fifty-six signatories and thirteen colonies, on a grain of rice. Of course, he could read a newspaper from eight feet and peddled his penning skill in a traveling circus.

There’s nothing by Zaharee in the MoMB, but there are books so small they might be a speck of lint. The smallest is the Japanese Flowers of the Four Seasons, which has twenty-two illustrated pages in its three-quarters of a millimeter square—mercifully, it comes with its own magnifying glass.

Most cases are organized by country of publication, a system that ensures a fairly random sorting. Hence, Socrates’ Wisdom beside a copy of the Greek children’s book Mister Gatto. While most of the collection comes from Russia (the city of Perm being a well of miniaturist literature), some aren’t obscure to Western eyes: The Call of the Wild, Alice in Wonderland, The Lord of the Rings (credit to one L. Tolkien). One finds the entire works of Shakespeare, in forty volumes, published in 1841. Alexander Pushkin seems to have drawn particular interest from miniaturists; the labor of their collective enthusiasm (or wrath) is enough to fill two entire cases—Eugene Onegin, Boris Godunov, and the rest shrunken to the size of a pinhead.

One case holds a display of physical artworks submitted by global artists in response to being asked what minibooks mean to them. Among the interpretations are an accordioning fold of gilded paper, a silver crab claw inside an oyster shell, and, tellingly, a pair of thumbscrews.

Why make books so small? What can anyone get from a half-inch copy of The Divine Comedy except myopia? It’s preferable to imagine clandestine reasoning behind it all. Keeping your copy of Elvis or Die Beatles secret in Soviet-era Perm would have been much easier if you could slip it discreetly into your pocket. The reality is more aligned with the kitsch of “holding the author in your hands.”

The search for completeness is always the undoing of collectors—as collections become more complete, so does the desperation to find more. The inclusion of some texts seemed like padding. Regardless of its size, could the 2007 International Ramada Hotel Directory ever be considered a book? While it’s a slightly hubristic undertaking, even that provides some entertainment. Hung around the room are certificates and well-wishes from various diplomats and worldly public figures, from Azerbaijani president Ilham Aliyev to Che Guevara’s daughter (who is credited as such), to erstwhile mayor of Cincinnati Charlie Luken. One letter, from Murad Yagizarov, People’s Artist of the Republic of Azerbaijan, suggests the museum is worthy of the Nobel Prize. The Ig Nobel, perhaps, which honors achievements that first make people laugh, and then make them think.