A young woman with two degrees and no job hits the streets of Palermo looking for work with only a Dorothy Parker poem to sustain her.

Ratty slippers, disheveled hair, puffy eyes, Ramona leafs through the newspaper that a kind hand slid under her door. At the kitchen table, a cup of coffee with milk and a piece of toast sit in front of her.

Her gaze falls upon the picture of an emaciated little boy with flies clustering at the corners of his mouth. Her stomach contracts: he’s just a child and he already looks like an old man. His forehead is covered with wrinkles. The wrinkles of hunger, Ramona says to herself, as she pensively gazes at this heart-wrenching image. Here’s someone who’s more desperate than I am. Is it pity she feels? Of course it is, but she realizes that her commiseration has quickly slipped from the child to her own self: thirty-two years old, fatherless, dual-degree magna cum laude, and jobless. Up until now she has lived off her mother’s pension, but with the introduction of the euro it’s lost half its purchasing power. She had to leave the tiny apartment near the university, which afforded her some degree of independence, and move back to her childhood home, where she sleeps on a couch in the dinette because her mother has rented out her room to a student.

Ramona has been getting up at seven for months now to go job hunting, but she’s found absolutely nothing. If she didn’t have the heated dinette to sleep in, if she couldn’t take advantage of whatever little groceries her mother shares with her, what would she do? It’s been a year since she’s bought a pair of shoes: both the blue flats and the black heels to go out at night are beat up and scuffed. I’ll have them fixed, she promises herself, even though she doesn’t know where. She’s never seen a shoe repair shop in the densely populated Zisa neighborhood where she lives. Do they even still exist?

Ramona starts leafing through the paper again, pausing distractedly at the center spread. A half-naked woman is featured in a beer ad. For a moment her mind, still sleepy, lingers groggily, searching for the connection between the beer and the suggestively undressed woman, but she can’t find it.

Finally, here is the classifieds page. “Shampoo assistant for hair salon wanted.” Red checkmark. Why not? Further below there’s an ad for a delivery boy from a bakery. But could a delivery girl also apply, or not? Checkmark on that one too. “Bricklayer wanted,” “housekeeper wanted,” “model for the new line of Comfort and Seduction swimsuits wanted,” checkmark or not? A recent grotesque experience at a modeling audition for a Candy panties ad comes to her mind. She found herself trapped in a pink parlor with only a pair of cherry-red panties on while a bald, paunchy, self-styled director instructed her to bend over, lift her leg, push out her chest. Meanwhile, a mustachioed photographer, squatting on the floor, was wielding a large camera that flashed and sounded like a spark-ignition engine. The director forced her to assume increasingly demeaning postures and she complied, albeit reluctantly, hoping it would soon be over and she’d walk out with a little money in her pocket. But it got worse. The bald, paunchy director asked her to take off her panties “to take the shoot to the next level,” and as she mumbled that was not part of the deal, she found him beside her on the loveseat undoing his pants. In the meantime the photographer with the bushy moustache kept shooting. At that point she had fled the scene swearing. She finished dressing as she ran down the stairs. Nope, no checkmark. She doesn’t think she’ll show up at 16 via degli Emiri to do an ad for the Comfort and Seduction swimsuits.

Wanted, wanted . . . “Door-to-door saleswoman, good appearance, own transportation.” No checkmark here either. She’s already done it once and has no desire to try it again. She was required to be at the agency at five in the morning with her old car bought on installments, pick up two briefcases filled with watches, and throw herself into the chaotic traffic with the appointment list on the dashboard. She climbed millions of stairs, knocked on hundreds of doors, came face to face with rude people, jerks, sleazebags. And when she finally found a nice person, she got stuck listening to some forlorn woman’s trials and tribulations. She was lucky if she sold two watches by the end of the week. Plus the money she spent on gas was more than what she made selling the damn watches. No, she was definitely not cut out to be a saleswoman. She always ended up taking pity on people or getting scammed.

“Seeking elderly caregiver for ninety-year-old retiree requiring assistance at home.” No checkmark. She’s already done that too and came out of it feeling like a wreck. Old Mr. Emilio was quiet, he never yelled, didn’t drool, but he wet himself as little as five minutes after she’d changed him. Just like a spiteful child. He actually smiled happily while she cleaned him up and changed him—and less than an hour later she’d smell urine. She would ask, “Mr. Emilio, did you wet yourself again?” and he’d hang his head, blushing.

There was something so childlike and endearing about him that she could not reproach him. And yet he had children in their sixties who came to see him every two or three days, spoke to him in a sweet voice, bent over to kiss the light fuzz on his head, and left. And she stayed, a prisoner of that room reeking of urine, at the mercy of a ninety-year-old child.

After six months she could no longer stand the constant change of diapers, the cleaning up and washing of wet underwear, and she left without even asking for her last paycheck. He said goodbye with tears in his eyes. No, no caregiver.

How can those two degrees she earned with so much hard work be so utterly useless?

Come on, she tells herself, stop being picky, you’ve got to make some money somehow! How can those two degrees she earned with so much hard work be so utterly useless? She had applied for all the positions you could possibly imagine to get a teaching job in a school. But every time she found herself competing with two thousand other applicants, and the ones who got the job almost always knew someone with connections. She placed hundreds of ads, prepared to give private lessons even in her own home, in the dinette where she sleeps and studies, but didn’t get any responses. Could she be jinxed?

She gets up, washes, gets dressed, goes to say goodbye to her mother, who’s darning socks for a neighbor. She already knows that at the end of the month she’ll get paid with ten fresh eggs, or a basket of figs, or even just a packet of pasta.

The hair salon from the want ad is at 41 via General Cadorna. It’s nine in the morning and the shop is already full. Girls in green smocks come and go, bending over curly and straight heads of hair. Others, gloveless, are busy spreading toxic dyes on the hair of semireclining ladies chatting with one another while a petulant syncopated music plays on the radio.

Ramona steps forward timidly. A large woman approaches her and asks her if she wants a nourishing shampoo or a dandruff treatment. “No,” says Ramona, “I’m here for the ad, aren’t you looking for a shampoo assistant?” The large woman’s expression changes immediately. She scrutinizes her from head to toe with hard, inquisitive eyes. Then she replies, enunciating each word slowly: “Already found her, stupid, you’re too late,” and she juts out her chin at her as if to tell her to get lost, that she doesn’t have time to waste.

As Ramona walks out she stumbles clumsily and almost falls down on the sidewalk. She sits on a doorstep, discouraged, and mechanically repeats to herself a sing-songy piece of verse by Dorothy Parker that lodged in her brain and comes back to her whenever she feels like dying:

Razors pain you;
Rivers are damp;
Acids stain you;
And drugs cause cramp.
Guns aren’t lawful;
Nooses give;
Gas smells awful;
You might as well live. 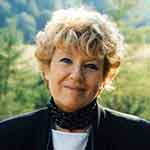 Dacia Maraini (b. 1936) has established herself as a leading contemporary novelist, poet, dramatist, and journalist. She founded an all-female theater company, is the editor of Nuovi Argomenti, Italy’s premier literary journal, and is recognized among the foremost Italian writers. She was a finalist for the Man Booker International Prize and a three-time nominee for the Nobel Prize in Literature. Works by Maraini available in English translation include The Holiday, The Age of Malaise, Woman at War, The Silent Duchess, Bagheria, Voices, and Darkness. 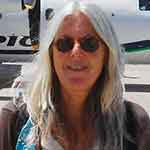