A few days into a third lockdown, a cat and her human companion have differing views about how to handle an army of slugs attacking the petunias.

My cat P., of uncertain parentage, helps me with the gardening. The status of the petunias I purchased at the plant nursery just a few days ago, on the eve of the third lockdown, is rather poor. “They don’t have any leaves at all,” P. says, as if I haven’t noticed that myself. “Who ate them?” we ask one another, without answer.

“Listen,” I tell her. “Let’s lay in ambush tonight and see what’s going on.”

“Ambush is my middle name,” P. says, as if I didn’t know that she ambushes me in my bed every night by stalking my legs, which she apparently likens to giant mice, so that she can pounce on them. But since there are all sorts of mutually agreed-upon lies between us, and since we try to preserve a status quo that would not be worth upsetting after so many years together on account of a few minor inaccuracies, I keep my mouth shut.

Since there are all sorts of mutually agreed-upon lies between us, I keep my mouth shut.

In the evening, we sit on the couch watching the news. I’m under the blanket and she’s on top of it, but that’s only because I’m afraid that if I let her under the covers, she’ll bite me at the first opportunity. During a commercial break I tell her, “Don’t you remember we planned to stand guard in the garden this evening?”

“Ummm . . .” she responds. “Do ‘guard’ and ‘garden’ come from the same root?” (You must understand, my cat P. did not have the benefit of a proper education, and her knowledge of language and her knowledge in general are products of her natural intelligence alone.)

“No,” I tell her. “They are spelled differently.” But I know that the point of her question is really just to distract us from the need to go outside.

And yet we go. Just as I’m about to illuminate the plants with the flashlight on my cell phone, P. reminds me that she descends from tigers and is blessed with night vision. “It’s the slugs, those thugs,” she says. (She has a musical ear and a knack for language, as you’ve no doubt noticed.) And indeed, an army of slugs had stationed itself on whatever was left of my flowers, while a force of armored snails had already advanced to devour my strawberries.

This does not fit in with my plans. Quite a few years ago, my husband and I traveled together with our daughter to Sweden one summer. The friend who hosted us had taken upon herself the responsibility of caring for the garden allotment of another friend who was away from the city on a trip. This garden was part of a large park area located in a central location in Stockholm. Yes, that’s how it works. In Stockholm you can rent a pea patch to cultivate in the center of the city. Sometimes in the summers you’ll see an old lady riding the subway carrying a basket with large zucchini, a bundle of carrots, and other such vegetables. If you’ve ever encountered an old woman of this sort, you can be certain that for the next two weeks her family will be eating watery vegetable stews from her garden.

In any case, this friend of my friend never grew vegetables. Her garden was full of strawberries, only strawberries. I had never seen such strawberries. The bushes they grew on were enormous, and the red, ripe, sweet strawberries poked out everywhere. In the absence of the owner, we watered the garden plot and raided the strawberries. We devoured them until we nearly burst, and our lips turned red as blood. “Mother,” asked my daughter—this was her first visit to Sweden since we had left many years ago, “why is it so green here, and how come they have strawberries like this?” I explained that the price of a summer like this was a harsh, cruel, and protracted winter, but my daughter’s desire for strawberries burned in my heart, and ever since then, I’ve tried to grow them. So I resented the snails eating their leaves and fruit. 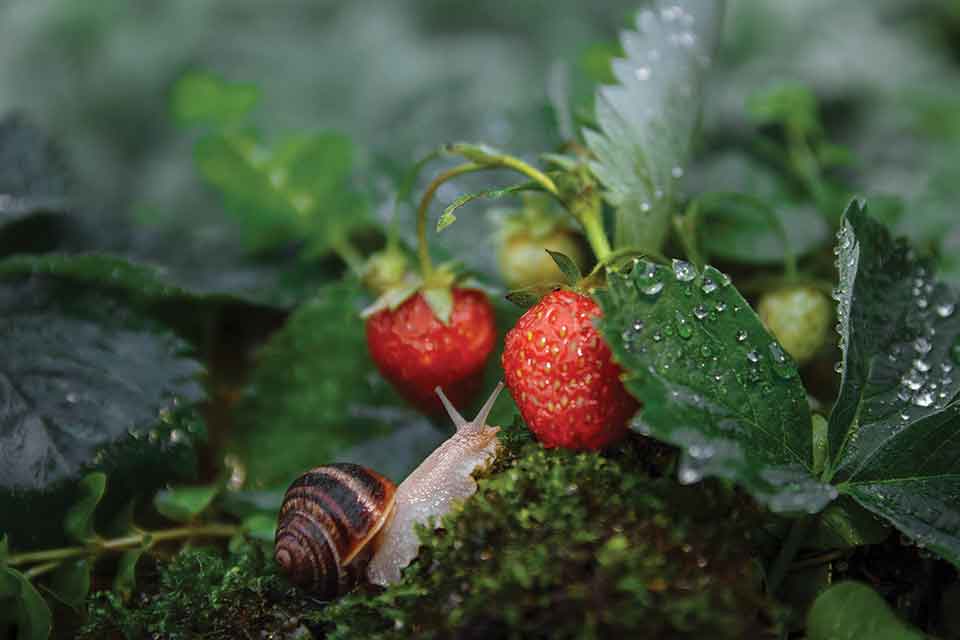 We devoured the strawberries until we nearly burst, and our lips turned red as blood.

P., who always knew how to tug at my heartstrings—and not necessarily on the most enlightened of them—said to me, “Come on, send them to hell. Kill ’em all! Why not? They’re pests. Here, look, I’m rolling one to the edge of the railing and tossing it down below. You hear that splat? That’s death for you.” P. does not content herself with words alone, but rolls another snail with her front paw and bats it over the railing. The crunch of its shell resounds in the nighttime silence.

“P.,” I tell her, “they are living creatures, like you and me. Look, there’s something almost human about their tentacles. Have mercy on them. Maybe we’ll collect them in a jar and transfer them to a field?”

“Are you nuts? They’re not even mammals. What do we have in common?” she says. “Let’s get rid of them lickety-split and then go back to the couch and warm up. It’s almost time for Master Chef and it’s the fish episode, I’m crazy about that one.”

“You know I’m a vegetarian. Once you’ve seen fish launch themselves out of the water in the summer with that silvery dazzle of light that envelops their bodies, you just can’t eat them.” I tell her. “It’s a relief that you don’t eat me.”

As if it’s hunger that dictates her behavior. Only a few days before the ambush, P. killed a spider, leaving behind an orphaned sac of spiderlings. I told her a spider is a wonderful mother, that she drags her egg sac everywhere she goes, and when they hatch, she protects the spiderlings until they are mature enough to emerge. But my pleas fell on deaf ears; P. snatched the spider and killed her without a sound. The spider’s mutilated corpse in the living room is all that remains.

That’s how I know that it’s not hunger that governs her behavior, but cruelty.

“Why did you do that?” I asked P., but she straightened her tail, feigning insult, and turned her back, saying, “It wasn’t me.” That night I had to sleep without her. When she’s offended, there’s no one more spiteful.

Maybe that’s why she particularly likes The Crown, which we had been watching of late. She identifies with the characters—and not just because they, too, rose to power by chance, rather than on account of their talents, but also because P. doesn’t work for a living, much like them, nor is she preoccupied by mundane concerns.

And yet I loved her. When she stopped speaking a few weeks ago, I didn’t know what had happened. “Is something wrong?” I asked her. “Did I say something?” She didn’t respond. Afterward, she stopped eating. “Don’t you want some chicken?” I asked, but the boiled and cut chicken wings I offered remained in her dish. Nor did she touch any of her cat food. I crushed it, ground it, mixed it, poured it . . . but nothing helped. Soon her figure, which for years had resembled mine, began to wither away.

“What is it?” I asked. She remained silent. I tried to think how old she was but couldn’t recall. She’s been at my side forever. Still she grew thinner and thinner. She didn’t eat or drink, and two weeks ago, on Saturday morning, when her fur was falling out and she could barely stand on all fours, she looked at me with a parting glance and simply went out on her way. Part of our status quo is that we don’t upset one another unnecessarily.

“Oh, well,” they said to me. “Cats have nine lives. She’ll be back” But I’m skeptical because P. was an uneducated cat, and she wouldn’t have known that detail about cats’ lives and their many souls that travel from who-knows-where.

Meanwhile, I posted an ad that I’m looking for a raven. A few have called already, but I’m not sure they’re the right fit. Maybe the time has finally come to thaw RIP the raven, who was my father’s constant companion, and from whom I learned how to speak with animals. Since his death, RIP has been waiting his turn in the cool basement of our home. 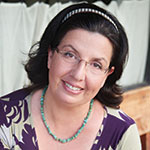 Alit Karp is a literary critic for Israel’s daily newspaper, Haaretz. She frequently authors opinion columns on issues related to minority rights and freedom of speech in Israel. Her story “The Princess” appeared in Asymptote in 2016 and was selected by the Guardian (UK) for its Translation Tuesday feature. Her story “Made Flesh” was published in 2017 by World Literature Today. Her book Geese: Travel Impressions from Sweden was published in 2018 by Afik – A Channel for Israeli Literature. 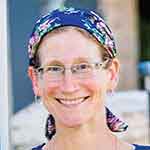 Ilana Kurshan is the author of If All the Seas Were Ink, published in 2017 by St. Martin’s Press.