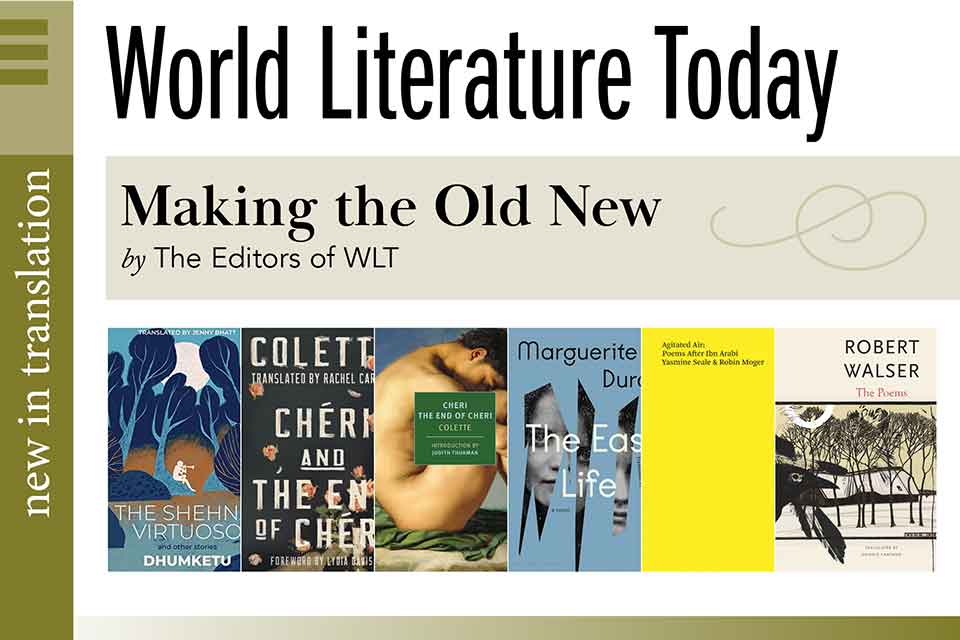 The Shenai Virtuoso: And Other Stories

DEEP VELLUM PUBLISHED this first substantial collection of Dhumketu’s (1892–1965) work available in English in July. Jenny Bhatt translated from the Gujarati. These twenty-six stories include at least one drawn from each of Dhumketu’s twenty-four collections.

Chéri and The End of Chéri

Chéri and The End of Chéri

ALSO FROM FRANCE, Bloomsbury will publish Marguerite Duras’s tale of a young woman’s existential breakdown in December. This first English translation of the novel is by Emma Ramadan and Olivia Baes. Kate Zambreno provides a foreword. Duras is well known for her 1984 Prix Goncourt–winning novel, The Lover.

EXCHANGING TRANSLATIONS and then rewriting in response to what they receive, Yasmine Seale and Robin Moger engaged in this correspondence in poems first written by Muslim philosopher and poet Ibn Arabi (1164–1240). The book, published in February, includes the original Arabic poems and a series of translations and retranslations resulting from this collaborative process.

OCTOBER BROUGHT SEAGULL’S publication of the first collection of Swiss writer Robert Walser’s poems in English. Daniele Pantano translates from the German. The book includes notes on dates of composition, draft versions, and brief biographical information on characters and locations that may not be known to readers. “As an antidote to the crassness of mainstream culture, Walser is, in fact, the perfect writer for our times, and since the nineteen-eighties he’s experienced a slow resuscitation,” Mary Hawthorne wrote in the New Yorker in 2012. The resuscitation continues.