I take a book off the shelf in a small graduate office I wander into that resembles a bunker. The book is Cyclonopedia, by Reza Negarestani. I thought the bookshelf was shared among the students, but E tells me it belongs to J, who brought his entire bookshelf to the space when he arrived. Now that I have stolen this book from J, whom I barely know, I am beginning to learn what sorts of thoughts J writes into the margins of books. For example, next to the tulips, Christmas Cactus in bloom in my room, pinkish lilac, pink hydrangea, pink roses of sharon, rare pink poppies, J has written: ¡pretty!

Two small stars penciled in J’s script frame the sentence: Xenopoetics has something to do with composing out of distorted materials. The first star is lightly marked and narrow, as if reaching for something. The second is dark and almost indecipherable. It appears J began to draw this star, made the wrong move, and, in an attempt to correct it, retraced the figure several times out of bounds.

Bit by bit I uncover information about Reza Negarestani, who is both the author and his character in Cyclonopedia. As an author, he once took an interview with my colleague, who asked him questions about the horror films of Dario Argento. As a character, he left a box of mysterious notes under the bed in a hotel room in Turkey. As for J, whose book I stole: he pieced the story together before I did, and because of this, I feel toward him a kind of reverence. And though I would say his notes are leading me farther from the answers, this, I believe, brings me closer to the truth.

By inserting brackets, J indicates the importance of the following: [ One page is missing, one or two lines are pseudonymously or anonymously quoted, one scene leaks from the future to the past, an object evades chronological sequences, a number turns into a cipher, everything looms as an accentuated clue around which all subjects aimlessly orbit, leading into an eclipsed riddle whose duty is not to enlighten but to make blind (aporos of the light) ]. Here, J closes the bracket.

J has underlined the words distortions and inauthenticity, and I underline them again for solidarity. At an angle, below the fragment my own handwriting, J writes: fuck Yes, lowercase fuck uppercase Yes.

Interrupted by a tweet from the president, I set the book facedown, bending a page in the process. The tweet reads: If Iran wants to fight, that will be the official end of Iran. Never threaten the United States again! 58k message bubbles, 70k retweet arrows, and 239k thinly outlined hearts. I wish J had read the tweet first and made a note in the margins. A single word or underline. A faded star or haphazard arrow. Some clue as to where this is all going. 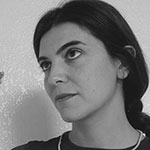 Nilufar Karimi is an Iranian American poet and translator. Her works have appeared in West Wind Review and Alchemy Journal of Translation and on behalf of the San Diego Asian Film Festival of the Pacific Arts Movement.