Dystopian fiction from the Middle East, 27 years after Tiananmen, and more 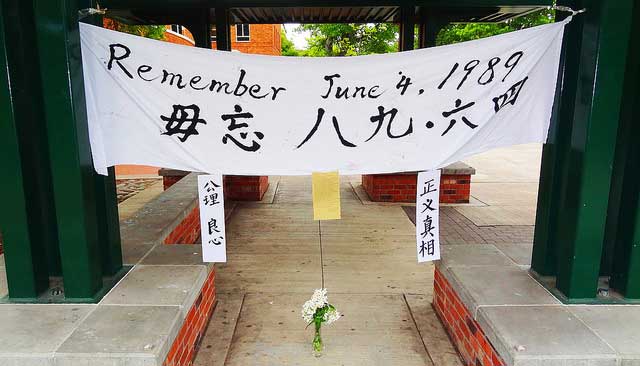 Poet Mai Mang shares these two poems in the wake of the 27th anniversary of the Tiananmen Square Massacre.

Translator Deborah Smith, who recently received the Man Booker International Prize, converses with PRI about how she started learning Korean six years ago and how she translated the prizewinning book by Han Kang.

As part of the Los Angeles Review of Books’ Multilingual Wordsmiths series, translator Edith Grossman talks about reading Spanish and the pitfalls of literalism.

Author Brian Doyle is bringing his Epiphanies blog on the American Scholar to a close, but you can read five bonus send-off columns in the meantime. For more, you can read Doyle’s short story “Crew Cuts” from the January 2015 issue of WLT.

A new wave of dystopian and surrealistic fiction has risen among Middle Eastern writers.

How are libraries around the world doing? Flavorwire takes a look at new data from the Annual Library Budget Survey.

In this essay from Electric Literature, Amber Sparks writes about the challenges of being a short-story writer and the pressure to write a novel.

Egyptian-American aphorist Yahia Lababidi discusses his newest book, what drives his imagination, and his writing routines on The Mantle’s podcast.

What is “grip lit”? Minnesota Public Radio answers the question and takes a look at the latest literary trend.

Via Literary Hub, Matthew Norman shares what to do when no one shows up to your reading.

A rare first-edition copy of Alice in Wonderland is expected to sell for between two and three million dollars.

The University of Oklahoma Press is having a summer book sale! One of its most recently published books, The Mexican Flyboy by Alfredo Véa Jr., is reviewed in our current issue of the magazine.

The Independent lists 12 bookstores every reader should visit in their lifetime.