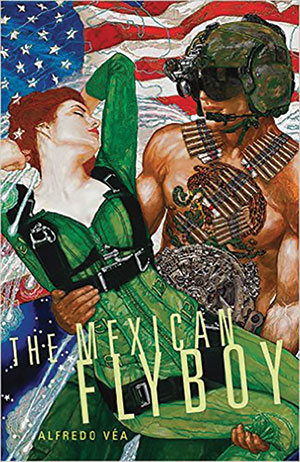 Alfredo Véa Jr.’s The Mexican Flyboy is a novel likely to enhance its author’s reputation as a writer primed to break through to a larger audience. His previous three books, La Maravilla (1993), The Silver Cloud Café (1994), and Gods Go Begging (2000), gave him an elite status as a writer admired by other novelists and Latino fiction specialists. The Mexican Flyboy has the potential to elevate Véa’s standing to another level among such names such as Juan Rulfo, Julio Cortázar, and contemporaries Sandra Cisneros, Rudolfo Anaya, and Junot Díaz as a writer of the first rank coming into his prime.

A hybrid steam-punk, sci-fi, comic-book fantasy, detective fiction of a novel that is at moments hilarious and also deeply moving, The Mexican Flyboy follows the exploits of Simon Vegas, a man obsessed with martyrs and innocent people who over time have suffered needlessly. He seeks to understand how cruelty comes to those who deserve better in their lives—Joan of Arc, John Brown, Vincent van Gogh, Anne Frank, Malcolm X, Amadou Diallo, among others. To alleviate suffering, he steals a time machine from the US Army, jerry-rigs it as a mobile device for traveling through space and time, and rescues victims wherever they are in the world. A version of the legendary Archimedes Mechanism (an actual machine) that Archimedes created in 200 b.c., his device allows him to “fly” through time and space, around the planet, and try to save victims from a painful death.

This poetic book’s guiding vision centers on the time machine itself. Prior to being a time machine, the actual Archimedes Mechanism was a navigational tool calculating lunar cycles, tides, and the appearance of constellations—a generator of complex perspectives. The leveraging of “perspectives” is somehow key to Simon’s ability to see, visit, and intervene at other times and places, suggesting that the perspectives one adopts change everything. As Simon moves from being a migrant farmworker at the novel’s beginning to someone envisioning hemispheric and world changes at novel’s end, this book challenges readers to identify him as a “magus” intervening to heal the wounds inflicted by cruel people and history itself or as a delusional victim of his own time’s craziness and social self-destruction.

Dr. Robert Con Davis-Undiano is Executive Director for World Literature Today. RC (as he is called) joined OU’s faculty in 1980, and in 1999 he was named Executive Director of OU’s international magazine World Literature Today and holder of the Neustadt Professorship in Comparative Literature. In 1999, he received a Presidential Professorship, and in 2004 he became the third recipient of the prestigious Sullivant Award for Perceptivity. In 2005, he became Dean of OU’s Honors College.