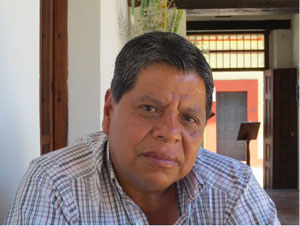 I’m in Guadalajara as one of three judges for the Premio de Literaturas Indígenas de las Américas (Prize for Indigenous Literatures of the Americas), a three-year-old prize with a US$25,000 purse that is already well on its way to becoming the “indigenous Nobel” for Latin America. The Mexico-based prize’s guidelines stipulate that two indigenous Mexican writers be joined by one international judge, a role I was nominated for by the Mazatec poet Juan Gregorio Regino. I am joined in my task as judge by the first winner of the prize, the Sierra Zapotec novelist Javier Castellanos, and the Yucatec Maya novelist and short-story writer Sol Ceh Moo. Over the course of five hours on the social sciences campus of the University of Guadalajara, the three of us discuss the seventeen candidates writing in over ten languages, from the Aymara of Bolivia to Mexico’s Isthmus Zapotec, occasionally arguing about who best meets the prize’s stated criteria, and—fortunately—sharing in an almost constant laughter provoked by the pleasure of the challenge before us.

The prize alternates genre each year, and this year, following prizes awarded for the novel and for poetry, its genre was the short story. In our evaluation of the prize submissions and in our experience as readers and writers actively engaged in the contemporary indigenous American literary landscape, we notice that the genre is underdeveloped in comparison to the novel and poetry, perhaps because of the same commercial underappreciation the genre suffers in English and Spanish, or—and here we enter the realm of speculation—perhaps because the story, shared aloud over meals or during the family time before bed, has a well-defined role in many indigenous communities and flourishes in the oral realm. Nonetheless, it seems to us that there is no genre more closely connected to the everyday life of the contemporary indigenous Latin American, none more likely to be engaged with on a regular basis, even if not in printed form.

Ultimately, we decide on a winner that I’m proud to say is incredibly deserving, and it’s my hope that his winning of this prize will introduce his work to new audiences in English, Spanish, and his native Tseltal, a language from the Maya family with over 450,000 speakers in the highlands of Chiapas. Josías López Gómez, from the village of Oxchuc, Chiapas, worked for over thirty years as a bilingual educator in public elementary schools before retiring in 2013. He has published four bilingual collections of short stories since 1999, translating his Tseltal originals into Spanish so that he can reach a wider audience. In addition to the high quality of his writing, which engages with Tseltal culture and life while at the same time addressing universal themes, we are impressed with his literary activism, as organizer of the Union of Maya-Zoque Writers, and his commitment to the education and cultural memory of his people.

Ninth of August, 2005. It’s four in the afternoon. I arrive home with my black shoes dusty and a spiral-bound book in my hand. I open the wooden door’s lock. I enter and feverishly search for the liter bottle of pox on the altar. I grab the bottle and tip it toward my lips, but someone speaks to me from behind. I turn on my own axis, and the pox overflows my mouth. It wets the sleeves of my sky-blue shirt. It’s María Mélida, whose last name I don’t want to remember, woman of pure beauty and clean heart. She approaches the door to my home. She looks me in the eyes, smiles, shoots off, I came to read your stories.

Her visit surprises me, I didn’t know how to answer her.

—Okay. I said nothing more.

I invite her to come in, she still returns my gaze as if to bid goodbye to the resplendent Father Sun. She sits on a wooden bench. She takes my spiral-bound, opens it, slides her index finger down a page of the first story and turns it, keeps reading. Another page goes by, while I drink sips of aguardiente. Some time later, Meli finishes reading. I look at her and she returns my look, saying, I like your stories. You draw us near to life, to the way the Tseltal Mayas of Oxchuc see the world.

I worked on them for months, I answered her.

Two motives helped me write them. The first is to return, not in life but through the written word, to the existence of a town that has been hit hard with misery, humiliation, and racism. The second: to try to repair lost origins, hidden names, forgotten things, to make the river sound and the hundreds of birds, nocturnal animals, and small insects join the chorus begun at the world’s navel, the land of the men of corn.

Meli, with the shine of her smiling face, makes me feel alive like never before. She takes other books out of her backpack. She smiles. Later we turn their pages with enthusiasm. She tells me, Your stories aren’t the first written in Mexico. There are other traces of distinguished indigenous poets and writers. They circulate here and there in printed form.

That’s right, written indigenous literature is in the process of formation. It’s growing, but not developed. There is still no singular figure within contemporary indigenous thought.

Yes, although there are a great number of attempts. Reading stories or poetry created by the indigenous writer enriches the teaching and learning of their culture.

It’s not simple work. There is a great void caused by years of rejection and the neglect of the indigenous language. That void can’t be filled in just a few years. It’s rooted in the old belief that the indigenous language is something less, that it’s not a language. It’s thought that it doesn’t have a grammar because its the tongue theIindians use. There’s still much to be done to strengthen their writing, but despite these problems, the times when our masters and governors punished indigenous people for speaking their language are slowly fading into the past. Today we can write it.

There’s no simple answer. It’s not just one factor, but many. The Spanish language has more power than our language. Indigenous literature hasn’t secured the place it deserves. The handful of indigenous poets and writers can’t find places to publish, many don’t have support to live. They write in the blinking light of exclusion and at the threat of oblivion.

Meli, as clean as the tender early morning wind, dawn flower, gets up, moves to look with her bold face at the path, the river below. You can hear the din of the small cascades and the song of the birds. Meli’s black eyes move from one side to the other, her tongue passes over her lips, she says, How boring the mountain would be if on it we only found the same tree. Fortunately there are a variety of trees, of all shapes and sizes, of every color and texture. A mountain of different trees surpasses any other in beauty. That’s how the world’s languages are. We have a mountain of languages full of variety and color. Linguistic diversity is richer, more tasteful, more desirable, but it requires much care. Your six stories demonstrate a plurality of thought.

Meli, intoxicator of my heart, asks me for the bottle of aguardiente, a candle, and my father’s smoldering incense. She places them with the spiral-bound in front of the small family altar. She gets on her knees. She implores the gods that founded the world, the forming architects, with her hands extended. She asks that the xch’ulel—the soul—of this book not be lost, not get sick, not die. She drinks a sip of aguardiente, she spills another on the altar. She stands up. With the smoke of the perfumed incense around her. She drinks another sip of the pox, then she serves me, another little bit on the lips of the book. Her grandparent’s grandparents were wise, they were only surpassed by the ancestors. She tells me, Your book is in the hands of Jpoxlum, creator of the bats’il winiketik from Oxchuc’s life. It will endure, engraved on the minds of men, beyond the confines of the craggy lands of the Tseltal.