Soundtracking The Elegance of the Hedgehog, by Muriel Barbery 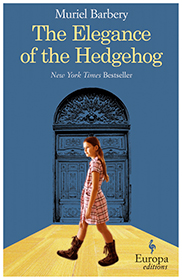 Muriel Barbery’s The Elegance of the Hedgehog, translated by Alison Anderson, is a pairing of two witty, charming protagonists: Renée, a fifty-four-year-old concierge with a plump, lazy cat, and Paloma, an intelligent twelve-year-old manga fan living in the “apartment for rich people” where Renée works. As strangers living in the same building, their relationship is peripheral and distant, but their thoughts and observations about the world around them are closely compatible and astoundingly beautiful. Their new neighbor, Kakuro Ozu, catalyzes the opportunity for Renée and Paloma’s lives to more deeply interconnect, and the impact is lovely and full of possibility.

To complement the interesting harmony between Renée and Paloma, my playlist includes songs that pair rustic with clean, or classical with modern, in a way that shows the unexpected harmony between the obstinate preteen and wistful woman. In the novel and in this playlist, what might be assumed to clash actually intertwines quite interestingly and creates something altogether new and beautiful. These songs carry rhythms and melodies that echo Paloma’s revelation about that “odd moment of beauty, where time is no longer the same.”

1. “The Secret of the Machines,” by Jherek Bischoff, feat. Caetano Veloso & Greg Saunier

Jherek Bischoff’s music (dubbed “pop polymath” by the New York Times) is beautiful and full of layers—he uses a stimulating mix of orchestral instruments paired with unconventional rhythms for a truly modern sound. This particular piece incorporates the adaptation of a Rudyard Kipling poem, giving it an artful layer that I think Renée and Paloma would appreciate, and the effortless way modern and classical intertwine in Bischoff’s music mimics Renée and Paloma’s harmonious camaraderie that ignites in spite of their difference in age.

The song opens with an antiquated, repetitive guitar riff that sounds like it’s playing on a phonograph. The repetition welcomes the listener to sit back and speculate—something Barbery’s two narrators do quite often throughout the novel.  The second half of the song picks up with a youthful beat, vocals, and a silkier audio quality that creates a satisfying pairing of old and new. The lyrics ruminate over the stories behind the “lovers’ names, carved in walls” and read like ponderings that either Renée or Paloma would have entertained.

This cover of Arthur Russell’s “A Little Lost” is sparse and pristine with a kalimba (those cute thumb pianos) and Jens Lekman’s earnest voice as the only instruments. The delicate quality and simplicity of this song fits Renée’s definition of the Japanese word wabi, “an understated form of beauty, a quality of refinement masked by rustic simplicity.” In its smallness, this song played on such a tiny instrument also encapsulates her praise for the “greatness in small things.”

Much of Barbery’s novel occurs through the capacious and ever-eloquent thoughts swirling around in Renée and Paloma’s heads. The open airiness of this recording paired with the many rustic musical textures creates a reflective atmosphere. When Renée encounters the perfect summer rain and the effect it has on the space around her, I could imagine this song playing in the background with the tremolos imitating the raindrops pattering on the window.

This one’s for Paloma and her library of music that she uses to access certain moods: “It is music that helps me to endure . . . well . . . everything there is to endure.” For example, Paloma said she used jazz and Dire Straits to help her to enter into a “sort of faraway mood.” That day before school, her attempt to reach the faraway mood with Glenn Miller’s jazz didn’t quite work, so I’m offering up my favorite jazz pianist, Vince Guaraldi, who performs this piece with Brazilian guitarist Bola Sete.

In the book, Renée and Paloma both reflect on moments of beauty where time slows and expands, where we have “experienced a suspension of time that is the sign of a great illumination.” Caribou’s “Irene” is a gorgeous soundscape that approaches this sensation of time slowing and expanding—notes waver, resonating slowly and overlapping with one another. It allows the listener to absorb the tiniest of subtleties and indulge in the dynamics and intricacies.

Teetering between self-deprecation and confidence, the lyrics in this Tune-Yards song resonate closely with Renée’s weak self-image yet confident intelligence.

The lo-fi recording and simple instrumentation also remind me of what I imagine Renée’s humble apartment to look like; in fact, if this song were a room, I would expect to find a fat, tranquil cat curled up on a chair where the light creeps through the blinds.

During Paloma’s school choir performance, she enjoys this captivating moment where individuals and their struggles disappear “just like that, when the choir begins to sing.” This video is a recording of the Capital Children’s Choir in London performing “Chinese,” by Lily Allen. In Allen’s song the lyrics “I don’t want anything more / Than to see your face when you open the door” evoke the visual of that apartment building and the feeling you get when Kakuro, Renée, or Paloma are knocking on each others’ doors. And I think both Renée and Paloma would enjoy the comical dissonance of a choir so properly singing about getting Chinese take-out and watching TV.

9. “Dinner for Two,” by David Byrne and St. Vincent

Each chapter of Barbery’s novel feels like a deliciously packaged essay on life and beauty. In a similar fashion, the artful peculiarity of David Byrne and St. Vincent’s collaborative album Love This Giant delivers each song as a surprising package of melodies and instrumentation. In particular, “Dinner for Two” had me recalling their neighbor Kakuro Ozu and his eager invitation for Renée to join him in a dinner for two:

There’s something I should tell you,
And I've been waiting so long

When it’s over with, going our separate ways
How about you and me;
Dinner for two.

Bringing this playlist to a close—and giving a nod to Paloma’s classical music encounter at the end of the book (“It was Satie, I think, well, I’m not sure . . .”)—Debussy’s “Rêverie” opens with an entrancingly repetitive theme that might mislead a young or casual listener into briefly mistaking it for Satie. Interestingly, Debussy considered his composition “absolutely no good”—perhaps evaluating himself too harshly, much in the same way Renée does in spite of her wit and intelligence. The song develops gently like a meditation, and somewhere in those piano keys, I think there might be one of those “moments of always within never.”