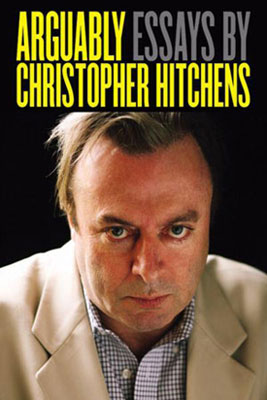 Ordinary book reviewers have three tasks: to determine what the author set out to do; how well that task was accomplished; and whether it was worth undertaking. Here the reviewer is in a way subordinate to the book. Not so reviewers given the space to show their credentials as public intellectuals. In their work, readers often find it difficult to discover just what book is being discussed because the reviewer subsumes the discussion in a wider consideration of the topic.

Christopher Hitchens is preeminently in the second group. He seems to be as widely read and traveled as he is prolific—the publicity sheet for the book notes thatArguably: Essays is his first collection since 2004, not counting the six other books he wrote or co-edited in the meantime. This output is fueled (a word he detests) by consistent and unvarying opinions. Though he has a soft spot for the English Reformation because it destroyed Catholic power, he dislikes all religions in an ascending intensity from Protestantism to Catholicism to Islam.

He is particularly severe on religious elements in the novels of Evelyn Waugh and even more in those of Graham Greene (he refers to the girl in The Heart of the Matter as Scobie's "scrawny and tedious mistress"), giving unqualified praise to the unreligious vision of Anthony Powell, whose clotted and stuffy prose he praises for inexplicable and unexplained reasons. But irreligion is not enough to gain his approval: John Updike's "grueling homework" and Somerset Maugham's utter stylessness are severely criticized, with some justice. George Orwell sits understandably high in his pantheon for his idiosyncratic socialism and for the parallels between Nineteen Eighty-Fourand the English Reformation, and he thinks more highly of Upton Sinclair as a social novelist than he does of Dickens or Zola—a decision hardly based on aesthetic grounds.

His political views are anti-imperialist and anti-totalitarian, and, forced to choose, he would go with the latter. He excoriates practitioners of any form of jihad, and all regimes or individuals from the wet Left who support or excuse it, and almost gushes about the Kurds.

In reviews and essays on political subjects, he can be quite caustic, but he also says that "the people who must never have power are the humorless. To impossible certainties of rectitude they ally tedium and uniformity." To lack of humor one might add the sin of sentimentality. Thus in dealing with quite serious subjects, like the near-collapse of the American economy in 2008, Hitchens compares Hank Paulson's attitude of "prayer and beseechment" to the end of Peter Pan, "where the children are told that, if they don't shout out aloud that they all believe in fairies, then Tinker Bell's gonna fucking die." And the economy very nearly does. He also excoriates "the moist, vapid effusion that greeted the death of Diana Spencer" and the unearned appropriation of grief at the killings at Virginia Tech as "proof of how utterly painless all this vicarious 'pain' really is." And his view of the British royal family can be summed up in "This is what you get when you found a political system on the family values of Henry VIII." But he is equally sharp on the failings of JFK.

Although Hitchens can be snarky, he makes interesting and often valid points, mostly negative, about the weakness of Ezra Pound's "Hugh Selwyn Mauberley," and his analysis of Rebecca West's Black Lamb andGrey Falcon is both pointed and balanced. Even when he condemns, as in his discussion of Waugh, he can see virtues to mitigate faults.

On the (very great) whole, the chief impression one might take from this massive collection is that, given the willingness of outlets like Vanity Fair, the Atlantic, and Slate to publish extended and thoughtful material like this, the condition of American journalism and thought might not be quite as bad as some have feared.