and yet . . . essays by Christopher Hitchens 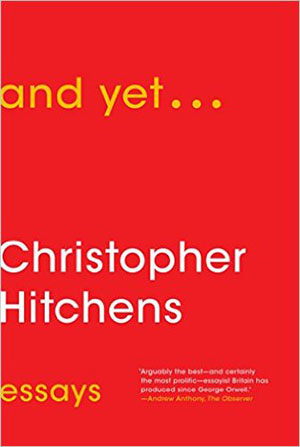 Christopher Hitchens died in December 2011 from cancer, long before publication of four dozen of his previously uncollected essays, all commissioned by some blue-ribbon sources. The lowercase title with open punctuation of this posthumous collection signifies Hitchens’s ability to qualify his polemical arguments, virtually as if he were thinking a new idea on the instant, with utmost celerity and clarity. Devastatingly ironic, vitally analytical, the essays (many of which are book-review articles) create an anthology of pugnacious or mocking rhetorical punishment for assorted subjects: national and international politics, national security, the American Deep South (“where all politics is yokel”), NASCAR events (where God is popularly regarded as “a Republican, with a good chance of being white”), Thanksgiving (of which he approved), Christmas (which he detested), the Fox network, etc. His venom is always potent (especially against the Clintons, Saddam Hussein, and Hezbollah), but history has already come to mock several of his arguments—none so much, perhaps, as his virtually hysterical championing of the second Gulf War, a crime that is most responsible for the current chaos in the Middle East.

To his credit, he did not refrain from self-criticism or self-satire—as his Vanity Fair essays on physical self-improvement show with deadly, hilarious efficacy. His piece on the agonies of Brazilian waxing should be compulsory entertainment for the most serious essayists, while his descriptions of his own ugly physical attributes show that his malice did not spare even himself.

An intellectual omnivore (like Clive James), Hitchens almost matched Orwell in intellectual integrity and independence, while also coming as close as anybody has (to quote his own words on Edmund Wilson) to making “the labour of criticism into an art.”