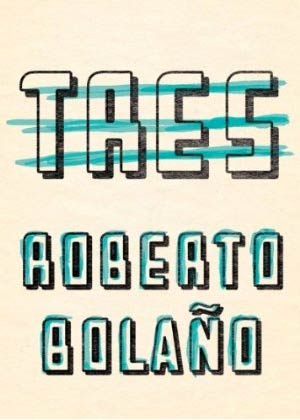 Tres is Bolaño's second book of poems to be published in English. As with his earlier book of poetry, The Romantic Dogs, this volume is also translated by Laura Healy. Also like The Romantic Dogs, New Directions has published this as a bilingual book, which is a treasure for those who read in Spanish, and even those who don't. Healy's translation of Bolaño is remarkable and beautiful, leaving nothing out, yet adding a softness that often goes unappreciated in translated works. Her translation is never heavy-handed, but functions more like a whisper heard faintly above the powerful words of the author. The first lines of his prose poem "Prose from Autumn in Gerona" is proof of her talent: "Una persona—deberia decir una desconocida—que te acaricia, te hace bromas, es dulce contigo y te lleva hasta la orilla de un precipicio." (A woman—I ought to say a stranger—who caresses you, teases you, is sweet with you and brings you to the edge of a precipice.) Healy's translation is subtle and gentle, yet keeps the same intensity as the original.

Tres is divided into three sections: "Prose from Autumn in Gerona," "The Neochileans," and "A Stroll through Literature." The first and third sections are prose poems, while the second is a long poem. In each section, Bolaño's skill as a storyteller comes through in his trademark style. The reader finds himself or herself walking the literary avenues of night as if under the influence of a powerful drug.
"Prose from Autumn in Gerona" reads like a series of snapshots. The narrator, who may or may not be Roberto Bolaño, records impressions as if they were hallucinations and as if he were a protagonist in the text. All of the familiar Bolaño themes are here: unrequited love, poverty, exile, a nightmarish perception of space and time, to name a few. The long poem, "The Neochileans," begins with the image of travel, something essential to the Bolaño oeuvre. Healy's translation of "El viaje comenzó" as "The trip began" is accurate and skillful enough to contain the connotations of a psychedelic acid "trip," which is what a lot of Bolaño's literary work can be compared with. The third and final section, "A Stroll through Literature" begins and ends with the image of a three-year-old Georges Perec appearing to the narrator in a dream. Each of the fifty-seven sections of "A Stroll through Literature" are dreams recounted by the narrator.

Bolaño's talent resides in his ability to transport the reader to the precipice of so many things, not the least of which is a euphoric whirlwind of delight. Tres is a beautiful book that transports the reader in many strange and wonderful ways.