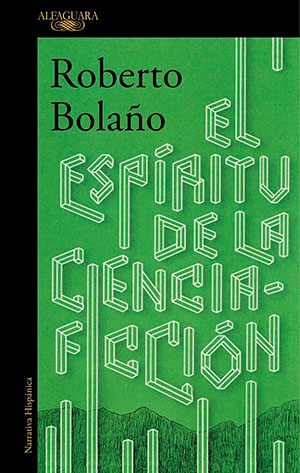 The continuing polemic about this novel’s publication confirms that it hardly matters whether it disappoints professors fretful about pre/ur-texts, or faithful Roberto Bolaño readers fixated on soap operas starring publishers, estates, and serious critics. El espíritu de la ciencia-ficción exposes what occurs when you read an early version of what makes an author unique (i.e., classic Bolaño), writing in 1984 like his future (mainly The Savage Detectives). A third of the way into the novel one reads, “You know? it was like Marlene Dietrich singing Bob Dylan’s ‘Blowing in the Wind,’ something odd, horrifying, but very close, I don’t know how, but close.” Thus, new readers of Bolaño will be amply satisfied and challenged.

Publishers have the prerogative to present posthumous work as new, as do readers to perceive it for what it is. Even so, this prodigious novel casts a pall over others by his contemporaries, just as all of Bolaño’s published prose has. Bitingly brilliant and superior to twists that David Foster Wallace could have envisioned, without academese El espíritu de la ciencia-ficción—which includes an appendix with images of the manuscript and the author’s early notes—shows a superb yet faintly imperfect Bolaño of old, or rather new for first-time readers.

Various genres (epistolary, bildungsroman, poetry, a delirious interview that starts and closes the novel) alternate within the frame of a fragmented detective-esque search. That structure, the presence of the mendicant poet Estrellita, and the Kafkaesque “unknown university” prefigure The Savage Detectives and subsequent narratives. Just in that regard, El espíritu de la ciencia-ficción far surpasses previous posthumous works and the expectations of specialists and fans.

Bolaño left the manuscript finished and decided not to publish it (such was his brilliance and perfectionism), but we should be pleased to have it. As Christopher Domínguez Michael concludes in his magnificently ironic prologue, this novel is more than a gambit for others, and as such Bolaño’s archive is certainly comparable to Pessoa’s trunk.