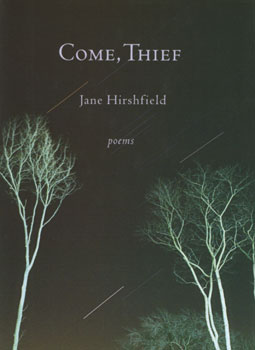 Although the range of material and features of style are essentially that of her earlier work—that is, not developmentally new—Jane Hirshfield’s latest book of poetry nevertheless offers some of her best poems to date. In her best work, what she does quintessentially well is to juxtapose two subjects in a figurative comparison to produce some new insight, some new facet of perception. While this is what every good original metaphor does, Hirshfield seeks especially the feeling of Zen’s zenki (dynamic movement) and satori (awakening), if one may be permitted to speak of satori in degree.

The Buddhist influence on Hirshfield’s poetry may not be news, but it is important to keep it in mind when reading her work. Again, although we find these qualities of metaphorical splendor in nearly every line written by Wallace Stevens, what makes Hirshfield’s work different is the concomitant influence of Zen on voicing, mood, and verbal restraint. Take these lines, for instance, from “The Tongue Says Loneliness”: “As this life is not a gate, but the horse plunging through it. // Not a bell, / but the sound of the bell in the bell-shape, / lashing full strength with the first blow from inside the iron.” We hear here the challenge of a Zen koan, the implicit question that forces us beyond logic. We find also the epigrammatic tendency that is so prevalent in Hirshfield’s work, including the penchant for Zen didacticism. Further, we see her working in one of the four dominant moods or speaker-dispositions of Zen, in this case yugen (a sense of the mystery in things, the mystery of our world).

In fact, throughout this book, we find all of the dominant traditional Zen dispositions or moods, including (in addition to yugen) wabi, an attitude of humility, poverty, or preference for the commonplace; sabi, a feeling of isolation (“good” and “bad”); and aware, a sadness at the fleeting temporality of things and our lives. Though yugen is far more often encountered, here are examples of the other moods: sabi—“Wrong solitude vinegars the soul, / right solitude oils it”; wabi and aware in one image—“Coffee cups, olives, cheeses, [the commonplace] / hunger, sorrow, fears – / these too would certainly vanish, without knowing when.”

Reading Hirshfield, one soon sees that her poetry tends in the direction of the metaphysical. Starting with some observable physical truth, she quickly moves to its metaphysical parallel or application. This quest to the metaphysical can be seen as one of the deeper motivations of her work, the revelatory more often than not her main poetic goal. That said, the downside of this “pointing” is that the didactic tendency sometimes leads to an overuse of declaration, giving some passages a sententious quality. The poems can feel sometimes too much in the grip of a singular, hard drive toward “the lesson,” experience and multiplicity reduced by the “certainty” of assertion. Still, the beauty and stunning originality of this work is not seriously diminished by these instances, and we are left grateful for this book.