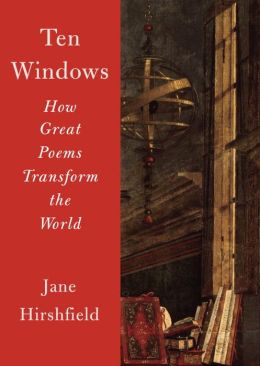 Poet Jane Hirshfield, a passionate advocate and resourceful explicator of poetry, evokes the “mysterious quickening [that] inhabits the depths of any good poem” in this brilliant collection. Her essays ask “How do poems—how does art—work? Under that question, inevitably, is another: How do we?” Admitting that it cannot be answered, she has searched thirty years for ways to approach “a destination whose center cannot ever be mapped or reached.”

All ten essays are probing and insightful, several deeply illuminating. In “Language Wakes up in the Morning,” Hirshfield discusses the etymologies of image and statement, the foundational “modes of attention and their prolific offspring,” then reaches the concept of musing: “no accident, that word used to describe the ways in which thought’s more fluid transformations occur.” She considers the nine muses, interprets “The Stillness of the World Before Bach,” by Lars Gustafsson, and “Music’s self-aware re-orderings,” which “bring experience out of randomness and into the arc of shaping direction,” as it is contrasted “not to silence but to ‘noise.’”

Hirshfield makes a convincing case for the artist’s life not being the source but the servant of a poem. In reading Czesław Miłosz’s “My Faithful Mother Tongue,” she notes that “the Polish language and the condition of exile can be read as addressing also the place of poetry itself in Miłosz’s life.” This becomes more apparent in the long essay on Basho. “When the space between poet and object disappears, Basho taught, the object itself can begin to be fully perceived.” Basho’s mature haiku are like the “fidelity of Zen is to this world and its moment-by-moment expression of things as they are.” Basho’s haiku accomplish a clarity of perception, although the complexities of his imagery suggest several interpretations, until one discovers the naked vision of the poem free of projections.

In “Poetry and the Hidden,” Hirshfield understands how “meaning” hides in metaphor. “Poetry and Uncertainty” is a far-ranging discussion in the context of Keats’s “negative capability”—a sense of doubt that does not depend on reason. Hirshfield cites her translation of Izumi Shikibu’s Japanese tanka from a millennium ago: “Although the wind / blows terribly here, / moonlight / also leaks between the roof planks / of this ruined house,” commenting that “poetry comes into being by the fracture of knowing and sureness—it begins not in understanding but in a willing, undefended meeting with whatever arrives.” Another essay explicates Dickinson’s deceptively simple “We grow accustomed to the dark,” one of the book’s highlights.

Later essays concerning surprise, transformation, and paradox in poetry are equally thoughtful and comprehensive; the book’s effect is progressive and cumulative. Jane Hirshfield’s original excursions take no shortcuts, subtly integrating image, statement, experience, and understanding into lucid, imaginative musings. Most of us were taught to find literal meanings, but Ten Windows reveals fresh awarenesses and modes of reading that transform consciousness.