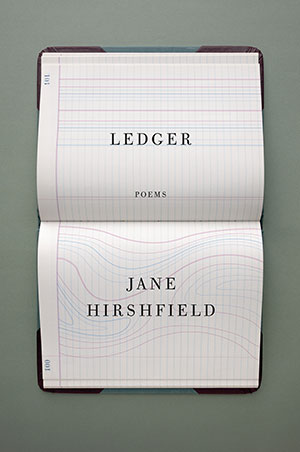 A new volume of poems by acclaimed poet Jane Hirshfield is an event. After reading the poems in Ledger—a capacious, varied volume—it seems as if ordinary life is richer and deeper than before, yet it is hard to pin down why. Her limpid style, sometimes riddling yet never obscure, provides part of the answer. With every word, Hirshfield allows us to enter her poems and feel at home there. Even when she challenges us most forcefully, she does so together with us, holding our gaze, inhabiting a shared space. Not for nothing does she see poetry as a vehicle for transformation—and yet the poetic speaker feels like a friend rather than a guide or moralist. Humility is often her very subject: “In the end, / I was like others. / A person.”

Hirshfield’s poems work against our typical, daily egocentrism. This interest unifies her oeuvre, allowing us to recognize her poems by their perspective and curiously voiceless voice rather than by more conventional means, such as imagery or leitmotifs. A Hirshfield poem is an exercise in opening the self. This is not an evacuation as much as an endless multiplication: until we see each character in a story as us, we will fall prey to the egregious human vices of hatred and prejudice. Such identification can extend to the nonhuman world of objects, animals, and elements. We must be capable of switching between subject and object positions, aware that every object is potentially a subject.

And yet words such as “must” imply command. Hirshfield is not, and does not want to be, a didactic poet. She insists that her poems are often unplanned, and she is “desperate for anything that comes.” This is connected to her Zen Buddhism, which calls for a contemplative practice of what she calls large awareness. In her poems, no activity or object is outside the poet’s view, either because it is too large or too small—the self can travel into all kinds of settings, where it becomes more or less visible. Nor does she wish to write self-consciously Buddhist poems for the like-minded: Hirshfield wants to reach all of us, any of us.

This does not result in abstraction; quite the opposite. Ledger begins boldly: “Let them not say: we did not see it. / We saw.” “Let Them Not Say” is a combative poem for our age of alternative facts, when we may almost have accepted the notion that reality is a matter of interpretation, and all that is solid seems to melt into air. This poet insists it does not, should not, often cannot. Her insistence on the indicative statement hearkens back to the postwar eastern European poetry that has influenced Hirshfield, partly through her long friendship with the Polish poet Czesław Miłosz, as well as to classical China and to Japan, as the presentational style of haiku clearly influences her work. It is tempting to adduce even more influences (for instance, she has recently acknowledged her enormous debt to William Wordsworth). Yet they are woven together to produce a recognizable style—and “style” may indeed be more useful than the much-used “voice” to describe the unifying force of Hirshfield’s poems. Although Ledger is a substantial collection, and several titles seem to promise self-revelation (“My Doubt,” “My Contentment,” “My Hunger”), the poet remains a figure who is embodied yet somehow ungraspable. Even her most particular impressions or emotions seem generalized: “I eat doubting, / work doubting, / go out to a dubious café with skeptical friends” (“My Doubt”). These rare flashes of humor help humanize a speaker who is present and yet so purged of ego as to seem almost empty—if asked to describe her, we may draw a blank. Miłosz, to take an obvious counterexample, writes of doubt within particular contexts (theological, historical, autobiographical, and so on). This poet’s doubt, in contrast, is not situated. It is ubiquitous and yet evanescent—we cannot hold onto particulars of her life-story with which to understand it. It may be our doubt, too, as we are tacitly invited to efface the boundaries of our own selves in order to merge with hers within the space of the poems.

This effect is congruent with Hirshfield’s program of attunement with a world upon which she does not impose. Sometimes a verb is omitted in order to create a statement that is presentational and yet open-ended: “The trunk where the ant.” Sometimes the speaker refuses to elucidate a transition: “And so.” Sometimes the poems, like those of Jorie Graham, contain blank spaces; sometimes they isolate phrases or words much as the imagist poets did. Hirshfield’s favorite device—the sudden shift of perspective—creates a profound defamiliarization that shifts the reader’s mode of identification in a way that often compels ethical reflection. This makes us all come closer to the selflessness she believes to be intimately linked with compassion.

No singular technique dominates the volume. There is a constant focus upon what is said and unsaid, what can be rationalized and what cannot, yet the poems open a space for thought rather than providing its explication. Much depends on what her readers do when confronted with a poem’s ending: this is where her paradoxes are completed, as the reader is left to ponder or resolve what may be ineffable. The way the mind works upon the world interests Hirshfield as much as the world’s textures; she is a metaphysical poet of thinking even more than a poet of the senses.

Yet there can be no thinking or perception without a thinking, perceiving mind, and Hirshfield knows that a truly selfless poetry is a theoretical fantasy with no possible embodiment. This is the ultimate paradox of an oeuvre that keeps offering more and challenging further. The value of such work is beyond question.