The Beauty by Jane Hirshfield 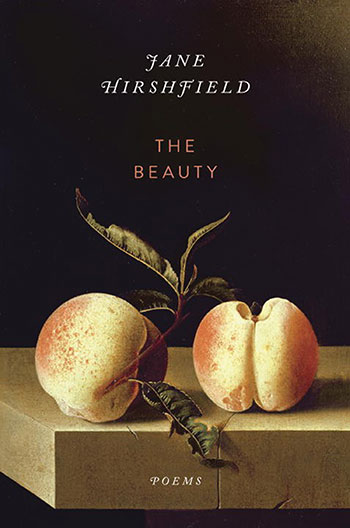 Jane Hirshfield’s new poems emerge as fiercely strong yet tender, drawing on supple intuition and clarifying intelligence to evoke the richness of her authentic inner life. Hirshfield sees beyond self, perceiving fresh perspectives flowing through our permeability and interconnection. Her intense alertness to the subtle music of poetry articulates the site of silence, becoming a flashpoint for intimate spirituality.

The Beauty contains lovely hymns for the aging body and astonishing strophes of being. These reflections in solitude are not mere texts of aloneness, and, even though personal, the poems never parade the egocentric details of some “confessional” poets. Instead, she is “Like a cello / forgiving one note as it goes, / then another.”

In “A Cottony Fate”—a complete meditation in three couplets—Hirshfield writes, “Long ago, someone / told me: avoid or. // It troubles the mind / as a held-out piece of meat disturbs a dog. // Now I too am sixty. // There was no other life.” In the last poem (“Like Two Negative Numbers Multiplied by Rain”), she approaches the conundrum of “Yes, No, Or / —a day, a life, slips through them, / taking off the third skin, / taking off the fourth. // The logic of shoes becomes at last simple, / an animal question, scuffing. // Old shoes, old roads— / the questions keep being new ones. / Like two negative numbers multiplied by rain / into oranges and olives.”

This final equation could be a Zen koan, entirely metaphorical despite the simile, its intuitive wisdom hidden from explanation. In a PBS interview with Bill Moyers, Hirshfield says she did not write while living for three years in a Zen monastery. Many reviewers have noticed the Buddhist focus. Yet “I’ve always feel a slight dismay if I’m called a ‘Zen’ poet. I am not. I am a human poet, that’s all.” Neither are the poems political rants nor romanticized odes to nature, although her compassion reaches out to all, acknowledging the preciousness, uncertainty, and brevity of life.

Hirshfield’s declaration of being “a human poet”—and certainly one with a distinctive voice and an honest vision—suffices. Her humanity includes self-criticism, genuine humility, and a penetrating interest in the sciences. Her discreet questions, immersed in moments of inspired creation, are suspended on grace notes of memory. Jane Hirshfield stands with the finest contemporary American poets. The Beauty reveals a poetics of being that inhabits mysteries, essences, and beautiful lyrics. In her books of prizewinning poetry, translations, and essays, one realizes that her works are apertures into wisdom. [Editorial note: Turn to page 126 to read a review of Ten Windows, her latest essay collection.]