Closer to Where You Will Find Him 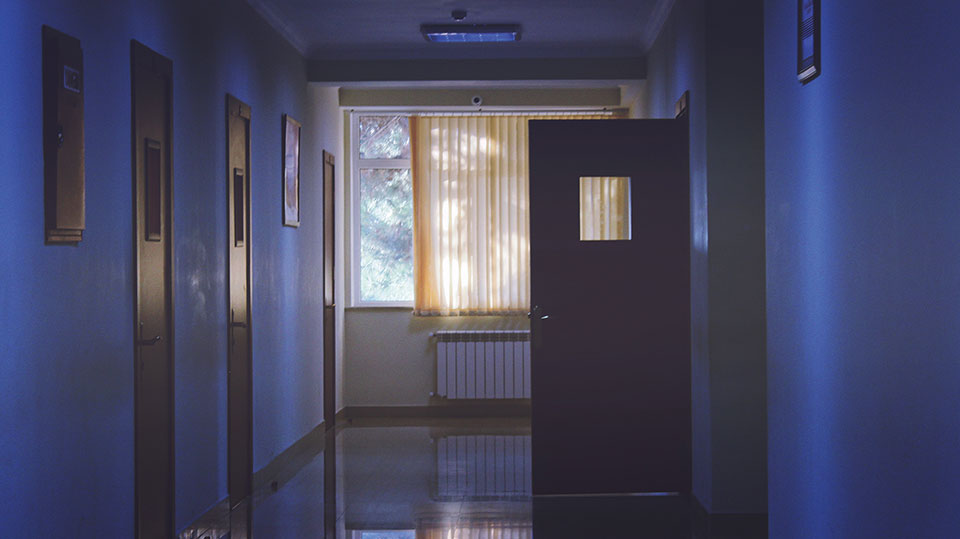 What I see upon entering a hospital room in St. Paul at dawn.

My nieces asleep, one on a cot against the wall, the other in a chair beside the bed, holding my sister’s hand. Paula lies on her side, mouth agape, tubes threaded up her nose, slow-churning whatever air she can. Her eyes are closed, her face sallow in the dim light. Her body trembles along its length, as though tracing graph lines on the monitor.

Jenny, the one holding her hand, becomes aware of my presence, offers me a hollow-eyed acknowledgment. I last saw her a year ago at a wedding in Australia and not for several years before that. Foal-like child. Aloof teenager. Discerning, complaisant adult. Now exhausted deathbed sentry. Everything missed in-between.

I do not immediately go to Paula’s side, though nothing obstructs my path. Though I have not seen her since our father’s funeral. Though we’ve barely spoken in the intervening time. Death is its own invention with its own effect and its own observances. You regard the failing body. The body is the vessel. Death is the darkness that fills the vessel. Your mind dips and turns, dips and turns. Measuring the depth. Sensing its contours.

Death is its own invention with its own effect and its own observances. You regard the failing body. The body is the vessel.

Childhood images begin to spark. Paula in a leotard prancing through a recital. Laughing wildly on a carnival ride. Slouching next to her prom date, ever the rueful sunflower. Slyly sharing a joint with me, the older of her little brothers, while home on college break. The gaps in time happen anyway. We erase as we go.

The pronounced tremor, I am made aware, is pain. Vast, immersive pain. Rather, what is left of pain when only nerve fibers are there to manage it, for Paula’s mind now drifts the shoreless opiate seas.

In time I approach and tell her I’m here.

When our mother arrives in late morning.

She must relent at first in what remains of her disbelief. We thought we had more time. Months, at least. And then an infection, flaring through her body, gelling her organs, delaminating her flesh.

The story is an often told one. Enter realm of care, leave shattered or not at all. The margin of error becomes the tolerance of error. Intervention blends to contravention. Process arrives at an end-process, bereft and irreparable.

Of steps taken, or not taken, none are malign; none imprecise. Competence rules. Compassion is everywhere. Yet here we gather, the story is now our own, not for the first time and not for the last. The sum of industry resists the sum of perfection. Outcomes are stochastic.

Our mother draws on her reserves, but she is old and weary. She is a widow. She has maladies. Has had her own brushes with mortality. More than her fill of heartbreak. She suffers as she joins herself to this task. She tells Paula, It’s okay now, Mom is here. And she sits and holds her hand, strokes her swollen arm, reassures her.

Beth, the sibling between us, calls from Sydney International. I tell her she won’t make it in time. She says she understands, but understanding is not acceptance. Ah, my far-flung family. Sprawled across time zones and international datelines. Red-eye from Seattle. Commuter from Philly. Transcontinental from the Southern Hemisphere. Death is the indivisible prime of earthly distance. Paula will travel farthest and alone.

A doctor walks into the room.

A doctor who has never truly been her doctor. A gatekeeper doctor. An escort to her final loge seat. When he—when they—discovered the damage already done, I’ve been told, saw the futility, explained to her the swift and certain result, said that cutting would guarantee agony, not time, she called to her husband and daughters. Leveled a finger. Said, I am not having surgery. Emphasized am not. Briskly told them she loved them and to stay loyal to one another. Allowed them a short cry. Then calmly floated away to her deep subconscious. She could, at that point, still command the morphine pump.

Her cancer, one imagines, skulked off in a rage, deprived of wreaking its prolonged havoc. It too will be killed by the infection.

At a glance the doctor takes in the scene. He ignores Paula, already a plank. Singles out the mother, especially, and the savvy older daughter, herself a medical professional. He asks. Listens. Soothes. Ingratiates. Frowns and purses deeply, impeccably. With a maestro’s timing.

He is better at this than most. Has made the investment. Visibly tries to feel, to connect to something inside himself. The effort is ennobling.

Our mother, who is fluent in the tongue of palliative care and impending death, who has ushered out a husband, a brother, parents and parents-in-law, aunts and uncles and cousins, countless friends, and soon a child, revels for a while in the strange comfort of this theater. She is, in this way, his muse. The one on whom he can ply his empathy, note perfect and letter sharp.

I judge, yet there is sanctification in this. Skepticism at such times is mostly deserving of itself. We too are the temporarily living.

Followed hours later by a rabbi.

It is not clear what alerted him. Perhaps a comment to the hospital chaplain or an entry on a form electronically routed. The information economy, slicing away inefficiency. Seller buttonholes buyer on a frictionless spiritual plane.

With a few deft exchanges he gauges his surroundings and modulates his fervor, an old hand in finding his way through the tribal strata. There are no unclassified Jews.

He gathers our humble congregation around the bed. A brief service ensues, a faintly doctrinal mélange of folk sentiment and mild exhortation. Only the codas are in Hebrew.

Each of us then takes a turn addressing Paula. Lyle, the husband, the gentile, the evangelical, outflanks us all with his kneeling piety. More Jew than the Jews.

God is a taker, it seems, if he is anything at all. Our prayers. Our tithes. Our time. Our parents. Our sisters. Our well-being, bit by bit. Our past and our future. If we do come to know him, this is how we know him best. And how we’ll know him last.

God is a taker, it seems, if he is anything at all. Our prayers. Our tithes. Our time. Our parents. Our sisters. Our well-being, bit by bit.

Still, we offer praise. Which calls into question the praise we bestow on anything.

I have almost a day to wait. They won’t move up my flight. I begged them. I cried. I made a scene.

She’s not going to last, I tell her. And it will be a crime if she does.

Or will it, I wonder, though only to myself. If Paula knows anything, she knows her sister is coming. That she’s destroying herself to get here. That she’ll be inconsolable if she arrives after it has ceased to matter. At what point does misery spared defer to misery endured. And is that all we are waiting for.

The crime would be her own. The punishment unholy.

I move up beside her, slide my hand along her arm, whisper close to her ear. Tell her Beth is on her way. That she is delayed in Hawaii. It could be another day.

The plain facts she is owed. Their receipt is far from assured.

As it happens, we are alone. Lyle has dashed home to let the dog out. Jenny to her apartment to shower and change. My mother and Kate to find the cafeteria.

I stand near Paula and consider. Discrete noises slip in from the hallway. Slow shuffle of terry slippers. Snap of a sanitary glove. Out-of-true casters on a nearby hospitality cart. Monotone summons over the intercom. It comes to me, in time, what to say, and I lean in and call to her, PJ, it’s just the two of us, try talking with me now. I say this only once but say it clearly. Authoritatively.

Only our father called her PJ. Paula Judith, the first of the motley four. Always Daddy’s girl. Always worshipped and always worshipful. Paula alone was never struck. A relationship apart in our family.

Only our father called her PJ. Paula Judith, the first of the motley four. Always Daddy’s girl. Always worshipped and always worshipful.

Paula shudders, opens her eyes. They are afire with yearning, fear, incomprehension. Or maybe just pain. Her being called momentarily to its throne. I attempt to commandeer her gaze, to lock it in with my own. But it whirls in panicked circles, searching only for totality. The fine details no longer provide answers. Seconds pass and then oblivion retrieves her.

Ah, I am so selfish. That was all for me. Her hoping it was our father wouldn’t have meant she’s still here, still among us. Only that she’s closer to where she expects to find him.

For a few wakeful hours.

We check into a hotel so my mother can rest. A feeder hotel, of the kind that lives off its conspicuous host, in this case the hospital. Then back to our vigil through the frozen predawn. Again Jenny is at her mother’s side. Kate has the cot. Lyle snoozes in a padded vinyl chair.

Change, so often, is the realization that change has occurred. That inches have been added. Maturation undergone. Knowledge gained. Independence won. So it is with my nieces. We miss so much.

For the dying, an hour is a year. A day a lifetime. Each breath of Paula’s is now a smashing encore performance. A stupendous, cartwheeling feat. The moments between are bated and interminable.

There are, at present, four siblings. One lies prostrate in this room. One, currently en route, has a tumor wrapped around her pituitary gland. Another, at home recuperating, just had part of his colon removed. Yet another—that would be me—has an exotic, smoldering leukemia. Centuries of Ashkenazi inbreeding.

Paula broke the chain first, then I found an Episcopalian of my own. A peculiar link in a brother-sister relationship with too few of them remaining. Genetic diversity wasn’t our objective, but I wonder about my nieces, my teenage children, and hope it will be our legacy.

So little to say about this day.

Beth is inbound from Phoenix, futilely. Exhaustion and torpor exert their own gravity. Time is honey from a wooden spoon.

At some point Jenny rouses me from a dreamless sleep in a hallway chair. Paula is gone.

We do embrace and cry, all of us, even I. In the choir now of others who have anointed this dismal place.

I should save the last note here for misery, both spared and endured, how in the end it becomes a single thing, itself. But there is another thought in my head. A message of a kind. You decide if these are the words of a skeptic.

All our lives we accumulate ghosts, and for a while that is what we become. So look now. Look where you expect to find him. It can’t hurt to try. He just might be there. 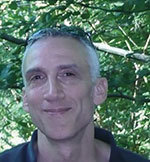 Michael Mattes’s stories have been published in the Santa Monica Review, Northwest Review, and West Branch, among others.