Hearth: A Global Conversation on Community, Identity, and Place 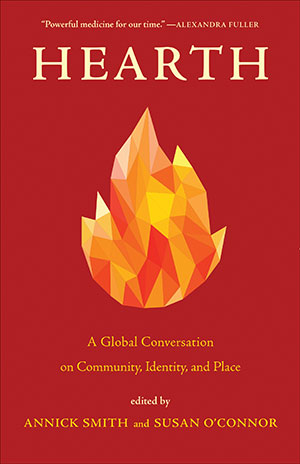 Hearth: A Global Conversation on Community, Identity, and Place

In many of the essays and poems in this remarkable new collection, the idea of the hearth is often defined by its opposite: in 2018 it’s difficult not to feel engulfed by traumas at the psychological, social, political, climactic, and global scales. In a stark reckoning by Gretel Ehrlich on the “culture of abuse and untruth” in which we live, she questions whether—in the face of cultural and biological worlds disappearing “with no hope of return”—the concept of home and hearth might not be a “cruel joke.” And in an era marked by “a sixth biological extinction, economic violence, and social disintegration,” Barry Lopez wonders where we might find our spiritual footing. “What is the hearth of the Anthropocene?” he writes. “What, now, is the symbol of our allegiance and our concern for one another’s fate?”

For Lopez, the fire that he builds out of arctic willow twigs burns with a primordial centering effect for those who gather around it, a stay against the “outer dark” just beyond the edge of their encampment. Many of the other contributors to Hearth seek a “rooted relatedness” to something larger than the self (Carl Safina), a sense of becoming in “deep time” (Mary Evelyn Tucker), or alternative “narrative mappings” (Boey Kim Cheng). Scottish essayist Zoë Strachan, writing about the “numinous” quotidian found in archaeological digs that reveal both death chambers as well as the ancient domestic activities of keeping warm, cooking, and storytelling around hearths, contends: “We all want a center, a lodestone, a connection to the past that will write us into the narrative that leads to the future.”

Repairing trauma is a frequent theme throughout the book. Geffrey Davis finds consolation in fishing and writing, Andrew Lam mourns the “lost enchantment” of his native Vietnam, and Debra Magpie Earling witnesses her father save himself—and his family—from violence even though his own life is predicated on violence. Yvonne Owuor accepts the “dreadful gift . . . of seeing the world as it is and then being asked to love it.” And Australian poet Mark Tredinnick writes movingly of succumbing to depression in midlife, leaving him bereft of family, “unhearthed” and “unhoused.” Turning to poetry as a way of “piecing” together his mind again, Tredinnick rediscovers his “miraculous part in the larger scheme of things” and fashions a new hearth to replace the one he lost. “In a good poem,” he writes, “some of the integrity of the cosmos coheres in us, notwithstanding the turmoil in our heads.”

“We live within a blaze of transience both inevitable and complete,” writes Jane Hirshfield. Hearth captures both the evanescence of that blaze and its enduring power to heal us.