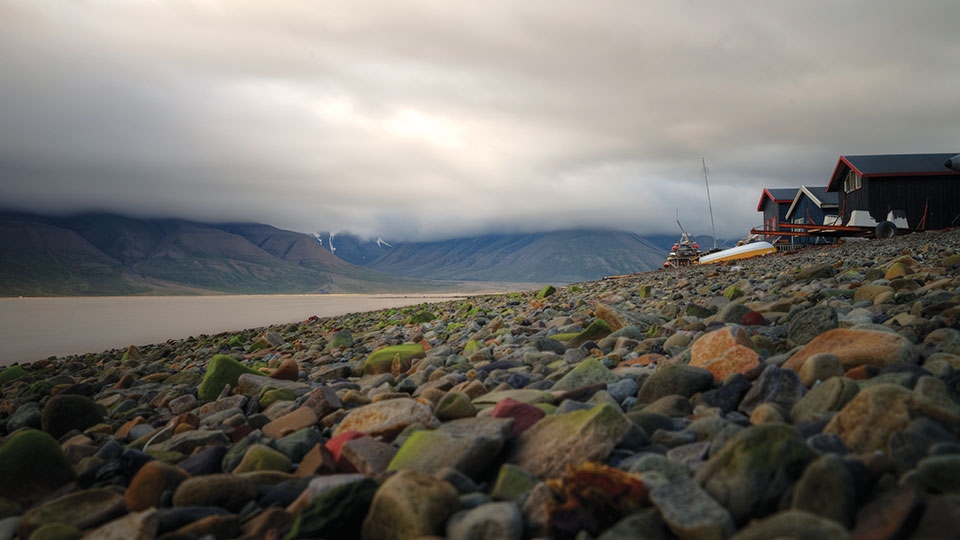 A YEAR AGO I TOOK A TRIP to Svalbard, the nearest inhabited archipelago to the North Pole. I was there to work with the Libyan poet Ashur Etwebi who, on an artist’s residency, had somehow managed to get me on the ticket. We were together for just over a week in the twenty-four-hour white light of Longyearbyen, a small coal-mining town on Spitsbergen Island, Norwegian territory. Dense glaciers in the near distance and not a single tree to be found. When we wanted to walk off-road, Emma—an Australian from Artica, the organization who had invited us both—took us into the mountains with a shotgun slung over her shoulder. Though it was summer, the weather was cold when the sun wasn’t out. 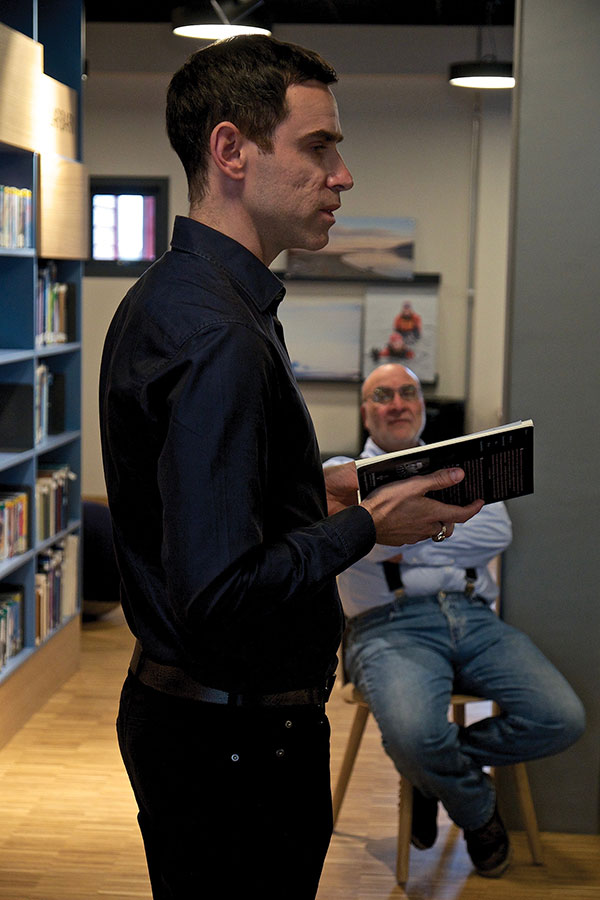 James Byrne performing a reading
with Ashur Etwebi in Svalbard

We worked tirelessly, only breaking for food or drink, translating about half a book of Ashur’s poems, a couple of which are included in this issue. Ashur wrote new poems, sometimes painted, cooked us excellent suppers. At night we would often open a bottle of something strong and talk about Libya and his house in a village near Tripoli, which a militia burned down a few years before, forcing him to seek political asylum. Ashur eventually settled in Trondheim, Norway. The Norwegian literati talk to him at public events, such as readings, but might ignore him the next day in the market. Ashur is alone. Most of his family are still living in Libya, moving around precariously, sometimes from house to house, just to stay alive. Ashur would love to go back but knows he would be risking, not just his own life, but the lives of those dearest to him. He shows me photographs of the house before and after the militia torched it. “This is going to be rebuilt one day,” he assures me. Sometimes the memories of what has already been lost seem too much to bear. We drain the cognac, work again the next morning.

Ashur and I first met at a poetry festival in Syria in 2009 and became quick friends. We met again a couple of years after this when both he and Khaled Mattawa—the most notable Libyan poets alive today—invited me to participate in Tripoli’s first international literary festival post-Gaddafi. Given the current politicos in both countries, these festivals have now folded, and, like the Syrians who organized the Al-Sendian festival in Mallajah, Ashur became a target for those who feel internationalism represents collusion with the West. At the time I met Ashur in Syria, I hadn’t realized what a major literary figure he is. Given his prolific output and his range as a writer—but also with consideration to what has uprooted him to Norway—it would be reductive to label him a “political poet.”

Ashur is the survivor of a traumatic experience echoing on, and sometimes these echoes reverberate through the poems. Quite often the effect of this is subtle (poetry is “bubbles floating from the fins of a fish”), other times more direct (the blue morning carries “bullets of ignorant militias”). Ashur’s is an open and inquiring poetics; meditative, lush with metaphor and imagery. As Celan commanded it to be, the basic gesture in each of his poems is a handshake, a correspondence with the world.

Editor’s note: Read two of Byrne’s co-translations with the author from this same issue.