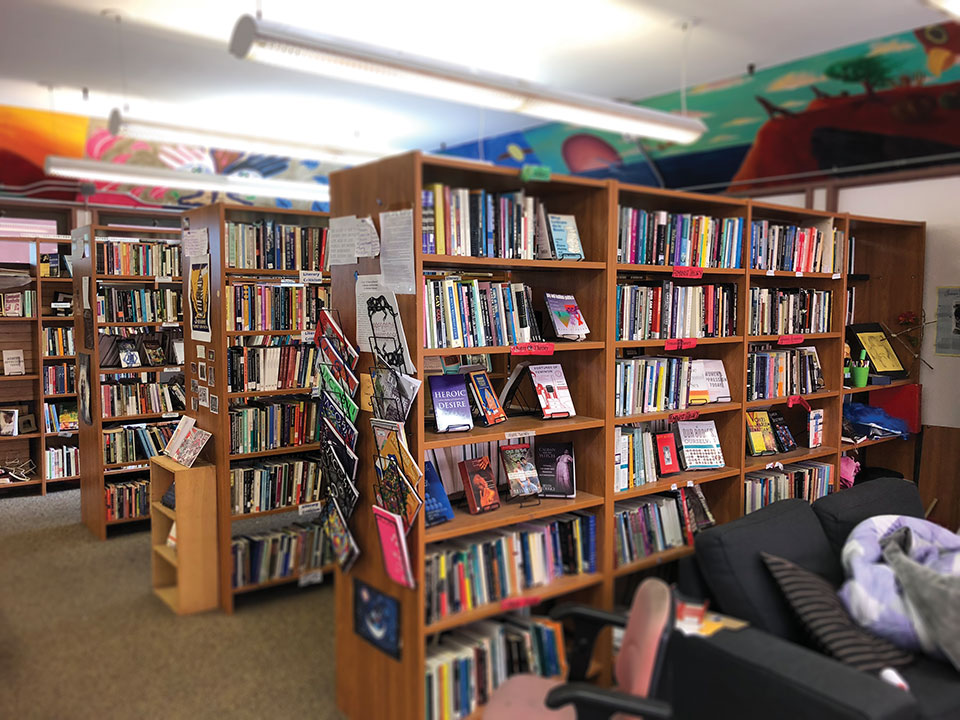 WHEN THINKING OF San Diego, most people imagine palm trees, sand, and ocean breeze. Over thirty-five million tourists visit the city each year, and most come for the beachside relaxation and natural beauty that have made it world-famous. Lying just under the surface of this picturesque vacation destination, however, is a lively community of social and political activism. One prominent example of this culture is present in Groundwork Books.

Located far from San Diego’s tourist-centric areas, Groundwork Books makes its home in a student area on the University of California’s San Diego campus. It is a workers’ cooperative run entirely by volunteers, consisting of both students and citizens from the nearby areas. With its commitment to community outreach and affordable material, Groundwork Books aims to take emphasis away from the business side of bookstores and place it back on books and the people who read them.

According to its website, the store “serves as meeting space, social space, and infoshop for San Diego’s progressive, radical, and socialist community” and “provide[s] books at community events, political rallies, and punk rock shows.” At Groundwork Books, this dedication to public activism and involvement is observable even from outside the store. The front windows feature taped flyers and painted announcements offering public activities, including a movie night as well as insightful essays and articles on topics such as the military-industrial complex.

Once inside, the unique philosophies of Groundwork Books are evident in the distinct style of the store. Unlike most bookstores, which standardize their layout and keep their image as neat as possible, Groundwork Books has a lived-in aesthetic. Many books sit on the shelves at odd angles, and there are boxes filled with flyers and magazines in several corners. At first glance, it looks more like a public library than a bookstore. While this lack of polish may seem like a negative aspect to some, it shows that Groundwork Books is a resource that exists to be used, not simply looked at. The books aren’t perfectly aligned because people have been reading them, and there are boxes of flyers and magazines because people have been distributing them. The store is aware of this homey appearance and embraces it, as shown by the painted ceiling areas, posters featuring multicultural art and messages, and blackboards filled with chalked quotes from important works.

Groundwork Books also goes above and beyond simply selling reading material, often bringing its mantra of community activism out of the store and into the broader world. One of the best examples of this community engagement and charitable work is shown in its affiliated nonprofit known as “Books for Prisoners.” This outreach program is focused on ensuring that inmates in the US prison system are able to educate themselves and utilize their time behind bars to the fullest potential. The organization collects donated books and sends them to prisoners all over the country, allowing them to request the titles that they want most. This process is a two-way street, as prisoners often respond with letters and artwork of their own. By keeping this avenue of dialogue open, Books for Prisoners hopes to bring attention to aspects of the American prison system that need reform.

Groundwork Books is a wonderful space to explore a type of literary culture that you won’t find at the average bookstore. It offers reading material for anyone interested in left-leaning political and social movements and is a great starting point for local activism and discussion. If you ever find yourself in San Diego with some spare time and the desire to broaden your horizons, Groundwork Books comes highly recommended.

Tyler McElroy graduated from the University of Oklahoma with a degree in English in 2019. He enjoys reading, listening to music, and writing in his spare time. He intends to make a career out of his love for the written word and is usually busy planning his next big adventure.