I come from Xamayca, the land of wood and water. This was the name bestowed by the Taino who were among those that “Don C. and the Goldman Posse” first encountered on their voyage to the island we now call Jamaica.[1] Like Edwidge Danticat, I am a Caribbean immigrant to these United States. After pits and stops in various places I landed in Oklahoma. My first encounter with Danticat’s writing was in graduate school when her novel Breath, Eyes, Memory was published. I remember being touched by the power of her voice, her use of words—the images conjured by her pen. They fit into a tradition of Black women writers who cast nets of influence, weaving webs of connection between daughters—protected and elevated—and the sacrifices of mothers, sisters, uncles, fathers, aunts, and generations of women.

In Oklahoma, at the state’s flagship university, I was culturally lonely. There was a coterie of Black academics, one that dwindled over time, but few Caribbeans. Edward Kamau Brathwaite received the Neustadt Prize long before my time. Several of the jurors over the years such as Paule Marshall, Lorna Goodison, and Mervyn Morris had been Caribbean writers. When Danticat was selected, the executive director of WLT, Robert Con Davis-Undiano, invited me and Haitian American artist Marie Casimir to assist with planning the festival as well as to co-teach a class on Danticat’s work.

The process of exploration led two Caribbean daughters to open and share boxes locked tight in the heart from the turbulent immigration years.

Marie and I met on our own to ponder and plan. The process of exploration led two Caribbean daughters to open and share boxes locked tight in the heart from the turbulent immigration years. The tears, laughter, and pangs of our female migration stories, rarely pondered aloud, had pain inscribed in the memories that no one had ever asked us to disclose—not even family. We recognized, in each other’s narratives, energetic losses stored in the body; for me that included fibroids and quietly repressed anxiety. We broke bread and swam through layers of old feelings in order to clear the space in our heads to teach the class requested. What emerged as a centerpiece was the idea of creating dangerously—a theme that was central to one of Danticat’s collections.

The essay “Create Dangerously: The Immigrant Artist at Work” retold the famous story of the executions, under Papa Doc’s regime, of Marcel Nouma and Louis Drouin, twenty- and thirtysomething young men, respectively, both middle class and educated, who left the comforts of the United States to be part of a guerilla war “that they hoped would eventually topple the Duvalier dictatorship.”[2] In the essay Danticat discussed the political danger of reading and performing plays that were considered radical by the regime. Yet despite repression and the constant threat of death, people still read and wrote and created.

In the class that Marie and I taught, our goal was to introduce students to the radical history of Haiti, read work by Edwidge Danticat, and then have them engage with the idea of “creating dangerously.” We thought applying this concept from Danticat’s writings would enable them to understand the ideas behind Michael Merriam’s essay “Haitian Literature as a Model for World Literature” (another piece they read) by actively using Danticat’s ideas to think through and critically develop their own worldview. Creating dangerously was therefore the theme of one of their projects, and they were required to utilize artistic approaches to conceptualize and produce it.

The culturally diverse class was comprised of an African American woman, a continental African man, three women of mixed race, four European American students, and two Chicano students. Their assignment prompt was to simply “create dangerously” around an issue of their choosing. The projects were rich, ranging from documentary film and collage to paintings, poetry, and music. The themes ranged from DACA to disability; powerlessness, silence, and resistance in relation to female identity; censorship and reproductive rights; as well as in-group racial and cultural oppression.

We noticed that the white students struggled to figure out what creating dangerously meant for them, while many of the students of color seemed to harbor anxiety about speaking openly, even through artistic mediums, about issues that represented real danger to them. It also became clear, however, that for the white students, the issue was not so much that they were incapable of imagining issues of danger around which they could create, but rather that they did not feel free to criticize their democracy in any strong way. One student mentioned harboring significant anxiety about using OU email to transfer a copy of the file of her artwork since it contained a strong even if symbolic critique of nationally prominent corporate lobbyists. The student reactions spoke volumes about the world they inhabit. What did it mean that in the most powerful country in the Western hemisphere, a land where more immigrants risked life and limb to migrate everyday, that relatively privileged citizens, generationally naturalized, were afraid to create dangerously even on this university campus?

At the Neustadt Festival, Edwidge Danticat listened to a panel in which historian Marcia Chatelain, artist Florine Démosthène, and I talked. Keeping the theme “creating dangerously” in mind, I asked the panelists what their views were of the kind of bravery that will be required of students in the future given the current state of, not Haiti, but the US. Marcia spoke in particular about coming from a family whose excessive caution she did not understand as a child, but the current political climate had given her deeper comprehension of their perspective. She also spoke about the courage to stand up for what is right as something that was also passed down to her. She sees this as the thing that current and future generations of students definitely need now.

The notion of standing up for one’s principles even if you are alone was a deep part of my socialization.

I identify with Marcia’s sentiments. According to my mother, my father, when he was a Caribbean Methodist minister, was famous for his “one-man reports” at Synod, the annual conference. He would often go on record as the only dissenting voice on an issue. The notion of standing up for one’s principles even if you are alone was a deep part of my socialization. I don’t always practice this, but it is embedded in my emotional psyche. I ended my Caribbean literature graduate seminar this semester with Bob Marley’s album Survival. Some students asked what he meant by his references to revolution. Was he speaking about an organized movement similar to the one attempted by Drouin and Nouma in Duvalier’s Haiti? I responded by saying that while the anti-establishment sentiment of Marley’s music was real, his gift to me and the world, along with artists like Peter Tosh, was an ideology of resistance that encourages us to have an internal sense of justice, not exclusively premised on the rule of law, since at one time or another slavery and other atrocities were legal in certain nation-states.

Revolution means creating dangerously as Marley did, even when there’s backlash. It means, most importantly for a younger generation, not giving up even if you cannot win the fight in front of you. This is the best of the legacy that enslaved Africans have given to their descendants—the sensibility that if you give up when you can’t see how you will win, instead of preserving your energy, you lose your spirit. Create dangerously.

[1] Jamaican poet Lorna Goodison, in her poem “Don C and the Goldman Posse” from her collection Controlling the Silver, satirizes Columbus’s arrival in Jamaica and his encounters there. 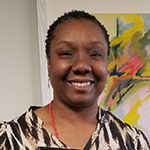 Catherine John is an associate professor of African American and Caribbean literature in OU’s English Department. Dr. John is the author of Clear Word and Third Sight: Folk Groundings and Diasporic Consciousness in African Caribbean Writing (Duke Press & UWI Press). She is also finishing up the book Diasporic Orisa: A Philosophy of Grassroots Cultural Practice and beginning work on Cyril George Bailey: The Memoir of Stationmaster and the Genealogy of a Family. She has published in film studies, gender studies, hip-hop, and classroom pedagogy. She has received three teaching awards: the Irene Rothbaum Award (2004), the Good Teaching Award (2012), and the General Education Teaching Award (2018).