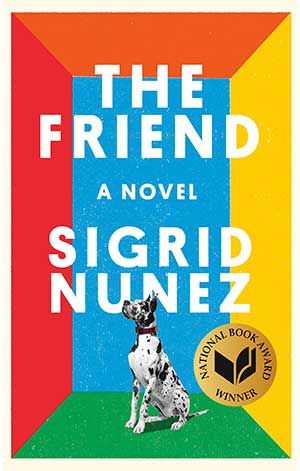 o the books we need find us? A few months ago, I purchased a used copy of Sigrid Nunez’s seventh novel, The Friend. The inside jacket promised “a moving story of love, friendship, grief, healing, and the magical bond between a woman and her dog.” Having just lost our beloved dog, Wrigley, and deep in grief, I was both drawn to this dog-centric novel with its beautiful cover and a little afraid to read it.

The premise appears straightforward: a woman who lives in a five-hundred-square-foot pet-unfriendly apartment has lost her friend and literary mentor, and now someone must take his dog. Naturally, the dog is a Great Dane; the woman, a self-described “cat person.” While this sounds like the perfect plot for the farce that will be next week’s sentimental television movie, the novel, fortunately, isn’t that at all. Instead, The Friend is the experience of dwelling in near solitude with the woman and the dog in their shared grief while the woman addresses her thoughts to her deceased friend.

Because Nunez chose a narrator who is a writer and professor, those thoughts naturally intersect with teaching, writing as vocation, and literature as she’s working through her grief and considering the relationship between human and canine. For example, her thoughts in one place bring together Martin Amis, Edna O’Brien, Svetlana Alexievich, and Doris Lessing and, in another, move from Flannery O’Connor to Simone Weil and ask, “Who were these people?” Nunez’s intelligent narrator roams effortlessly and unpretentiously from Abraham Lincoln to Lady Gaga to an observation tying together Wittgenstein, Kafka, and George Bailey.

Making excellent use of short sentences and short paragraphs throughout, the novel sometimes reads like journal entries—notes from a trip to a bookstore, a visit to the eye doctor, an academic joke that’s making the rounds. At other points, the narrative slows as we watch human and canine coming to understand one another (with a little help from Rilke and Knausgaard) in moments those who have thoughtfully lived with dogs understand but Nunez’s narrator eventually expresses so well by applying Rilke’s definition of love: “What are we, Apollo and I, if not two solitudes that protect and border and greet each other?”

Though previously owned, the book was in perfect condition. Its prior reader, however, did leave one mark of having been there, a yellow sticky note at page 181: “I had absolutely no idea that the narrative was going to take this twist until I got here. It felt like a risk worth taking.” Apparently so. The Friend won the National Book Award for fiction last year.