In her latest collection of essays, The Art of Death: Writing the Final Story, Edwidge Danticat writes: “My mother did not leave behind an obituary, but she left behind her cassette. ‘I love you okay’ is all she says in English, even after having lived in the United States for over forty years. The rest of her cassette is in Haitian Creole. And to me, she keeps saying, ‘Met fanm sou ou.’ ‘Be your own woman’; ‘Be a strong woman.’”

My own mother, Mona, and I were separated when I was four but were reunited a year later when my father brought my older sister and me to the US from Haiti, leaving my three brothers in the care of family. A few months prior to reading the Art of Death for the first time, I was forced to realize that my mother is in fact, closer to death than birth. My mother and father are always threatening to die—any day now.

“You should hurry up and have children so they will know us.”

“Who will care for the house in Haiti, the land?”

This is not maudlin; it is the Haitian way. Death is certain and we must not crumble under the anticipation. Still, I usually laugh it off and warn them about planning an early death.

I am sitting at the edge of my mother’s hospital bed, hunched over with my head at her feet, shivering from the blasting AC in the south Florida emergency room. It’s the middle of the night, somewhere in the neighborhood of 1am, and we are waiting for a nurse to check on her—it is becoming clear she will not make her 6am flight back to Haiti. Our evening began at Urgent Care, and now, in the ER after two hours of waiting, my mother (who hardly ever complains) is moaning from sharp abdominal pain, occasionally gripping a fistful of the sheet. This is a woman who has given birth six times and reminds me often that I almost killed her when I was ready to meet the world. I am confident she knows how to manage pain, but she’s in her sixties now and everything aches and is shifting—earlier than I expected, perhaps earlier than she expected, so my stomach feels heavy.

When the nurse finally appears from behind the curtain, he greets her: “How are you doing, manmi? You have pain?”

“Mmm hmmm. A lot of pain. I need something for the pain,” she mutters.

“Okay, manmi. Okay,” he says, as he takes her blood pressure. It’s high.

“You know, I am from the Philippines and it takes twenty-four hours to get home, manmi. I have to take multiple planes just to get to where I am from. You from Haiti?” he asks again.

“Yes, I am from Haiti. I lived in New York for twenty years. My children live here now,” she responds, peering at him with a scowl.

He draws her blood. “You’re lucky, manmi, Haiti’s not too far.”

He places a cotton ball in the crook of her arm and starts to apply the band-aid vertically.

I shrink in my seat and shoot an apologetic look to the nurse.

He laughs and says, “Okay, okay, no problem.” And replaces the band-aid.

After he leaves, my mother looks at me.

“Mwen wè figi ou, I see your face,” she says. “I know you think I was rude. These people, they are scared of you, afraid to touch you even, but we are the ones that should be scared of them. They think because of where you come from you don’t know anything or you haven’t been anywhere. You have to tell them.”

My mother spends the next five hours falling in and out of sleep, doubled over in pain, waiting for the sonogram results all the while urging me to advocate for her with the nurse, the orderlies, and JetBlue.

She wanted me to “Met fanm sou mwen”: to “woman up,” essentially. I was failing—I could see it on her face. During her time in the States, she had cataloged the instances where she had to deal with people who treated her with less empathy because of her immigrant status. I lacked the same catalog. Having returned to her home country, and firmly in her sixties, she had lost her patience for pleasantries. She was asking me to show up as my full Haitian female self for her.

Having returned to her home country, and firmly in her sixties, my mother had lost her patience for pleasantries. She was asking me to show up as my full Haitian female self for her.

Around 4am, they remembered she had requested pain meds and tried to give her morphine instead of the Tylenol she requested. She declined. The sun came up and she was discharged with no real diagnosis.

The “Women Like Us” dance piece I created for the Neustadt Festival was my way to respond to my mother’s “woman up” request while she was still here, the best way I knew how—attempting to make a piece of art.

On the first day of rehearsal, I asked the OU School of Dance majors to write down the names of the women in their family lineage, including nonblood relations who resemble family. The diverse group was more white than not, but also Mexican, Argentine, African American, Nigerian, and male.

Together we closed our eyes, said their names, walked in a circle, created braided patterns with our feet, curved our spines, rolled our hips, planted our feet firmly and released. One of the dancers began to sob as stillness settled in.

Together we closed our eyes, said their names, walked in a circle, created braided patterns with our feet, curved our spines, rolled our hips, planted our feet firmly and released. One of the dancers began to sob as stillness settled in. No one had ever asked her to name them, to praise them, to be upset with them. She said she missed her mother, and she made peace with her grandmother. Our work began with this naming ritual. Brenda, Effie, Nyanza, Shakia, Titita, Grace, and all the other women in their lineage became part of our piece.

Throughout the process, I had to give myself permission to create in hybrid forms. This is how I had always worked. Would my deconstructed Yanvalou be disrespectful to the folkloric culture? We pushed forward sometimes with the fluidity of the deity Damballah, the creator of all life, and other times with the clunky weight of contact improv, a contemporary dance practice. I sliced up Danticat’s text and rearranged it, hoping the artist in her would understand.

“Women Like Us,” Danticat’s epilogue to Krik? Krak!, features a narrator whose mother is disappointed that her young daughter is spending her free time writing in the era of the Duvalier regime—these are dangerous times. The narrator’s mother says to her, ”Writers don’t leave any mark in the world. Not the world where we are from. In our world, writers are tortured and killed if they are men. Called lying whores, then raped and killed, if they are women.”

I asked the dancers to expand and contract under the weight of the aforementioned text. They danced to “Se Bon,” a piece by Haitian performer Toto Bissainthe, who spent the majority of her career in exile for the content of her work. She sarcastically lists all ways the violence of patriarchy and governmental oppression in Haiti is good. “It’s good, I am telling you it’s good.” We added bits of gesture, found ways for the women to lift each other off the ground, as a metaphor for our constant emotional lifting. We spent half a rehearsal learning to breathe loud enough to be heard. Labored breath, I told them, was allowed. “I want to hear your effort, it tells me you are alive, trying,” I say. This is a constant in much of my work.

We made space for the difficult, the dangerous, and the tender aspects of womanhood. Allowing generations of women to whisper through us and to make our own choices perhaps counter to theirs.

All this I hope contributed to their understanding of embodying themselves, their mothers, their grandmothers, their grandmothers before them, and women across the waters who look nothing like them but who occasionally utter “Met fanm sou ou.” In developing the process, I respond to the call my mother is asking of me now, and Danticat’s mother asks her through a recorded cassette. I make something that feels like my full Haitian American self, and I “woman up.”

Editorial note: The performances of Women Like Us and ReBIRTH, by Rara Tou Limen, were co-sponsored by the OU School of Dance and the Oklahoma Arts Council, which receives support from the State of Oklahoma and the National Endowment for the Arts. 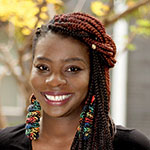 Marie Casimir is a Haitian American performer, writer, producer, and lecturer of African and African diaspora dance in the Clara Luper Department of African & African American Studies at the University of Oklahoma. She is the founder and director of Djaspora Productions, supporting and producing art that connects artists of color locally and globally. She is a co-founder and producer of the Instigation Festival, a dance and music festival in Chicago and New Orleans. A 2018 Ragdale Artists Fellow and recipient of a OneLove Nola Residency, she has served as an arts and culture consultant for the Consulate of Haiti in Chicago and associate director of Links Hall in Chicago. She choreographed Women Like Us, based on the work of Edwidge Danticat, for the 2018 Neustadt Festival at OU.