The Talus of Madame Liken

In this story from Asja Bakić’s debut collection, Mars, two women exist in a dangerous symbiosis.

Lichen: nature’s chaos. A body of algae and mushroom, the symbiosis blanketing the corpse found in the nearby forest. The police ruled it a violent death. Someone had covered the naked male body with lichen, all but the lips, gently parted.

My house was in the immediate vicinity; I watched the coroner, the police vehicles, through the window. Who would identify the deceased? No papers were found on him. No traces. I smiled—all these years, and this was the first body they’d discovered.

“Mrs. Liken!” a young policeman called through the open window.

“Could we ask you a few questions for our report?”

“Of course. I’ll do anything to help.”

All clichés. The medicine bottles worked in my favor. They were my alibi. I was sleeping. I didn’t hear a thing.

“I was sleeping. I didn’t hear a thing.”

“Thank you. Let us know if you notice anything.”

I noticed that you don’t have a clue. Should I tell them that? But ignorance isn’t suspicious. It would be strange were it otherwise.

I noticed that you don’t have a clue. Should I tell them that? But ignorance isn’t suspicious. It would be strange were it otherwise.

When the young policeman returned, I kept calm. He didn’t even know how to pronounce my last name, and I didn’t correct him. To appear even more convincing, I asked whether I was in any danger, whether I was safe.

“Don’t worry, Mrs. Leeken, we have everything under control.”

I acted as though a weight had been lifted from my heart.

It rained for days and the yard was unbearably muddy. Everything outside got drenched and morphed into an uglier version of itself.

The policeman kept coming by, grasping for every little crumb, genuinely worried because the investigation hadn’t yielded anything. He asked me to describe my neighbors.

“You see how far away our houses are from one another.”

“Sure, I understand,” said the policeman, “but still—the town has a general store, a bar and restaurant, a gas station. . . . Surely you know some of your neighbors.”

“We’ve met,” I replied, “but it’s not polite to inquire about the details of other people’s lives.”

As soon as the errand boy left, I plopped down on the sofa. There was some reality TV show on about a famous American family. I enjoyed sticking my nose in other people’s business, watching them get tortured by the shit they’d been dealt. You could learn a lot from the fools on TV, just as you could from everyday life.

Right as I was about to change the channel, someone knocked on my door. I thought the policeman had returned. I cracked the door open just enough to peek out and kindly say that I was busy. A young woman stood on the porch, sopping wet. She asked if she could come in. She seemed exhausted.

She had addressed me as “neighbor,” but I’d never seen her before.

“Where did you come from?” I asked once she was inside.

“From the north,” she said curtly.

She was shivering. I gave her a clean towel and clothes to change into. She took them without a word; she didn’t even thank me. I returned to the sofa. I heard the young woman undressing in the bathroom. If I had to describe her succinctly, I’d say she was very beautiful. Later I’d reflect on her appearance, but at that moment it didn’t mean much to me.

“You said from the north, but where exactly?” I asked when she reappeared.

“The mountains,” she replied. “I live in a cottage near the lake.”

“Did your car break down?”

“It’s not the season for walking,” I said. “It’s cold, and people are idiots.”

A kindred spirit, or a victim? I couldn’t immediately tell. I stared at her curiously, unable to control myself. Her hair was gathered into a bun. She’d thrown on my sweater, which was too big for her. Then, completely by accident, I noticed her feet.

“Do you come to town often?”

“I wouldn’t call this place a town,” she said.

I wasn’t thrown off.

“Do you come down from the mountain often?”

I asked how she made a living, whether she had anyone to keep her company.

“I have hunting dogs. I’m not alone.”

I made tea for both of us. The young woman drank hers slowly, like she was in no hurry to leave, but as soon as the rain let up, she collected her clothes, slipped on her boots, and made her way to the door. She thanked me for the sweater, said she’d return it as soon as she could. She waved and then disappeared into the mist. I was excited. I’d forgotten to ask the young woman her name.

When they found the next body in the woods, it wasn’t mine. I asked around to find out who the victim was—a local man who’d had a bad reputation for illegal hunting. He hadn’t deserved to die, though. The news hit me hard; we’d been good friends. I knew that he’d been struggling with financial problems. Maybe he’d owed the wrong people money and couldn’t pay?

The days passed slowly. The weather worsened—winter was finally arriving. No one could get to the lake; the road was pure mud. I didn’t leave the house. I’d call the store with a list of supplies to be delivered. Everyone in town knew one another, of course. We were like family, but the police didn’t need to know that. The death of our neighbor had shaken us. Some more, some less, but no one was unaffected.

I’d never hurt my neighbors, but strangers meant nothing to me.

A powerful storm is the most thrilling weather. I watched it through the window: the thrashing trees, things flying through the air that weren’t meant to leave the ground. The colors were impressive. Everything outside matched my mood. I was standing as usual at the window, listening to the thunder, when I noticed the young woman approaching. I couldn’t see which direction she’d come from. I opened the door as soon as I heard her steps on the porch.

“You always come at an infelicitous moment,” I said.

She didn’t know what “infelicitous” meant.

“What are you doing here?” I asked.

“I came to return your sweater.”

“Now? In such terrible weather?”

“The weather is ideal.”

She wasn’t wet at all. It was like the storm had skipped over her completely: there wasn’t a drop of water on her raincoat.

“Your sweater,” she said.

She pushed it under my nose.

“There really wasn’t any rush.”

The young woman wore her muddy boots through the entryway and into the living room, but she didn’t care. She flung herself into an armchair and allowed me to watch her for some time in silence. My excitement grew palpable. The last time I’d been this excited was while beating that young man to death, the one who’d been found in the woods not long before. While I was killing him, I had to wipe my mouth with my sleeve every now and then because I couldn’t stop salivating.

The last time I’d been this excited was while beating that young man to death, the one who’d been found in the woods not long before.

I briefly escaped to the kitchen to calm down. I forgot to make the tea. I was still clutching the sweater.

“Aren’t you afraid of being out in this weather?” I asked the young woman. “The thunder is terrible.”

“I’m not afraid of thunder,” she said.

“Did you know the man who was murdered?” she asked suddenly.

Her tone surprised me. It was accusing.

“Which one? They found two.”

I was overtaken by suspicion. Maybe she worked for the police. She seemed intelligent. She would understand what the young policeman couldn’t.

“It was shocking that they found the body so close to my house,” I said calmly.

The creeps? I didn’t know what the creeps felt like. I’d never felt them.

While saying this, I felt a hole in my sweater. It was big enough to fit my index finger through. It seemed to have been made by a bullet.

“Your friend,” the woman said, smiling, “was wearing that sweater when he died.”

I looked at her in disbelief.

We stared at each other across the table, where the young woman had propped her muddy boots. She was letting me know that she was now the master and I the apprentice, one who still had much to learn about the art of violence and suffering. My head began to hurt. I felt a pressure in my temples, as if the young woman had taken my head in her hands and begun to squeeze.

“I don’t plan on staying long,” she said, not budging.

I contemplated my next move. There was a model airplane close at hand; I could bash her head in with it. But I quickly dismissed the idea. The young woman looked toy-proof.

“Do you often go hunting?” I asked to distract myself from my headache.

Instead of answering, she reached into the backpack she’d brought with her and retrieved a thin notebook.

Her drawing of the line across the paper lasted an eternity.

“You mean the sweater?” I asked.

She didn’t answer. She returned the notebook to her backpack and finally stood up.

She paused for a moment at the door.

“That young man was important to me.”

No more would she call me “neighbor.” We’d returned to being strangers.

We didn’t shake hands at the door; she didn’t even acknowledge me. While she was walking away, I saw—or it seemed to me I saw—that the young woman’s muddy boots had been replaced with gold sandals. At the very edge of the property, near the road, before she was lost to the landscape, her silhouette no longer had a backpack thrown over its shoulders. On an unfamiliar back hung a bow and arrow. I recalled the naked man’s body, his lips—gently parted. I wanted them to breathe in the air once more. I shivered, I’d like to say because of the cold. But my reality had completely changed. I could no longer lie so calmly.

Translation from the Croatian

Editorial note: Mars is forthcoming from the Feminist Press in March 2019. 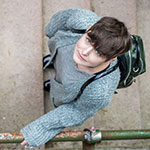 Asja Bakić (b. 1982) is a Bosnian poet, writer, and translator. Her second book, a collection of short stories entitled Mars (2015), was shortlisted for the Edo Budiša Award. She currently lives and works in Zagreb, Croatia. 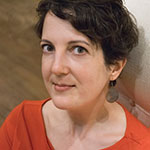 Jennifer Zoble is a writer, editor, educator, and literary translator. She coedits InTranslation and teaches academic and creative writing at NYU.